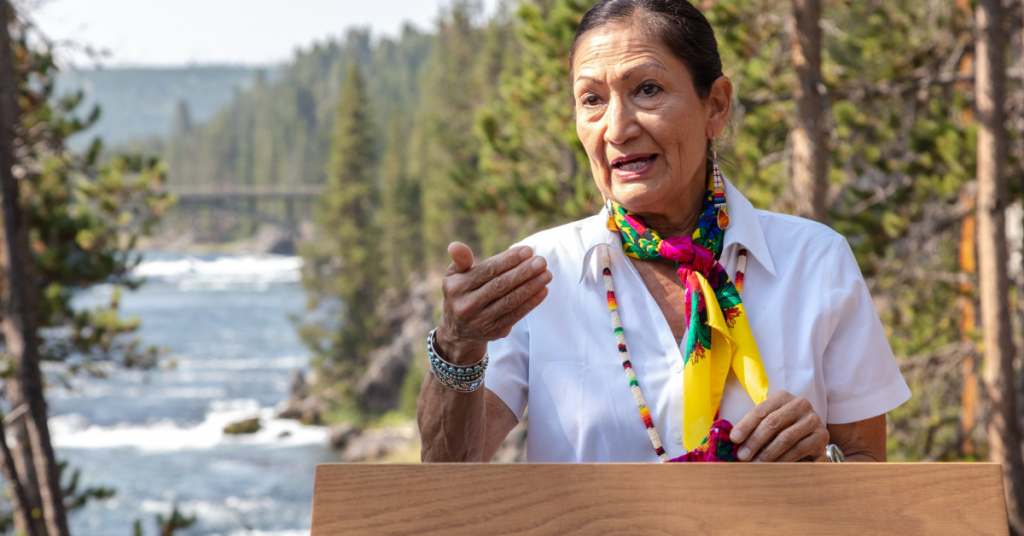 The group also discussed the $4 billion allocated in the Inflation Reduction Act for water management and conservation efforts.

However, one group was noticeably missing Wednesday: Republicans.

Rep. Connie Conway (R–Tulare) issued a statement welcoming Haaland to her district despite not being invited to join the secretary.

“While it’s disappointing that Secretary Haaland did not invite a single Republican Member of Congress to any of her events or meetings, at least she considers the Valley a worthy stop. With the extreme drought currently affecting the Valley, where most of our nation’s food supply is produced, I hope this visit represents a change of heart from the Biden Administration’s disastrous water policy decisions that have led to zero percent water allocations and farmers and communities running out of water,” Conway said.

“Despite the exclusion of Republican Members from her visit, I welcome Secretary Haaland to the Central Valley, the breadbasket of the nation. I hope the Secretary sees more than the inside of a conference room and visits our farms and communities, like Orosi and Tooleville, that are struggling with severe water shortages.”

Earlier this month, Conway joined Reps. Kevin McCarthy (R–Bakersfield), David Valadao (R–Hanford) and the entire California Republican delegation in sending a letter to Haaland that expressed their concerns with the Biden Administration’s decision to throw out the 2019 biological opinions for water deliveries from the Central Valley Project and the State Water Project.

The letter called the decision a “highly irregular departure from common practice” and speculated that “outside entities may have exerted undue influence on the decision.”

“We have not received a response to this letter from Secretary Haaland or any substantive response to multiple requests for an explanation as to why the Department began reconsultation, a process expected to cost more than $15 million of taxpayer money and further exacerbate the ongoing drought,” Conway said.

“I continue to be deeply concerned by the reconsultation decision. The entire process is clearly being orchestrated in order to stop more water from reaching Central Valley communities. The Interior Department needs to comply with Congress’ demands to see its records.”