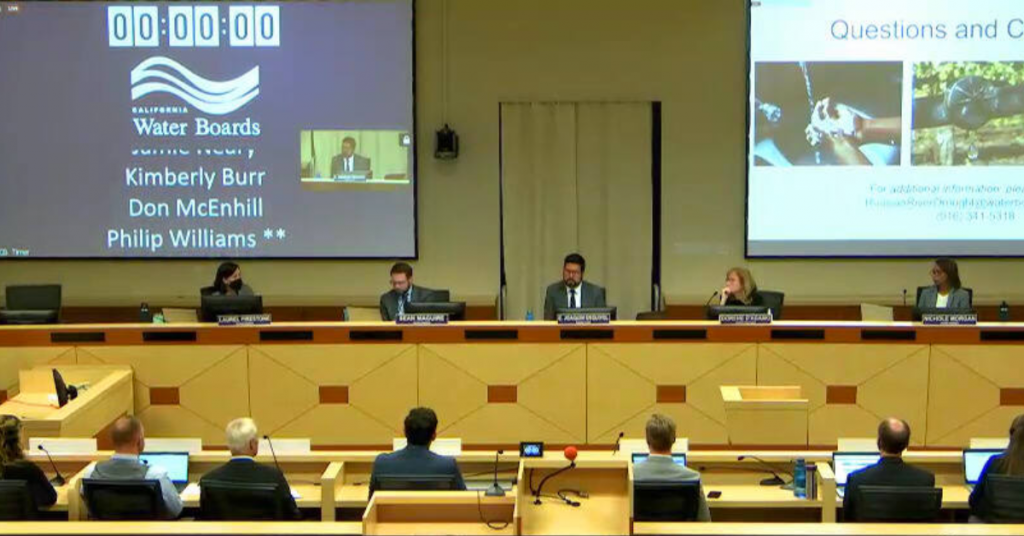 The State Water Resources Control Board had staff conduct a workshop to garner public input on the Board’s racial equity plan. The two and half hour workshop was held in Visalia at the Self Help Enterprises’ headquarters at 4pm on Wednesday, July 27 – the same day as the drop-dead deadline for many of the San Joaquin Valley’s Groundwater Sustainability Agencies to submit their revised Groundwater Sustainability Plans to the state’s Department of Water Resources.

In November of 2021 the State Board adopted Resolution No. 2021-0050, “Condemning Racism, Xenophobia, Bigotry, and Racial Injustice and Strengthening Commitment to Racial Equity, Diversity, Inclusion, Access, and Anti-Racism” a resolution to incorporate racial equity in its decision making and hiring practices.

Page five of the resolution, Whereas number 22 – “. . . the national and worldwide backlash against racism toward Black people and related Black Lives Matter protests of 2020 accelerated and informed the Water Board’s decision to develop and initiate, resolution and subsequent action plans to address racial inequities within the Water Boards and through the Water Boards’ work.”

The resolution was peppered with statements such as, “Historically, the Water Boards’ programs were established over a structural framework that perpetuated inequities based on race.”

And, “White supremacy is a systemically and institutionally perpetuated system of exploitation and oppression of nations and people of color by white people for the purpose of maintaining and defending a system of wealth, power, and privilege.”

The resolution calls for an Office of Racial Equity within the State Board organization and a  Racial Equity Action Plan to be developed. Haven’t heard much about the establishment of a Racial Equity Office but there were four workshops held during July for the public to share its ideas and suggestions.

The State Board is serious about this.

There was even a quote on the State Board website by Executive Director Eileen Sobeck from August of 2020, “There could not be a more critical challenge facing us at this time than the challenge of achieving racial equity.”

By the way BIPOC is shorthand for Black, Indigenous and People of Color. Some people use it as the buzzword to establish the delineation of ancestry based on skin tone and assigning them into either oppressor or oppressed.

Besides the fact we’re all indigenous and all people of color but for the unfortunate, occasional albino, this is the very definition of racism – judging people by the hue of their skin instead of the content of their character.

With all of this as background I stepped into the State Board’s workshop in Visalia with some trepidation. After all I am a man, predominantly of European extract and believe Critical Race Theory is part of an evil, communist plan to enslave humans by removing the freedom afforded by worshiping a God greater than ourselves. What could go wrong?

Actually nothing went wrong. The State Board staff were very considerate, friendly and even fun. There was a live, video presentation by Board member Firestone. She kept to the point and I don’t want to sound mean here, but she often spends a lot of time giggling when I’ve seen her in the past. Don’t get me wrong, it can be endearing in certain circumstances. And, the bare bone fact is I would prefer her giggling to many of the utterances made by some public officials. However, it would have been a better meeting if Firestone had stayed with us and answered questions.

But the heavy load was carried by the ladies in the room working for the State Board, all of whom I believe were Hispanic. Normally that wouldn’t merit mention but since the topic of the  meeting was race, well there we go. After the summer of Black Lives Matter and the Brown Shirt tactics of Antifa we’re raw on the subject. People are scared to be labeled racist for mentioning race. Unless you are a racist, don’t be scared.

I have been called a racist and a xenophobe. I didn’t like it but since I’m neither of those things I realize those who made the claims are bigots and ignorant of my life and who I am. Reverend Martin Luther King Jr’s famous quote, “I have a dream that my four little children will one day live in a nation where they will not be judged by the color of their skin, but by the content of their character,” still holds true for my generation. God Himself says He judges the heart, not the exterior and warns us to do the same.

In a May 17, 2021 essay in National Review by Christopher Caldwell on Critical Race Theory, he mentions a cartoon that has been used extensively by racial equity proponents. Caldwell writes cartoonist Craig Froehle created a drawing in 2012 labeled, “Equality to a conservative, equality to a liberal.”

However, the short guy now has two crates and can also see over the fence – this is supposed to represent equity – the same outcome for all.

As Caldwell wrote, “Froehle’s drawing may be a satisfying lesson about why children should share, but as a depiction of how adults reach political compromise it is misleading.” Very misleading. No mention why the three couldn’t purchase tickets and attend the game in the stands. Right from the start the concept places the three characters outside of the mainstream of participation. There wouldn’t be a baseball game to watch if everyone was standing outside the fence.

The possessions the political activists want to swap aren’t crates. They are the goods that lead to a better future; home ownership, your children’s education and the reward for working a job. In the case of the State Board’s efforts considering the magnitude of water’s importance to all living things, that’s a major responsibility to determine whose possessions should be swapped. Rights, including water rights are just that, rights. They are not privileges or favors granted by the government. And while the people of the United States are not perfect, and neither is our state or federal governments, the goal is to form a more perfect union. It takes hubris to think the institutions can’t be improved but rather torn down and replaced with the current trends from the academic lounge.

Read the full column at WaterWrights.