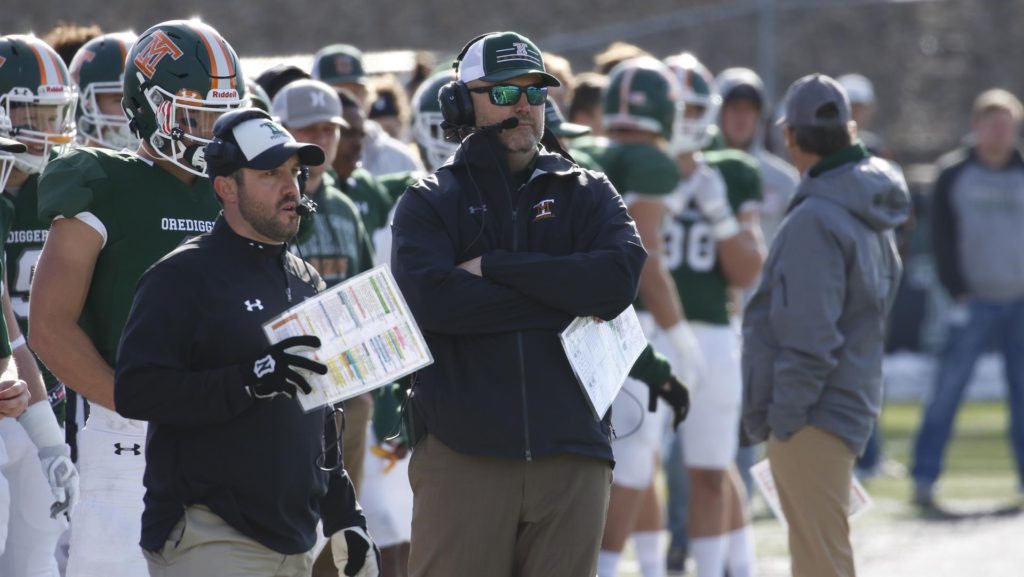 When Kalen DeBoer called Chuck Morrell to offer him a job at Fresno State, the answer was an obvious one for Morrell.

“It was 10 seconds and then yes,” Morrell, an assistant coach and safeties coach, said. “I think it’s partly because once you get to a certain point in your coaching career, to me it’s never been so much about the level or where I’m at. I always think you make it to big-time wherever you’re at, but you find out that there are certain people that you absolutely love working with and you have a special relationship with.

“I trust Kalen implicitly with who he is as a person and how he runs the program.”

DeBoer, Fresno State’s head football coach, brought Morrell in to coach the safeties. Morrell joins the Bulldogs after serving as the head coach at Montana Tech – an NAIA school in Butte, Montana – from 2011-2019.

Like many other coaches on the staff, the duo’s history and relationship isn’t new. It goes back to when they were both in college at the University of Sioux Falls in the 1990s.

“It was always funny because I got to go line up against him,” Morrell said. “We’d do one-on-ones, and I’d line up against Kalen every day back when we both could run more than five steps without pulling a hamstring. He was a fantastic teammate and a fantastic leader, and you could see that early on.”

DeBoer remembers Morrell as being a standout player, and noted that Morrell was so respected that he ended up serving, in a sense, as a player-coach.

“With the way things worked, he was actually asked as a player to take on a heavy role in even teaching and passing on the information to the rest of the program, the rest of the defense in particular – that trusted even back then as a player,” DeBoer said.

The pair were part of the 1996 NAIA National Championship winning team, the highlight of their playing career.

After Morrell’s playing days finished up, he had plans to attend medical school, but he just wasn’t able to step away from the football field. He joined Sioux Fall’s coaching staff as the defensive backs coach in 1998 and was named the defensive coordinator the following season.

“You play your last game and you know that you’re just not done with it,” Morrell said. “It’s a tremendous relationship that you build with the game, and you just can’t let it go and you can’t leave it alone. It’s a strange addiction to be honest with you. You just love the game so much. You can’t get away from it.”

Morrell was also responsible for DeBoer’s return to Sioux Falls, which was his first college job. In 2000, the offensive coordinator at Sioux Falls left the program shortly before the season started, so Morrell knew he had to approach DeBoer – who was an assistant high school coach at the time – for the OC job.

“I went out and begged Kalen to come back and get into college coaching,” Morrell said.

It was a perfect fit. Morrell served as the defensive coordinator until 2009, and DeBoer became the head coach in 2005 and left after the 2009 season. DeBoer and Morrell led Sioux Falls to national championships in 2006, 2008 and 2009.

After they parted ways, Morrell spent a year as the defensive coordinator at South Dakota before taking over as head coach at Montana Tech.

Even though they wouldn’t coach together again until this year, they still talked on a weekly basis.

While at Montana Tech, Morrell had an opportunity to learn about Fresno State because former Bulldogs head coach Jim Sweeney was originally from Butte.

“I don’t know how many people know a lot about Butte, Montana, but it’s a mining town,” Morrell said. “It’s a tough, blue collar, very edgy community. I really see that in the history of this program and what Fresno State has meant in terms of tradition. Just that blue collar work ethic, that love for family, that care that we should have for one another.

“You can definitely see that in the community that I came out of, that coach Sweeney grew up in… And to see what the legacy of this program is today, that’s something I’m really big about, being a part of something special. There’s no doubt that coach Sweeney laid a very special foundation that’s carrying through to today.”

Now Morrell finds himself in the program that Sweeney built as he transitions back to life as an assistant coach. For DeBoer, it was an easy decision to call his old friend and teammate and offer him a spot at Fresno State.

“I just know the standard that he operates with, and it’s an extremely high standard,” DeBoer said. “The way he’s able to communicate expectations to players is something special. When you communicate expectations and you hold them accountable to it, the guys love that, because that’s really what they want. And he’s one of the best at doing that that I’ve ever been around.”