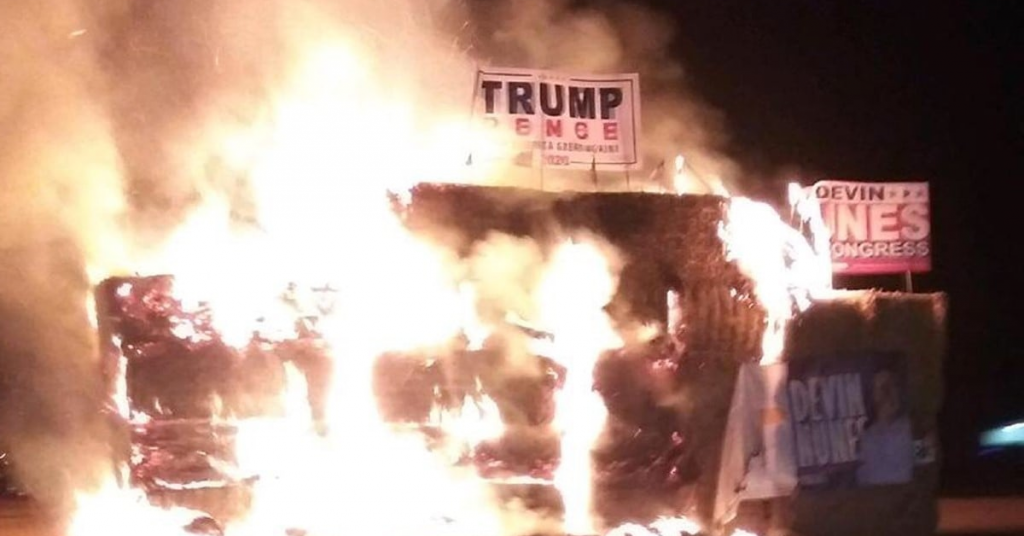 For the second time in as many weeks, a haystack sitting on the corner of a nondescript intersection in rural Dinuba went up in flames in an apparent arson.

For many, including the farmer himself, the reason was simple: the haystack had signs supporting President Donald Trump and local Congressman Devin Nunes (R–Tulare) in their respective reelection bids.

Farmer Jon Dolieslager owns the parcel of land that has become the home of repeated, apparently politically-motivated arson. Dolieslager runs the Tulare County Stockyard, a Dinuba-based livestock auction house, along with raising his own head of cattle.

The first arson, which occurred in the early hours of Sept. 29, took down roughly $5,000 in hay along with banners promoting Nunes and Trump.

The second arson occurred late Saturday night. Dolieslager said he received a call alerting him to the fire at his corner property at Avenue 384 and Road 80 around 9 p.m.

By midnight Sunday morning, the fire had run its course.

Speaking to The Sun on Sunday, Dolieslager said the second assembled haystack was the last cutting of prime alfalfa hay from his own farm.

“It was a huge risk,” Dolieslager said of installing another haystack for signage. “But we took it anyways.”

Much like the first arson on his property, Dolieslager doesn’t know who exactly is responsible for the thousands in damages to his property, but he isn’t uncertain their political bend.

“They’re undeterred to burn and loot,” he said of the unknown arsonist.

As for the toll of the fire on his farming enterprise, the Dinuba farmer said that the blaze took out what remained of his hay supply to feed his cattle and there’s no insurance policy available to protect against this kind of property crime.

“No insurance company in the nation would insure farmers’ haystacks against fire damage with the state’s liberals lighting everything on fire and generating intense wildfire seasons,” he said.

Since the fire was extinguished, Dolieslager said he received an outpouring of support to – once again – rebuild the corner in support of the President and longtime Congressman.

This time, flammability is at top of mind.

After receiving calls from Tulare County farmers – many of whom led the charge to bring Trump to the region in 2016 for a campaign fundraiser – Dolieslager’s property will now be home to a stack of shipping containers to be used for signage posting.

Similarly, local members of the Latinos for Trump coalition and neighbors offered to help clean up the property following the damage.

As for solving the Dinuba farmer and livestock auctioneer’s immediate problem – feeding his cattle – local farmers, dairyman, and neighbors offered to provide hay and other monetary support to keep him afloat.

For Dolieslager, that’s a solvable problem. His focus equally remains on the outcome of Nov. 3.

“We’re too close to give up,” Dolieslager reflected. “And we have many folks here willing to put their money where their mouth is.”