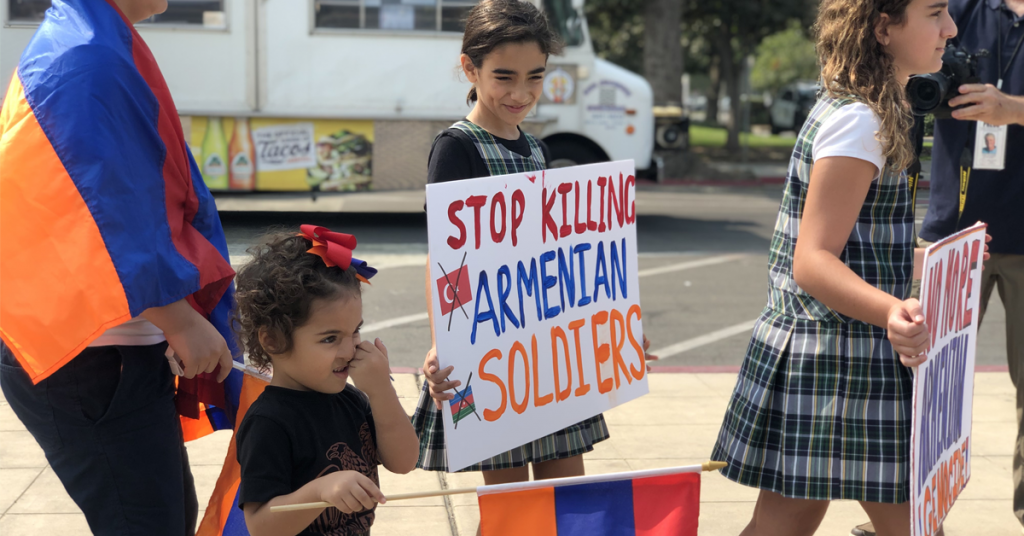 The Armenian flag isn’t unfamiliar among the flagpoles of Fresno’s City Hall.

Instead, Fresno city leaders raised the Red-Blue-and-Orange as part of a rallying cry for the city’s outsized Armenian community following weeks of fighting between Armenians and Azerbaijan in the Artsakh region, often known as Nagorno-Karabakh.

An Armenian population control a vast portion of territory bordering southwest Armenia in what is internationally recognized as Azerbaijan.

Armenian and the Azeri forces disputed the territory under Soviet rule. Following the break-up of the Soviet Union, an independence referendum was approved by roughly 82 percent of the Nagorno-Karbakh population. The remaining 18 percent were made up of boycotting Azeris.

The ceasefire has been difficult to maintain, with the most recent clash between the two sides occurring in April 2016.

A Wednesday flag raising and prayer from the city’s Armenian clergy followed three straight nights of demonstrations by local Armenians at the heavily-trafficked intersection of Blackstone and Nees avenues.

“It’s a reminder and an affirmation that this generation will not allow what occurred in previous generations – violence on innocent civilians and genocide – to occur without doing or saying anything,” Arias said before the flag raising.

“We ask for an end to the dangerous stretch against the Armenians and pray for a path to peace and safety for everyone in the region,” Brand said.

Chavez, referring to himself as an “Odar,” a common Armenian phrase for a non-Armenian, reflected on the annual flag raising to commemorate the 1915 Armenian Genocide, which ended the lives of an estimated 1.5 million Armenians at the hands of Ottoman Turks.

“I find myself thinking ‘What would I have said at that time?'” Chavez mused. “Well, today is that day when we can all collectively say not only do we see what looks to be history repeating itself, but we condemn the violence against innocent civilians and children.”

Chavez called on the Federal government to intervene to help Armenians in the contested region ensure their sovereignty.

Meanwhile, Karbassi argued that the current conflict was “collateral damage” from the failed ideology of the Soviet Union spilling over into the fractured region in 21st Century.

Noting that Armenians living in the Artsakh region voted in support of an independence referendum in 1991.

“Folks, this is about self-determination,” Karbassi said. “This is about supporting a people who support a fundamental American value.”

No Fresno-based state or Federal representatives were in attendance, though nearly all have issued statements in support of Armenia and denouncing the violence.

Arias noted that the Fresno City Council would take up a resolution condemning Turkish and Azeri-led violence and pushing for recognition of Nagorno-Karabakh as an independent nation at a special City Council meeting on Monday.

“I am confident that our Council and our Mayor – both current and future – will be supportive of this resolution and sending a crystal clear message to the world, to the country, our President and our Congress that Armenians in our community require our protection, our advocacy, and our solidarity,” he said.