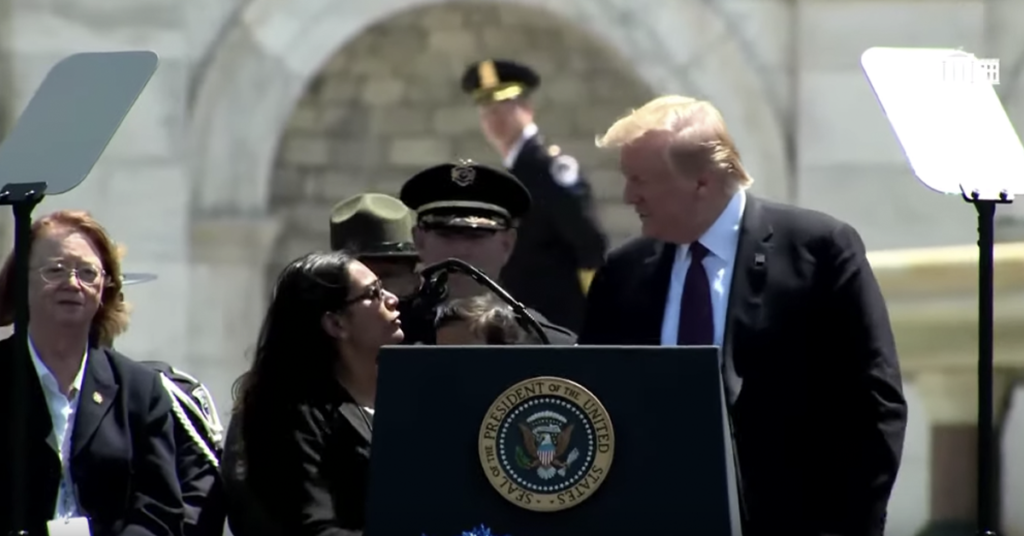 In the midst of the National Peace Officers’ Memorial in Washington, the spotlight once again shone on the grieving family of Newman Police Cpl. Ronil Singh.

President Donald Trump paid homage to the fallen Newman Police corporal who was killed the day after Christmas last year by an illegal immigrant, who subsequently attempted to flee California for Mexico.

The man, Paulo Virgen Mendoza, was ultimately apprehended in Bakersfield two days after the homicide.

“There will be justice. Justice will happen.”

Reggie Singh, the Newman Police corporal’s brother and family spokesman in the aftermath of his death, took to the microphone to address the crowd of police officers and families of the fallen.

“This man over here, whatever he’s doing for law enforcement, we support him,” Reggie Singh said, pointing to Trump. “His team at the White House has reached out to us multiple times, I don’t think that has ever happened before.”

Concluding, Singh said: “This man is amazing. My family supports him.”

Reggie Singh joined Trump at the Texas-Mexico Border in McAllen, Tex. to tour the border and discuss boarder security.

With the family’s 10-month-old child in tow, Anamika Singh thanked Trump for staying in touch. She originally had not planned to make a statement at the event, but changed her mind on stage.

“I actually want to thank you personally, you’re the only one that actually reached out,” Singh said. “And gave your condolences to the family and it actually means a lot to all of our law enforcement families that are here.”

With her voice breaking and fighting back tears, Anamika Singh reminded Trump and the audience why they were there.

“Every family sitting out here wants justice for what happened to their loved ones,” she said. “And that’s what I want for my husband.”

During the address, Trump directed some of his effort to calling for beefing up federal immigration laws.

“Not one more life should be lost because our lawmakers fail to secure borders,” Trump said in his call to action for immigration reform.

Trump earlier argued that Mendoza was a “vicious killer” who could have been kept out of the United States had there been a border wall or with “whatever the hell it takes.”