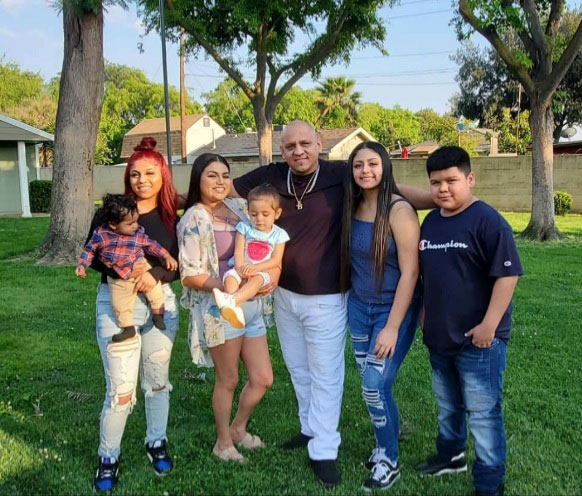 Armando Alvarez II’s family members led him into and out of gang life, introducing him to drugs and alcohol before he entered junior high and then eventually to drug dealing and violence. It was an older brother who brought him to the church 20 years later where he had what he describes as a miraculous conversion.

Now Alvarez is working to be a similar, positive big brother figure to help others break free of the cycle of violence. Community Regional Medical Center and UCSF Fresno have secured grant funding to pay Alvarez as a gang intervention specialist to meet with willing patients who end up in the emergency department because of their association with gangs.

Sometimes the seed he plants during those encounters takes months to come to fruition, and he gets a call asking for help. They remember his story. How he went from gun-toting drug dealer to becoming a husband, father of four, resource counselor at a Fresno Unified School District middle school, a gang redirection counselor with Comprehensive Behavioral Services working with youth on probation, a minister at River of Life Church and doing intervention work at the downtown Fresno emergency room.

One-fifth of trauma cases are due to assault

“We’re one of the busiest trauma centers in the state, and we’re seeing so many injuries caused by violence. And it’s serious trauma, caused by gunshots and stabbing,” says Eliana Troncale, Community Regional’s injury prevention coordinator who helps connect Alvarez to patients. Nearly one out of every five trauma patients treated at Community Regional is a victim of violence whether by guns, knives, blunt instruments or fists. The hospital houses the only Level 1 trauma center between Sacramento and Los Angeles providing life-saving care annually for more than 3,000 patients with critical, severe injuries.

“Since 2019, we’ve seen a big uptick in numbers of pediatric patients being injured due to violence,” Troncale adds.

In recent months, despite lockdowns from the coronavirus pandemic, violence – especially gun violence – has escalated in the Fresno area. Last year Community Regional emergency department staff treated 33 people with gunshot wounds compared to 37 gunshot victims in the first 10 months of 2020, on pace to be a 34% increase.

Troncale and Alvarez’s work is part of the hospital’s community benefit investment to help create a healthier region by reaching outside typical medical care to get to the root of what lands people in the hospital. Violence and injury prevention is one of the area’s top identified health needs in the 2019 assessment by local hospitals and community benefits address these.

Past studies show 50% of trauma deaths could have been prevented with behavior changes such as wearing seat belts or climbing ladders only with support and safety precautions, notes Dr. Andrea Long in a grant proposal for Community’s intervention program. But violence prevention takes more than education and requires “targeting at-risk individuals by reaching into the greater community,” writes Dr. Long, a trauma surgeon at Community Regional and UCSF assistant clinical professor of surgery.

Dr. Long, along with co-investigator Dr. Rene Ramirez, an emergency medicine physician at Community Regional and UCSF faculty member, and Troncale are conducting a pilot study to see if intervention with gang violence victims while they’re recovering in the hospital might help interrupt the cycle of violence and reduce the number of those getting hurt again – or hurting others. Since November 2017, Troncale had been approaching victims of violence in the emergency department to see if connecting them to someone like Alvarez and to other community resources might make a difference. Alvarez started his work as a volunteer but now is paid through grants for his outreach.

That help might be providing school supplies, or a bus pass and clothes to help them keep a job. Sometimes it’s a deposit on an apartment and first month utility costs so the family can move to a different neighborhood.

Having a research study already in progress has helped Community Regional secure additional funding from the state in partnership with the Economic Opportunities Commission and Fresno Police Department. “The state was really looking for an evidence-based program,” says Troncale.

“We count it as success if they don’t get injured again, and they don’t come back to us,” Troncale says. “And so far not one of the patients who have gone through this has been in the hospital again. And one former patient is now an advocate himself, speaking to groups of teens and leading rallies against violence.”

Troncale counts Alvarez as the key to the program’s accomplishment: “Armando has had such success because patients recognize he’s just trying to help and he cares about them.”

Alvarez is humble about his work: “Even without the titles or the job, my life would consist of meeting with people and families that are hurting, because I know what it is like. All I try to be is that beacon, to be that light in the darkness so they can see there is more to life and you can have a new life. I’m proof of it.”

The night before Armando Alvarez’s radical transformation, he had been planning to kill someone. “I was drug dealing at the time, and I got shot at by somebody,” he explains. “It was in my heart to go and kill this guy … I wanted to eliminate the threat.”

He just needed his brother’s help to hide a gun. His brother refused.

“I lost it. I cursed him and said all kinds of hurtful things. I even told him, ‘You’re half the reason that I’m still living like I am.’”

Alvarez says his big brother let him tag along at an early age: “I grew up around drugs and gangs. I grew up watching big brother do his thing. That’s exactly what I wanted to do… be a gang member with the partying and the lifestyle. I was 11 and hanging out, getting into cars with the wrong people, smoking weed, drinking 40s. I ended up dropping out of school in tenth grade.”

Alvarez lived that life of drugs and violence until his epiphany at age 32.

That same brother who led him into gangs had long given up that life. When Alvarez called to apologize the day after their fight over a gun, his big brother invited him to come along to church that evening. “I had been to church before. I went in high, paid my respects to God and then went out and took care of business and lived the life I felt I had to live,” Alvarez says. “Before I would do violent things, I would ask God to look out for me.”

Alvarez continues, “But on this particular night, which was March 30, 2011, I had an encounter. It was beyond anything I can explain.”

“I was highly addicted to methamphetamines. I used to stay up 18 days at a time. I needed it to even function,” Alvarez describes his state of mind going into church that night. For years, he had been cycling in and out of partying until he crashed. And he would spend days hiding in embarrassment after his long drug episodes.

“I’d stay home by myself, my bullet proof vest on, gun on the table, just sitting there thinking about life. I would always reflect back to seventh and eighth grade and think ‘Maybe if [I] could’ve just made a different decision.’ I would go back through the past and all the things I could’ve maybe changed and the different direction I could’ve taken. But I chose this,” he says. “Then I’d get up, shower up, throw on my shades, my loafers and my watches, and all my chains, and then turn my phone back on and get right back out there.”

That rainy March night, Alvarez says he heard those same what-if conversations he’d been having with himself come out of the pastor’s mouth in detail. “It blew my mind. In the world I was living in there’s a lot of paranoia. I wondered if someone had videotaped me,” he said.

He wavered back and forth but turned toward the voice that asked him to give it all up. He found himself on his knees at the altar, interrupting the service as he rocked and cried. “You have to understand, the person I was didn’t have room for tears,” Alvarez explains. “Half of the guys doing the things I was, do it because they don’t want to have emotions, they don’t want to show tears, or the hurt and the pain that got them to where they are.”

Alvarez says he saw the scenes of his life flash before his eyes, and for the first time he felt guilt and shame for the violence he did and his disregard of others. With each scene and each shout of “I’m sorry!” he said he felt like heavy chains were being removed.

“Here’s the kicker, when I went home that night I had some of the best sleep I had ever had,” Alvarez says. “And as much as I used to use drugs, you just don’t wake up one day and say I’m done. But when I woke up the next morning, I woke up like I had never taken drugs. I realized I could taste again. It was amazing to sense life again … So I’ve been working ever since for the glory of God.”

Alvarez says his circumstances didn’t just get better overnight, but he did ditch his guns and drugs and gang affiliations immediately. He started going to church, working minimum-wage jobs and telling anyone who would listen about his change of heart. He got better jobs through connections at church and his criminal record was eventually expunged.

“I was going out on the streets and talking with people and trying to help them find jobs and to stop the violence,” says Alvarez, who is grateful to Mike DeJuarez, executive director of the Central Valley’s Helping Other People Evolve Coalition, for providing him more formal opportunities for doing the same kind of outreach. “I became part of the HOPE Coalition and the Restore Project and then the grant came through for Community Regional, and I was asked to be part of their efforts.”

Now he tells this story to patients and victims of violence. “So much has happened in a 10-year span,” Alvarez says. “I was living that life not knowing if I was going to end up in prison or dead. My old friends laughed at first when I told them I was done. I knew if I could be delivered like that and wake up feeling like a new person, it was a chance at a new beginning.”

He’s reaching out to offer others that same kind of new beginning.