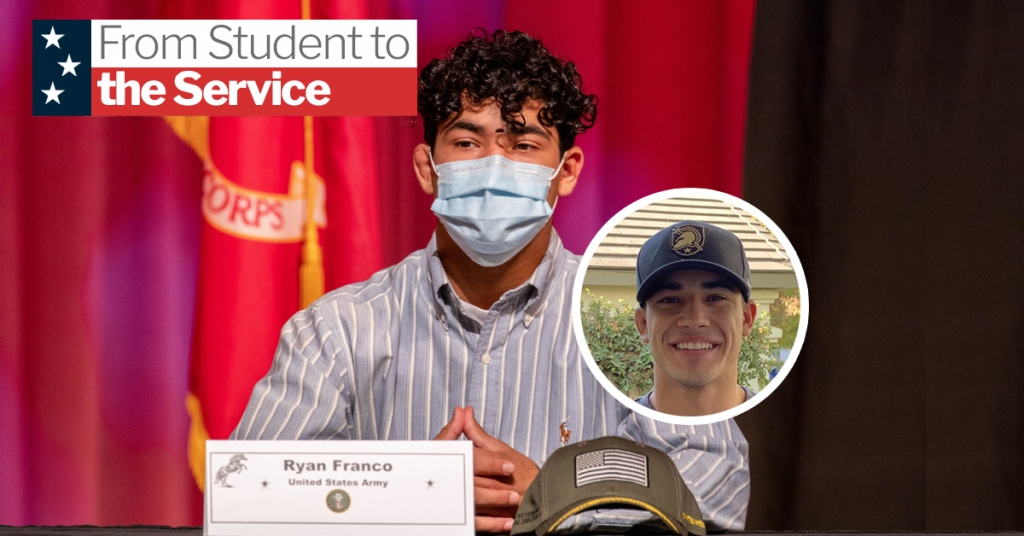 Ryan Franco, a Clovis North High School senior, is taking his talents on the wrestling mat to West Point.

Franco will head to the U.S. Military Academy at West Point, where he will spend his next four years completing a rigorous academic program before moving on to serve in the Army.

Since he has been wrestling since the age of four, Franco saw West Point as the best place to continue competing on scholarship.

“My parents have just been pushing me to be the best I can be, and I saw that West Point decided to choose me. I looked over all the other colleges, and I decided that maybe it might have been mediocre just to go to my normal college,” Franco said.

“My parents have always taught me mediocrity is not your goal. You want to be better. You want to be the best that you can be, so I chose West Point. I get to serve as well as get into a school that’s prestigious – Ivy League, almost.”

While other schools such as the Naval Academy and the University of Tennessee at Chattanooga were interested in having him wrestle, Franco zoned in on West Point when the Military Academy came calling.

“None of them I took really seriously until West Point called, and then I knew at that point that I wanted to go to West Point,” Franco said.

Although military service is an immense commitment that takes enlistees away from their families for long stretches of time, Franco said his parents have been fully supportive of his decision, which would make him the first in his immediate family to serve.

“They’re all for it,” Franco said. “They want me to go. It’s kind of like a landmark in our family.”

Franco plans to study structural engineering at West Point, which has been an interest of his since childhood.

One of his friends has a family member who helped construct the Golden Gate Bridge, which inspired him when he heard about that.

“I thought that was super cool, and ever since then I’ve wanted to be a structural engineer,” Franco said.

While he is not sure of what job he would like to pursue in the Army, he can see himself serving a 20-year career.

“At first I was thinking I would do my first term and be done, but I guess oftentimes people decide they really like it and they want to stay in,” Franco said. “So I’m not sure. Maybe I’ll want to stay in. That’s not an option I would totally kick out of the room.”

Franco is joining two other wrestlers from Clovis Unified School District who are entering military academies: Raymond Lopez and George Ruiz, both from Buchanan High School.

Since Lopez is also headed to West Point, Franco said that it is comforting to have someone joining him who he has known and wrestled with for many years.

“I’m kind of nervous just because I’m moving all the way across the country, and then the first six weeks you can’t have your phone, so I can’t talk to anyone,” Franco said. “At least I’m going to be with my friend Raymond. I’m going to have someone to be there with me. All the people that are going through the same exact thing as me, it will be cool. I feel like I’m going to make a lot of good friends when I’m out there, so at the same time it’s not really that scary.”