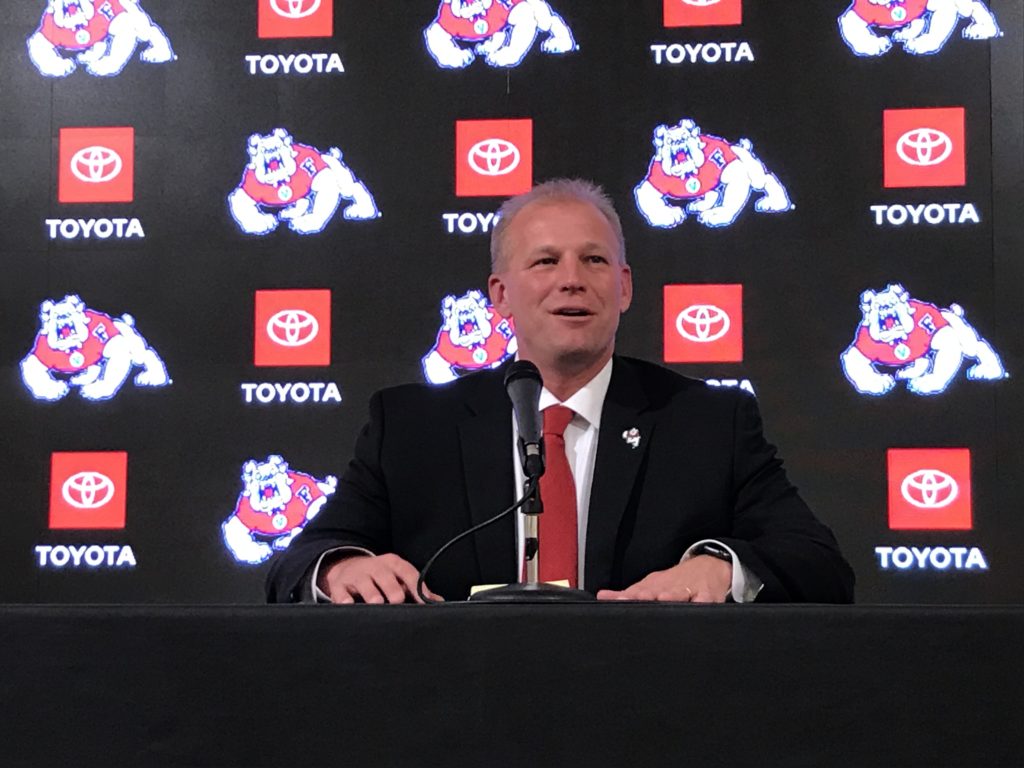 When April rolls around, Fresno State football is usually right in the heart of spring practices – an opportunity for the coaching staff to make early preparations for the upcoming season in the fall.

New head coach Kalen DeBoer, under normal circumstances, would be holding Fresno State’s eighth practice of the spring on Wednesday. But with the coronavirus pandemic sweeping the world, nothing is normal anymore.

The Mountain West suspended all in-person operations indefinitely, and DeBoer and the Bulldogs have moved everything online. Following that trend, DeBoer held a video conference with local reporters on Tuesday and discussed the various challenges of the current situation.

“When we have a chance to get back together is unknown, for sure,” DeBoer said. “We will just adapt to whenever we get the green light. That’s beyond myself. That’s even beyond the university. This is more than football.”

After a year coaching the offense at Indiana, DeBoer returns to Fresno State with his first crack at being a D-1 head coach. And through all of his experience – winning NAIA national championships as the head coach of the University of Sioux Falls, offensive coordinator jobs at Southern Illinois and Eastern Michigan before taking over the Bulldogs’ offense in 2017 – no situation is quite like the one he is currently facing.

DeBoer pointed to 9/11 as another time of uncertainty, but ultimately he said he cannot relate this situation with anything he has ever seen or been a part of before.

The head coach has to deal with all of the uncertainty as he attempts to craft the Bulldogs in his image.

DeBoer is tasked with turning around a team that went 4-8 a year ago. He has a responsibility to every player to get them through this unusual time. He also has to prepare his team schematically and philosophically for the season-opener in September without having a chance yet to test out his players on the practice field.

In theory, one option for the NCAA would be to add on practice time in the summer before fall camp starts, but DeBoer noted that the players could possibly wear themselves out before ever playing in a game.

“There has to be a fine balance between getting what we need to get done and keeping it fresh and peaking at the right time,” DeBoer said. “We haven’t even talked in great detail on what we would do, because we don’t know the timeline of what we’re going to be able to do anyway. I think the unfortunate thing with all of this is we’ve got a lot of staff that really haven’t had a chance to evaluate what our guys look like on the football field.”

And that just might be the greatest challenge facing DeBoer. He is put in a position where he has to choose a starting quarterback without having spring practice and the film of those practices to pour over in the summer. Washington transfer Jake Haener will in all likelihood win the job, but the quarterback currently can’t take the field and wow his new coach.

Haener, along with the rest of the Bulldogs, are at home. So is DeBoer. However, there is a bit of a silver lining in the situation – the coach gets to spend more time with his family. DeBoer said his wife and two daughters moved back from Indiana a couple weeks ago.

“We’ve had a chance to spend more time together, especially since we were away for two and a half months and hadn’t seen each other… That’s happened more frequently than it would’ve happened if we were in full-fledged spring ball,” DeBoer said. So more walks as a family around the community, and things like that. It’s been fun seeing the kids. They’re getting a little bit spoiled on how much they see me, and I get to see them.”

Ultimately, all the responsibilities and challenges that DeBoer is faced with look trivial when compared to what the healthcare workers are currently going through on a daily basis. But DeBoer – as a head coach – impacts, influences and changes lives as the leader of his team.

And in this time of great uncertainty, DeBoer’s No. 1 job is to be a constant for the Bulldogs.

“I think right now the stabilizing idea is just what we’ve already tried to have in place, and that’s to worry about what you can control and do everything you can to make the most of today,” DeBoer said. “That’s really what we’ve talked about since day one. The 1-0 kind of saying, ‘win the day’ type of idea. We’ve been talking about that. If you go 1-0 today, and you go 1-0 tomorrow, you win each day.”