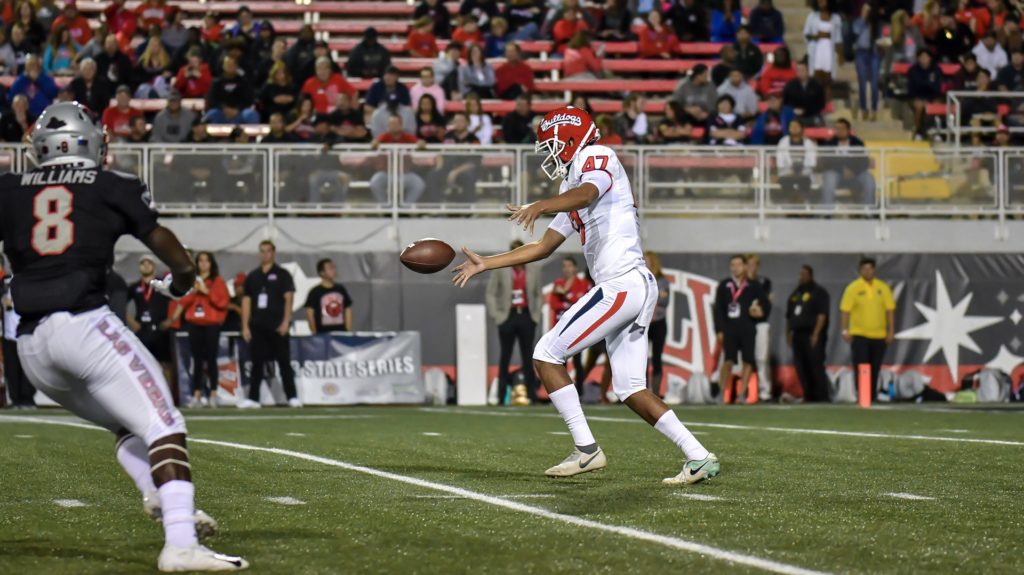 As the season is coming to an end, senior punter Blake Cusick has one more game to show his ability to NFL scouts.

Cusick is following along in the line of recent Fresno State punters who had a shot of going pro – Robert Malone and Garrett Swanson.

He has the stats to back it up too. Cusick is averaging over 44 yards per punt – a career high – which places him at No. 24 in the nation. Cusick’s 41.5 yards per punt career average ranks him third in program history this century, just behind Malone and Swanson.

“I just try to go out there and do my part,” Cusick said. “The whole punt team, they definitely take a lot of pride in every fourth down. They really lay it all out there.”

After the Bulldogs play San Jose State on Saturday and the school semester ends in December, Cusick will return to Southern California to his hometown of Monrovia to train for Fresno State’s pro day, which will likely take place in March.

“Definitely hoping I get a shot somewhere and just take my opportunities, hopefully just roll with it,” Cusick said. “I’m going to go back home and train. My training’s going to start in February, punting wise with my coach. But I’m going to be out there doing my own thing for a little bit before that, just so I’m prepared. Hopefully someone likes me on pro day and just get a chance.”

That will be the next time he performs in Bulldog Stadium since the ‘Dogs wrapped up their home schedule with a loss to Nevada last week on Senior Day.

“I had my mom, my dad and my brother there with me,” Cusick said. “I thought it’d be a little more emotional walking down, but I was more focused on the game a little bit, I guess you could say.”

But now, after giving it a few days and talking with his teammates, Cusick realized that his time as a Bulldog is coming to an end.

Cusick walked onto the Bulldogs in 2015 and redshirted his first year in the program. He earned the starting spot in 2016 and has played in every single game since.

When Jeff Tedford took over as the head coach at Fresno State in 2017, he awarded Cusick with a scholarship in fall camp.

“Felt like a weight was lifted off my shoulders – it was probably one of the top five moments of my life,” Cusick said. It was amazing just knowing that my parents don’t have to worry about me financially as much. They still help out every once in a while, which I’m very thankful for. It was definitely a great feeling.”

Cusick took advantage of the scholarship and graduated with a degree in criminology. He’s currently interning with the Fresno State Police Department where he gets to participate in different training exercises and ride alongs.

If his NFL hopes don’t pan out, Cusick has aspirations to work in law enforcement or the fire department. He said he’s thinking about getting his EMT license and attending the fire academy, but he’ll worry about that once he’s finished with his football career.

“I want to focus on football first and give it my full attention, and after a couple years I’ll probably just – it’s time to give it up – but hopefully that’s not going to happen. I’d definitely love to be playing somewhere on Sundays, Mondays and Thursdays.”

Looking back at his time at Fresno State, Cusick’s favorite moment – like most of his teammates – was winning the Mountain West Championship last season, especially after the Bulldogs struggled early in his career to 3-9 and 1-11 seasons.

“We’ve been through more stuff, and it was just like man, we came so far from where we were,” Cusick said. “It was just insane.”

In regards to a personal moment he’s proud of, Cusick pointed to the win against BYU in 2017 at Bulldog Stadium. He punted four times that game, and his last one was the best.

With about five and a half minutes left in the game the Bulldogs were up 20-13, but they had to punt from their own 31 yard line. Cusick came on and kicked it 64 yards, one of the longest of his career.

“They tried to do a little trick return where their gunner would go back and get the ball, and we downed them inside the five yard line,” Cusick said. “The crowd just went ballistic. That was a great moment. That was a great game.”

BYU fumbled on the following play, and the Bulldogs recovered the ball. Fresno State ran the clock out to seal the win.