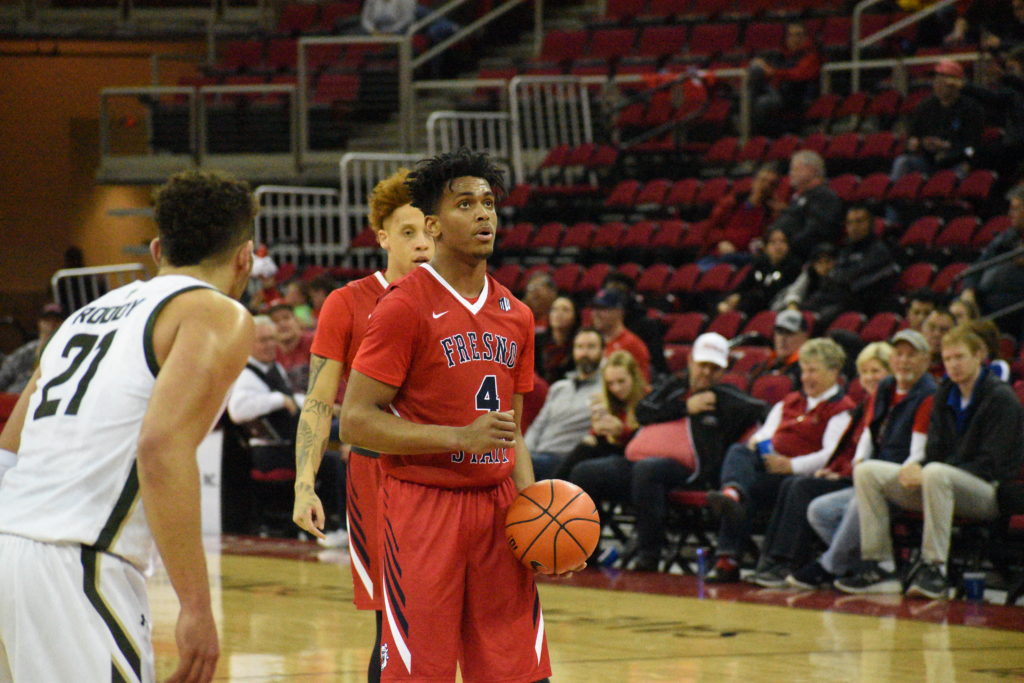 Despite the best performance of Niven Hart’s young career, Fresno State men’s basketball couldn’t pull off the comeback against Colorado State, losing 80-70 Tuesday at the Save Mart Center.

“They’re a good team,” said Fresno State head coach Justin Hutson. “They run that fast break well, and they move the ball to get it inside. But the difference to me from us was our energy and our effort – very inconsistent.”

The Bulldogs struggled to keep up with Colorado State as the Rams jumped out to an early 10-point lead behind strong play from forwards Nico Carvacho and Adam Thistlewood, who combined for 20 points in the first half.

Carvacho continued his dominant performance in the second half, and the Bulldogs had no one to counter his 6-foot-11 frame in the paint. He finished with 17 points and 16 rebounds, although he fouled out with 3:28 left in the game.

Coming out of halftime in a 12-point hole, the Bulldogs’ starters had a breakdown as they let the Rams go on an 8-2 run to start the second half. Hutson said that the group was simply not competitive enough at the time.

“Those guys didn’t deserve to be out on the floor, so I was going to try some other guys,” Hutson said.

He subbed out all five starters just over three minutes into the half and brought in Hart and four others off the bench.

That was the spark that the Bulldogs needed to pull them back into the game, which prevented Colorado State from running away with it.

Led by Hart’s 26 second half points, Fresno State pushed it’s way out of the 18-point deficit to pull within 6 with three minutes remaining.

It was too little too late however. The Rams answered right back with a layup and were sharp on both ends of the court the rest of the way, not giving the Bulldogs anymore room to close the gap.

Hart, a freshman, finished with a career-high 29 points and added four rebounds, three assists, one block and one steal. Hart had previously only scored in double digits twice before: 10 points against Cal State San Bernardino and 16 points against IUPUI.

“He has continued to earn his opportunity,” Hutson said. “And this is something that [he] showed, that we thought he had the talent to score the basketball. There was no question, and he showed his toughness tonight.”

Senior guard New Williams was second on the team with 13 points, 10 of which came in the first half. Senior forward Nate Grimes contributed a double-double – 10 points and 11 rebounds.

Fresno State drops to 8-15 overall and 4-8 in the Mountain West. Meanwhile, the Rams continued their recent run of success with their eighth win in the last nine contests as they compete with Boise State for second place in the conference.

Next up for the Bulldogs is a trip to Las Vegas to face UNLV (11-12) on Saturday.