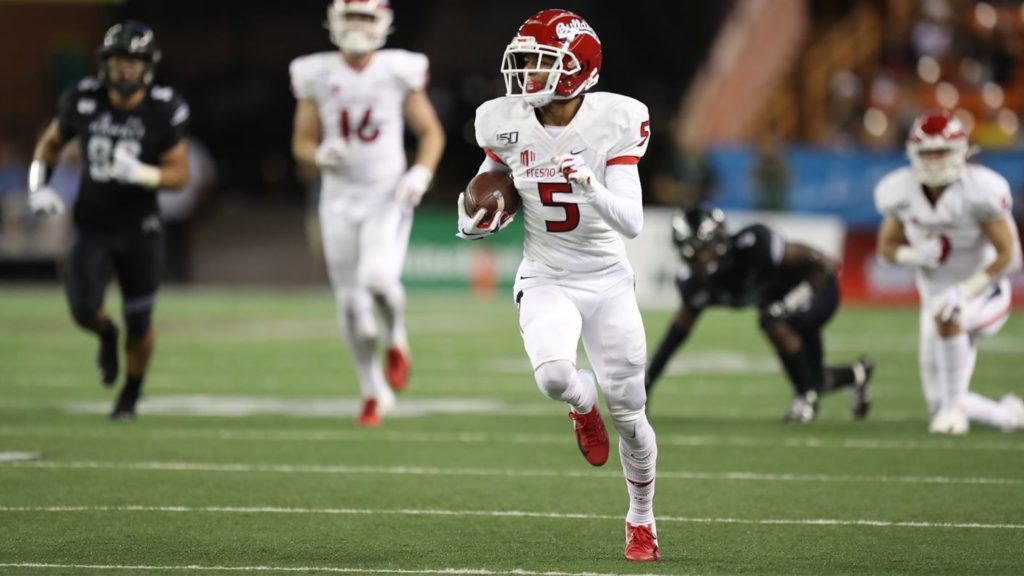 He joined the Bulldogs in 2017 when former head coach Jeff Tedford took charge of Fresno State, and he is also taking on the role of pass game coordinator.

Last year, several receivers contributed and flashed their potential. Zane Pope led the way with 47 receptions and 525 yards and returns for his junior season.

Local players Jalen Cropper and Emoryie Edwards stood out and flashed their potential and return for their sophomore seasons. Keric Wheatfall, Chris Coleman, Jamal Glaspie and Josh Kelly all contributed last year and are back for 2020.

Moore spoke with reporters in a Zoom teleconference on Tuesday and spoke about the upcoming season and the absence of spring football, among other things. Here is what Moore had to say:

On his relationship with head coach Kalen DeBoer:

“Really good relationship with Coach DeBoer. Was fortunate to work with him those first two years, and we did some really good things offensively and as a team. Getting Coach DeBoer back has been awesome. Obviously his time is occupied in different fashions now just being the head coach, so there might not be as many talks about Xs and Os and just offensive stuff. But he’s honestly been a huge mentor to me through my time here at Fresno State.

On his role as pass game coordinator:

“I’m fortunate that Kalen has the confidence in me to give me that title. Just from a game planning perspective, I think just all facets of the pass game – first, second down, third down, red zone, all those situations. Just making sure the play is dialed.

On Cropper’s contribution last year and what he expects moving forward:

“Last year that was a testament to him and his work ethic. I don’t necessarily believe Jalen – we do have specific X Z and H positions at the receiver spot, but Jalen, we tried to move him around. Obviously he’s a playmaker, so we tried to find different ways to get him the football, different positions and get him in space. As the season progressed, he improved as a route runner, and that’s really him and his work ethic. So we’re really excited to where he’s going.”

“He is a very reliable player on the field, and dependable and is going to be in the right place at the right time. For a quarterback and for an offensive staff, that stuff is invaluable. So he had a ton of big catches on third down, in the red zone, and I think his confidence continued to progress as the season went on.

On the quarterback competition between Jake Haener and Ben Wooldridge:

“I think that’s going to play itself out over time. I think as receiver coach, and the guys in the room, we need to control what we can. And that is our job and our responsibility, and focusing on that one play at a time and improving as we start this season. That stuff will play itself out. That’s out of our control at the receiver spot.

On his relationship with his brother Kellen Moore, the offensive coordinator for the Dallas Cowboys:

“That stuff’s invaluable. That’s our family, football, that goes without saying. Dad and his coaching experience, and then Kellen and where he’s at now. Very fortunate that they actually start their training camp in Oxnard, so a lot of times I’ll go down there for three, five days, maybe a week – depending on when we start. And it kinds of gets my feet wet, gets my brain processed in some different things, maybe pick up a drill. Just around obviously the elite of the elite in the NFL. Talking to Kellen about football all the time is awesome, and being able to pick his brain about different things and things they’re doing and how he thinks it would work in a college game.”

On the receiver group as a whole:

“I think the whole receiver room, not just Emoryie and Jalen, but all those guys I think had a really good offseason to the point we were at. So I’m really excited just to get – I want as many guys to play as possible. I think that helps out the room. We’re getting a lot of different guys involved, I think it makes it really hard on the defense. And when guys can understand the big picture, we can move them around and play them at different spots. And that makes our offense more explosive and just hard to defend.”

On the quarterback-receiver connection without having spring football:

“I think for the receivers, the guys in the room, obviously there’s a certain aspect of timing with the pass game. And so with repetition that will definitely help as we get started into the season.”

On how he is doing during the COVID-19 pandemic:

“It’s a unique time, and just like our guys and the things we’re saying to them, we’re trying to control the controllables. So I’m at home right now and trying to find the positives. I have an 11 month old daughter here at home, so that’s been awesome to be around a lot more and help out. And at the same time get the work done and the recruiting, that’s never going to stop. There’s a lot of opportunities for football development right now, whether you’re listening to someone speak online, through Zoom, talking to different coaches and getting new ideas. I think just trying to find the good in everything, and everyone’s in this together for a common cause.”

On the competition in the wide receivers room:

“I’m really excited about the competition, and I think that makes everyone better. Guys definitely made plays throughout last season. Obviously we’re always trying to build on being more consistent, and that is a huge emphasis. One play doesn’t carry over to the next play, and we have to reset, whether it was a good play or a bad play. Reset and attack the next play.”

On Wheatfall, his injuries last season and what to expect next season:

On Mac Dalena joining the ‘Dogs in the fall from San Joaquin Memorial High School:

“Mac is a Bulldog football junkie, player, he’s everything we want in a receiver here. Just really excited – you watch his high school highlight tape, and whether it’s offense or defense, that guy is making plays all over the field, playing with great effort. So really excited to get him going this fall.”

On Chris Coleman returning to receiver after switching to cornerback midway through last season:

“Chris is very explosive, whether he’s on offense, defense or special teams. Brings a lot of value whether he’s going up high-pointing a ball, or catching it within five yards and then getting a lot of yards after catch. So I think Chris still had a pretty good understanding of what we were trying to get accomplished offensively. Obviously there’s an aspect of he needs repetition. So that’s going to come here with time.”

On having more former Broncos than Bulldogs on the staff:

“We’re all in this together.”

On his conversation with DeBoer when the head coach was hired:

“It was a quick conversation. Obviously very fortunate and excited once I talked to Kalen and the guys in the receiver room. And obviously working with Coach DeBoer, very fired up to work with him. I feel like we’re in a good place right now.”

On finding consistency with a deep group of receivers:

“I think that’s always what you’re juggling, is getting – we probably played six to seven guys last year in each game. So you’re trying to put guys in the best position to be successful, and at the same time you’re not – you could have 55 plays in a game, you could have 75, you could have 80. You want to get guys into a rhythm and move guys around, put them at X, Z and H. I think that is something that’s still going to come up this fall, or whenever we get back going. There’s going to be a lot of competition, and I’m really excited about it and trying to get the best guys on the field.”

On the tight end group and its role in DeBoer’s offense:

“I think with all positions, especially in the pass game, you want to make sure that everyone’s on the same page and everyone is using the same coaching points and buzz words. When everyone’s speaking the same language, I really think that helps the guys on the field and helps them play fast. And they can really hear something and know whether they’re doing something really well or they need to correct something. I think Kalen’s done a tremendous job, you could say receivers, running backs, tight ends and obviously the quarterbacks have played at a high level everywhere he’s been. He’s been a winner.”

On if he’s concerned that there might not be a football season in 2020 due to coronavirus:

“It’s out of my control. Just trying to focus on the task at hand, and I know tomorrow I’ve got a staff meeting at 1 – and find out what we’re doing for the next day.”