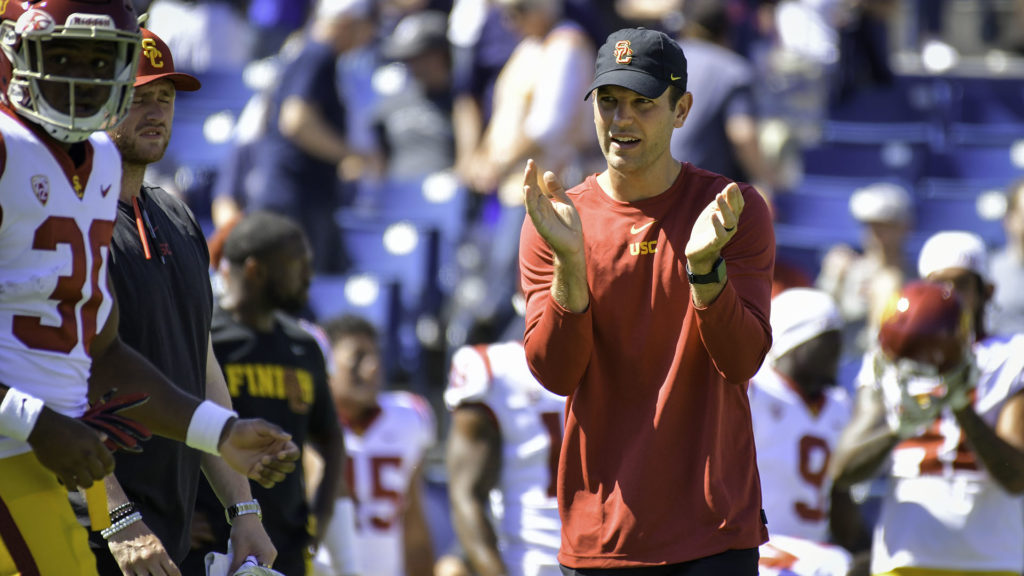 Indiana offensive coordinator Kalen DeBoer likely sits atop the list. Considering the fact that he coached at Fresno State from 2017-2018 and that Tedford will play a part in selecting the next coach, it feels like it’s DeBoer’s job to lose.

But what if Tumey can’t bring DeBoer back? What if those negotiations break down?

Sure, Tumey could go to Plan B, which includes plenty of experienced candidates who have extensive coaching histories and ties to the university.

Instead of that, though, Fresno State should look to go very young – someone in their 30s.

Bring in a young coach who will energize the program like no one has before. Find the next young offensive genius that the rest of the country will be in awe of. Find the next Lincoln Riley, the next Kyle Shanahan, the next Sean McVay.

Would these coaches use Fresno State as a stepping stone to a bigger job? Yes, of course, but that’s not a bad thing. That means that Fresno State would win a whole lot of games while they were roaming the sidelines at Bulldog Stadium.

For example, P.J. Fleck and Mike Norvell are a couple coaches who used other mid-major programs as a stepping stone, and it worked out very well for their respective schools.

Fleck took over Western Michigan in 2013 when he was 33. There first year was rough (1-11), but by 2016 he transformed the program into a 13-1 team that played in the Cotton Bowl before moving to Minnesota the following season.

Norvell took over Memphis in 2016 at 35 and went 38-15 in four seasons, including 12-1 in 2019 and an appearance in the Cotton Bowl. Florida State introduced Norvell as its new head coach last Sunday.

It hurts to lose these coaches after just a few years, but they both succeeded in taking their schools to a New Year’s Six Bowl, something Fresno State has fallen short of.

If Fresno State decides to take a chance and go young, here are the coaches Tumey should have on his shortlist:

Bulldogs fans should remember Moore as one of the best collegiate quarterbacks of all time at Boise State. It would be ironic for him to be a Bulldog after being Fresno State’s nemesis, but he deserves a shot to escape the incompetence that is the Dallas Cowboys.

The current Cowboys offensive coordinator has performed a miracle and turned Dak Prescott into the NFL’s leading passer. He also has Dallas leading the league in total offense.

Moore has already proven to be a bright, young offensive mind in his first year as offensive coordinator. He looks destined for a head coaching gig sooner rather than later.

Given his experience playing under Chris Petersen in Boise, Moore should be able to move into a collegiate head coaching position without any issues.

Fresno State already has a Moore on staff, Kellen’s brother Kirby, the wide receivers coach. He joined Fresno State in 2017 after serving as a grad assistant at Washington for two seasons.

KeeSean Johnson’s production improved each year under Moore as made his mark as one of the best receivers in program history.

Moore has also been one of the best recruiters in California. He secured commitments from the young receivers on the team, including Jalen Cropper and Emoryie Edwards.

Moore isn’t even 30 yet, so he’s very young, but seeing how productive the wide receivers have been, he’ll earn his shot as an offensive coordinator eventually.

Because of his age and lack of experience, he obviously won’t even be considered for the job. But don’t be surprised when he eventually gets his chance to lead a program and is one of the hottest commodities on the market.

The current USC offensive coordinator should be a candidate anyways, but he checks all the boxes of being a young coach who has produced a top offense.

Harrell had to deal with losing starting quarterback J.T. Daniels against Fresno State. He plugged true freshman Kedon Slovis in and didn’t miss a beat.

Trojans’ head coach Clay Helton would likely have been fired if Harrell didn’t come in and produce a top-20 offense.

At 34, Harrell feels like a coach capable of stepping in like Riley did at Oklahoma and achieving instant success with a high-flying offense.

Brady is the man behind Joe Burrow’s sudden rise as the best quarterback in the country. He is in his first season at LSU as the wide receivers coach and passing game coordinator. Without him, LSU doesn’t doesn’t have the No. 1 offense in the nation.

The 30-year-old will garner interest as a coordinator in the offseason, but after revamping LSU’s offense, he – along with Harrell – looks like he’ll be the next great college football coach.

He doesn’t have any connection to Fresno State, but that’s no excuse to ignore his potential.

Popovich doesn’t quite fit the archetype of an offensive “genius,” but he should be ready to take the leap from NFL assistant to college head coach.

Fresno State fans will remember Popovich from his playing days at Fresno State. He started at left guard from 2004-2007 and was one of the best linemen to play for Pat Hill.

Since graduating from Fresno State, he jumped around as an assistant at a few different colleges, including Fresno City from 2012-2013. In 2016 he joined the New England Patriots and Bill Belichick as a general assistant, and he was promoted to assistant running backs coach in 2019.

Fleck made the jump from an NFL position coach to a college head coach. Given Popovich’s experience learning under Belichick, he’d be as sure of a bet as anyone to be able to make that transition.