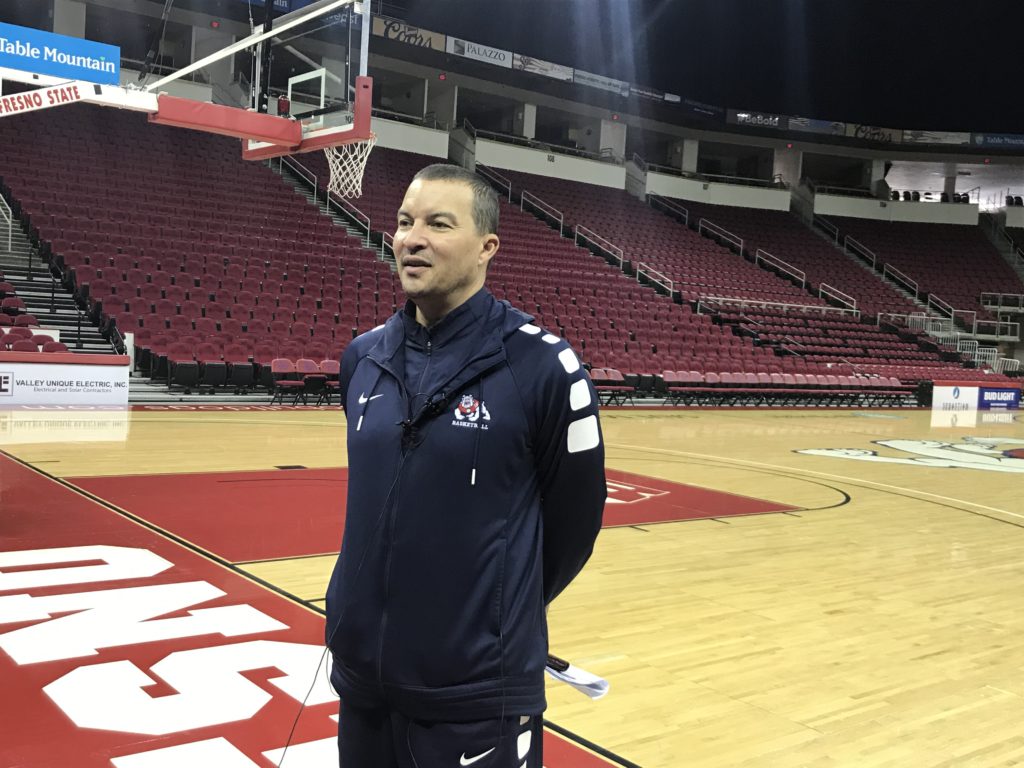 The Bulldogs are gearing up for the last three nonconference games – all at home – after a road trip that saw two close losses and a blowout win at Cal Poly.

Head coach Justin Hutson spoke with the media on Thursday and said the practice schedule won’t change much with the Christmas and New Years holidays, but the players are given a couple days off.

“They get a day or so to go home, which is nice because you don’t always get that,” Hutson said. “And the ones that are left here – going too far, don’t have the money – they’ll be welcome to come by my house. And we can sit and watch football and have a good time, and we won’t talk a lot of basketball. I won’t be putting on basketball film during that day.”

Even though the ‘Dogs’ record places them near the bottom of the conference, the record could easily be reversed.

“It’s about figuring out what we did well in those games and what we didn’t, and getting back to practice and trying to keep a great attitude and get better,” Hutson said. “But it’s where we’re at. We’ve had a lot of injuries. We’re really young. So it’s just kind of the reality of where we’re at.”

Guard New Williams missed some time this season with a recurring back injury, but he had a career-high 26 points in the overtime loss at Utah State and looks to be fully healthy.

Fellow senior Noah Blackwell wasn’t so fortunate. He suffered a knee injury in the Utah State game. Hutson said the initial prognosis for Blackwell was a 4-6 week absence, but he’s not sure if that’s accurate anymore.

“Hopefully it’s not a year ending injury, but it is serious,” Hutson said.

In Blackwell’s absence, Hutson is looking for the other seniors, like Williams and forward Nate Grimes, to step up and lead a turnaround.

“Well you want your seniors to lead,” Hutson said. “That’s what you want. We have some good freshmen that are out there playing, doing the best they can. They’re up and down like most freshmen are, you want your seniors to lead. And we’ve got to get them on the floor first before they lead. I’m glad we got New back. Nate’s getting better and better, and now we’ve got to get Noah healthy.”

Freshman forward Orlando Robinson stepped up recently, especially in the win against Cal Poly when he pulled down a team-high 15 rebounds.

“Orlando’s getting better,” Hutson said. “He’s getting better. He really is. He’s playing a little bit more inside, playing to his strengths. He’s still shooting an occasional three-pointer, and he’s working on that. And he’s getting better defensively. He has no fear in him, and we love that about him. We want him to stay aggressive, and he’s going to be a heck of a player if he keeps that work ethic.”

Here’s more of what Hutson had to say:

On how it feels to come back home after the recent stretch of road games:

“It’s nice to be home. The guys are in finals working their tails off, so we were able to practice. Now we’ve a couple home games to get back in front of our Fresno crowd.”

On the young team and trying to win these last nonconference games:

“Wins always help. There’s no question. Our job is to get better and try to be really good by the time we get to February, get healthy. Noah and Jared have been out for a while, which hurts. Wins always help. They always make you a little bit more confident, and a lot of time they create even more buy in.”

On teaching the resilience to the players with all the close losses:

“Talk to them as a group, watch film. Don’t just show them all bad stuff, show them some things that are good. Learn from the things we can do better, whether it’s at the end of the game or whether it’s losing the lead that we had during the course of the game. It’s not always talking about the end. Individual meetings with the guys making sure everybody’s fine and coming back and getting to work. There’s no magic potion.”

On Grimes and Williams building on recent success:

“Nate is getting better and better and better. Not only is he scoring the ball better, he’s rebounding like he always has. He’s becoming a better all around player, and he’s leading by example a little bit more. So we’re trying to keep him going in the right direction in that facet. And with New, we’re just happy he’s back. He had that back injury, and I don’t know how many games he missed, but he was out for a significant stretch. And it’s hard to get into a rhythm when you’re in and out. He’s always been – not penciled in – but in sharpie that he was going to be one of our leaders. And he’s doing that now.”