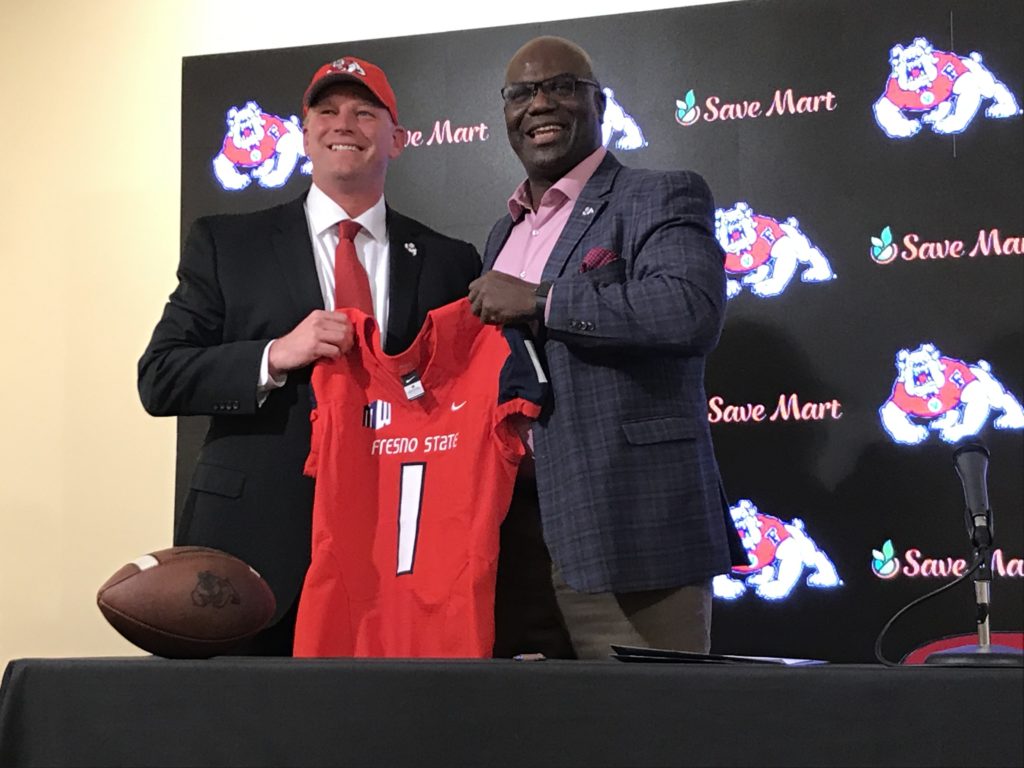 Athletic director Terry Tumey introduced DeBoer at a press conference at the Save Mart Center. He called DeBoer a proven winner, a champion, someone who understands player development and a man of high integrity and character.

“The person that we were looking for was somewhat special, almost like a unicorn,” Tumey said. “You don’t find these people all the time. We needed a person who had, of course, unparalleled success as a head coach, and I think we found that person.”

DeBoer has a history of leaving every program he’s been a part of in a better place than when he arrived, Tumey said, which was a key characteristic to look for in a head coach.

Former head coach Jeff Tedford stepped down on Dec. 6 due to his health, and now DeBoer returns to take the reins and continue what Tedford started.

“There’s a great foundation here,” DeBoer said. “There’s no doubt in my mind we’re right where we want to be as far as what Jeff Tedford’s instilled in this program. I also am excited about the continuity that exists and us quickly taking this thing to even greater heights. I know 12-2 is the best that it’s ever been, and that just happened a year ago. That’s my expectation – not shy to put it out there. We’re going to win football games here. We are going to do it the right way. We’re going to do it with integrity.”

DeBoer said he met with the team earlier on Tuesday and burst into excitement when he saw players that he coached and recruited.

“I just shared with them that my goal as their head football coach is to make playing football at Fresno State one of the most exciting times of their personal life,” DeBoer said. “And I’ll put everything into them to make sure that that happens.”

DeBoer then departed for Indiana, where he spent one season and oversaw an offense that led the Hoosiers to an 8-4 record, their best finish in 26 years.

This will be DeBoer’s first action as a head coach at the Division 1 level. He previously served as the head coach of NAIA school Sioux Falls from 2005-2009, where he went 67-3 and won three national championships.

“I don’t care if you’re playing at a sandlot or coaching at the highest level of football, when you’re a head coach and you can finish 67-3 as a head coach, that is an amazing statistic,” Tumey said. “So it doesn’t matter what level that’s in. That’s an amazing feat.”

The coaching staff should mostly stay the same. DeBoer said he will individually meet with each assistant coach, but he mentioned that the continuity of the staff will help with recruiting and the transition from Tedford to himself.

“I can’t wait to continue to work with the staff as we reach our goal of winning a Mountain West Championship and get back to what Bulldog football is all about,” DeBoer said.

When Tedford resigned, Tumey addressed the 14-day hiring period for state schools, saying that the university had no intention of evading the legislative efforts of California. However, during the search for a new head coach, Tumey found that the 14-day waiting period was only a suggestion and not an actual rule.

“We did a little bit more due diligence in terms of what our standards and procedures are from the CSU system, and what we found is that was a recommendation, not a hard and fast rule,” Tumey said. “The most important thing of course is [to] have equity in your search and do it the right way from a compliance perspective of the state of California. Luckily, in our case, because of that we were able to comply in the right way.”

Tumey said that there was an immense amount of interest in the position that included coaches from all levels of football – former and current NFL assistant coaches, college head coaches and college assistant coaches.

“It literally ran the gamut – many notable individuals,” Tumey said. “But the key though is rather than looking at all those array of characteristics, is the fact that you have to look at how they would fit in this moment, in this community, with these student athletes at our university and really have the same values of our community as we do. So that narrowed the focus fairly quickly when you start taking all those pieces, because you’re not going to compromise any of those characteristics in order to find the right person.”

DeBoer follows in a line of successful head coaches, Tumey said, comparing him to Jim Sweeney, Pat Hill and Tedford and said that all four coach the right way that Fresno expects.