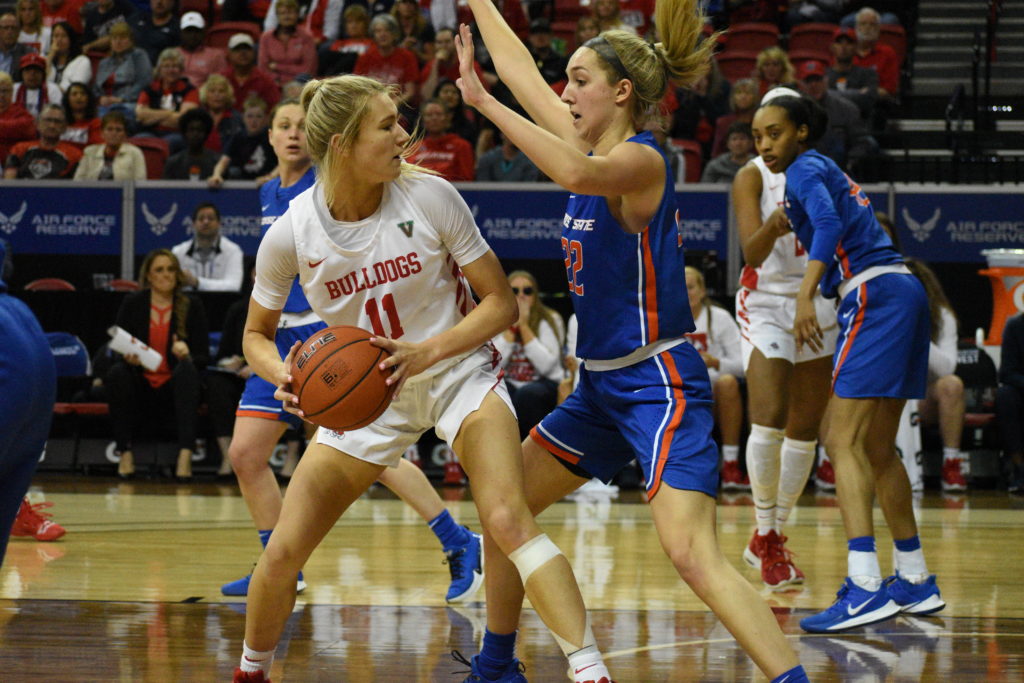 After a hard-fought, close game, the Fresno State women’s basketball team fell in overtime of the Mountain West championship game to Boise State 80-76 in controversial and heartbreaking fashion.

“Not our best game,” said head coach Jaime White. “I thought we kind of hung in there, and we made a run in the first half and got that score where we wanted it to. And at the end of regulation, I thought we had some opportunities to knock it down… Every night you’re not always in control of some things, and I thought our kids battled, and they did what they had to to make that game winnable.”

The Bulldogs were down 78-75 (check) with four seconds left. Freshman guard Haley Cavinder was at the free throw line and made the first shot. She missed the second shot with the hope that one of her teammates would grab the rebound.

After a scuffle for the ball, junior guard Aly Gamez came down with it with 1 second remaining and put the ball back up for the game-tying shot.

Gamez made it, but referee Lisa Jones blew her whistle and called the shot off, saying that someone on Fresno State called a timeout while Gamez was going up for the shot. It looked like Gamez was fouled and also stepped out of bounds in the same sequence, but the officials stuck with the timeout call.

Unfortunately for the Bulldogs, they had already used up all of their timeouts, so the officials gave Fresno State a technical foul, which put the Broncos on the line and gave them possession.

White said that she did not know who called the timeout.

“I think we made a great play at the end,” White said. “Hey, we made the first one. We missed the second one. We got the rebound. So we did everything we could do in our power, and then I guess you saw it. It was on national TV, wasn’t it?”

White added, “I still don’t understand it. It’s really hard when there’s a lot of emotions going on.”

Jones released an explanation through the Mountain West after the game.

It read: “After making sure Fresno State recovered the ball without going out of bounds, I acknowledged the audible timeout that was requested by a player on the court. Fresno State was out of timeouts, so the excessive timeout came into play. When an excessive timeout is accessed, it is the only administrative rule where the team loses possession after two free throws by the opposing team. Play resumes at the point of interruption.

Ultimately, Fresno State should not have even been at that point. The Bulldogs should have closed it out in regulation. They entered the fourth quarter down by 6 and caught fire, making their first seven shots.

But then they missed the next seven and found themselves down by three with 13 seconds left. Cavinder came up and hit a three to tie it up at 71 all. The Bulldogs then forced a stop at defense to send the game to overtime.

Their cold streak continued into overtime, and the Broncos managed to build a lead and hold it when the controversy ensued.

Fresno State found success in the paint all night, holding a 40-20 advantage over the Broncos. Forward Maddi Utti was her typical, consistent self near the hoop, but unfortunately for the ‘Dogs, she didn’t have one attempt from the field in overtime.

“We knew that we could catch up,” Utti said. “We were coming from behind. We’ve done it before against Boise, so we knew we could catch up. So we were pretty positive going into the third and the fourth quarter. And then Haley hit that big three, and at that point we thought we had it.

“But then overtime happened, and yeah, you guys saw it. It just didn’t turn out the way we wanted it to necessarily. But I think we just kept fighting, and that shows a lot about our team.”

Utti, Haley Cavinder and Hanna Cavinder played all 45 minutes. Utti finished with 16 points, and the twins each scored 17 apiece.

Guard Aly Gamez was the best all-around player for the Bulldogs. She scored 17 points and went to the free-throw line time after time, making 9 of 11 attempts. Gamez led the ‘Dogs with 9 rebounds and 4 assists.

This is Boise State’s fourth Mountain West championship victory in a row, and the Broncos earn the conference’s automatic bid to the NCAA Tournament.

Fresno State finishes the season 25-7 and will have to wait and see if an unlikely at-large selection is in store for the NCAA Tournament. If not, the WNIT could come calling.