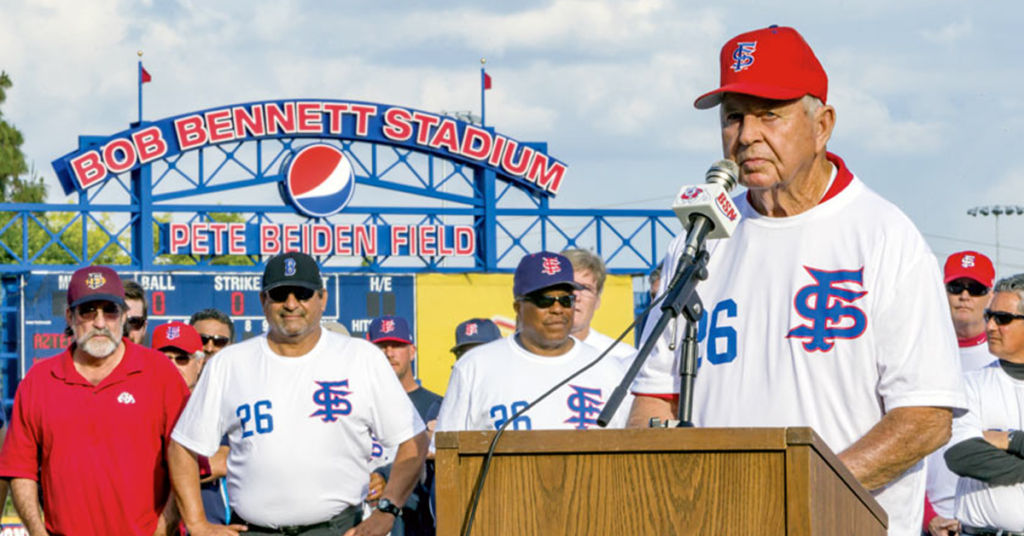 With a 1,302-759-4 career record over 34 seasons with Fresno State, Bennett was the winningest coach in program history.

Bennett first coached the Bulldogs in 1967, filling in for former coach Pete Beiden for one season. He returned to coach Fresno State full time from 1970-2002.

The Diamond ‘Dogs won 17 conference championships under Bennett, had 21 NCAA Tournaments and made it to the College World Series twice.

Current head baseball coach Mike Batesole said on Twitter, “Prayers to the Bennett family from ours. RIP the greatest coach our valley will ever see, your name on our stadium says it all.”

On May 20, Bennett’s son Todd Bennett posted an update on Facebook about his father, saying Bennett’s heart stopped following a procedure. He was placed on a ventilator and was unconscious.

On Sunday, Todd Bennett posted an update about his father’s passing, “My dad passed away this morning at 4:17. My mom, sister, brother, brother-in-law and four of his eight grandchildren were able to be by his side. Thank you all for your prayers and support. Thanks especially to those who sent him videos telling him the impact he made in their lives. We were able [to] share several with him on Friday.”

In a statement, Fresno Mayor Lee Brand mourned the loss of a Valley athletics giant.

“The Central Valley has lost another legend and college baseball has lost a visionary,” Brand said in a statement. “His impact on the Fresno State program and indeed, on our university, can be measured not just in wins and championships, but in the people he touched by showing them the value of loyalty, respect and humility. “

Bennett coached at Kingsburg High School and Bullard High School in Fresno before he took over at Fresno State.

In 1988, he was named the NCAA Coach of the Year by The Sporting News.

Over 100 of Bennett’s players were selected in the MLB Draft, and 35 of them made it to the majors.