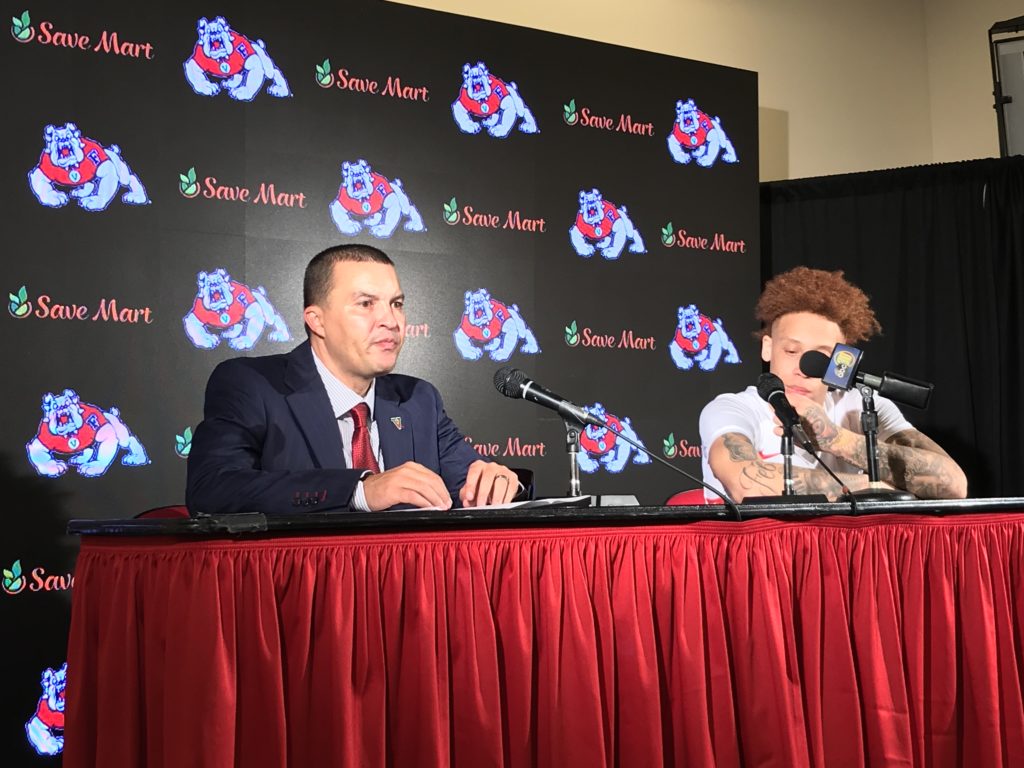 It went to double-overtime in Fresno State’s Mountain West opener, but the ‘Dogs couldn’t prevail against UNLV, losing 81-80.

It was as thrilling and as tightly contested of a game as the Bulldogs will see all season. There were 13 lead changes, and the score was tied 12 times.

“Saw some good things, saw some bad things,” said head coach Justin Hutson. “Didn’t make the plays at the end that we needed to make, especially on the defensive end.”

The Bulldogs should have won in regulation. They were leading 65-60 with 1:20 left, but UNLV was relentless on the offensive glass and capitalized on the ‘Dogs’ missteps – a turnover and a missed three-point attempt – to tie the game up and force overtime.

The first overtime was just as close as regulation. The Bulldogs held a 72-71 lead within a minute to go, but UNLV drew a foul and made one of the two attempts to tie the game with 10 seconds left. Fresno State had a chance to attempt a game-winning shot, but guard Noah Blackwell threw an errant pass intended for guard New Williams, which led to a turnover.

“I saw he was wide open, and it just slipped out of my hand when I passed it,” Blackwell said. “I shouldn’t have passed it though – stupid turnover.”

UNLV went up early in double-overtime with a three, and the Rebels led the rest of the way. Fresno State pulled within three with 19 seconds remaining, and the ‘Dogs immediately forced a turnover to have shot at tying the game.

It didn’t go in the Bulldogs favor, however, as they missed a game-tying three with a couple seconds left. Forward Nate Grimes grabbed the rebound and got a quick putback to pull the game within one, but time ran out after UNLV inbounded the ball.

After a slow offensive start, the Bulldogs hit four straight threes near the end of the first half to take a 12-point lead. The Rebels were able to cut the deficit after that, and outside of that series, the game was within six points all night.

Fresno State struggled on the glass, especially on the defensive end. The Rebels pulled down 18 offensive rebounds and led 51-36 in total rebounding.

“Every message at the timeout was, ‘Box out and hit your guy,’” Hutson said. “An ironic part, a lot of it, it didn’t matter if it was the big lineup early – was giving up offensive rebounds. We had the big lineup early that gave up one on a free throw. Or you had the little lineup in who was giving up offensive rebounds, and some of them were coming from wings.

“It wasn’t like it was necessarily two big guys sitting at the basket that were killing them. They were running in and rebounding. That’s something that we work on every other day. We don’t work on rebounding every day, but we do work on running and rebounds and interior boxouts, and every timeout it was obvious from the first tip that they were going to the boards hard. We just couldn’t get it done.”

Blackwell led Fresno State with 18 points, and guard Mustafa Lawrence was right behind him with 16. Both of them were especially effective from beyond the arc – Blackwell went 4-7 and Lawrence went 4-8.

For as good as the Bulldogs were at the free throw line in regulation (16-20), it didn’t carry over into overtime as they only made half of their attempts (4-8).

Grimes led the ‘Dogs on the defensive end with 3 blocks, although they all came in the first half. He was also the only Bulldog to have success on rebounds, pulling down 12.

Forward Orlando Robinson had 12 points and 5 rebounds, and he took over the game at times on the offensive end, often times shaking off multiple defenders to work his way to the hoop.

Freshman guard Jarred Hyder – Fresno State’s leading scorer coming into the game – struggled to make an impact on the ball. Although he played 32 minutes, he only managed to score 4 points on 2-6 shooting, including 0-3 from three-point range.

Fresno State drops to 2-5 (0-1 MW) and has another conference game up next at Utah State on Saturday.