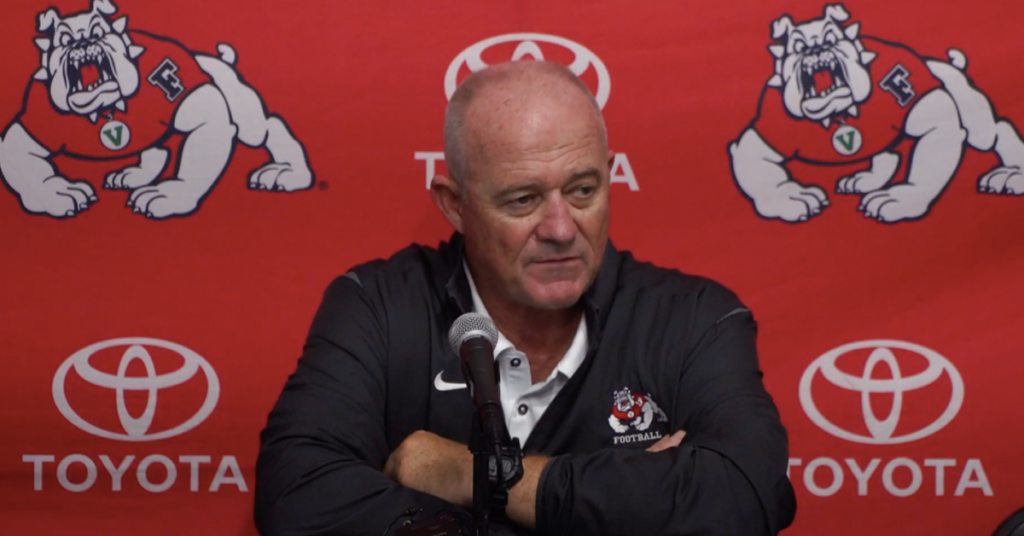 Coming off the 31-23 loss to USC, Fresno State football is gearing up for its home opener against Big 10 opponent Minnesota.

Head coach Jeff Tedford held his weekly press conference Monday. Just like he did after the game Saturday, he said the loss serves as a learning experience for the Bulldogs, especially for the players who made their debuts.

Tedford noted the missed tackles, poor kickoff coverage and the two turnovers in the red zone, but he said it wasn’t all bad.

“Don’t get me wrong, there were a lot of positives in the game,” Tedford said. “We’re not pressing the panic button by any means, because there were some good things that happened in the game.”

Although quarterback Jorge Reyna had an up and down performance against USC, Tedford said he competed very well and tough, and he will grow from the experience.

“He took some shots and made some plays with his legs, both on designed runs and pulling it down and scrambling,” Tedford said. “I thought there was a lot to build on there. I think Jorge proved how tough he is and how competitive he is.”

Looking ahead to Minnesota, Tedford said the Bulldogs are going back to work with a bad taste in their mouths and will get the chance to play a tough game against a quality and physical opponent.

“They did a great job against us last year,” Tedford said. “We have our hands full. I know it’s going to be competitive and a very physical football game. We’re going to have to play our best.”

On how the young players played against USC:

“Maybe in the beginning they were a little bit too hyped. We didn’t tackle as well as we normally do. Those are some of the things that you worry about going into the first game because you don’t get a lot of live tackling trying to stay healthy. And then trying to tackle those types of guys in space. I thought the young guys played hard. They just tried to do their job. But there’s some feel things, some little details that we can clean up. But it’s a good experience for those guys to go play a group like that.”

“Little bit different. I think the guy last year at points put the ball down the field a little bit more, but they’re very similar. They run their offense. They do what they do. They’re going to lead with the run with that big offensive line. Their massive offensive line – everybody’s over 300 pounds. They have 400 pound tackle. They’re built for Big 10 football. We’ll try to stop the run and try to get them into long yard situations, because that’s what they did really well against us last year.”

On how the offensive line played against USC:

“I thought for the most part, with three new guys playing in there, that for the most part did a decent job. But there’s some things for sure that we can improve on. We’re going to have our hands full again this week. The goal is [to] try to get better every day and every week. So take that experience and build on it. Like I told the team, any player, you go through a play and maybe it doesn’t go right or you don’t execute well. ‘What would I do differently next time?’ So with each rep you have that opportunity to learn and hopefully be better next time.

On improving from Week 1 to Week 2:

“I think it’s just the game. You go through and practice is practice, and games are a little different. You get used to what goes on in the game. There’s some things in the first game that you obviously can’t prepare for at practice. You do your best to do it, but the speed at which it happens against different players and a different team especially like USC [who] is very talented. It’s about playing the game, which you don’t have an opportunity to do. You don’t get a chance to live tackle very often. At least late in camp you try to stay healthy. Which is for everybody, it’s not just for the guys that are tackling, but the guys getting tackled as well. We put a couple balls on the ground. Jorge got hit pretty hard on that one, but you don’t run around and hit your quarterback during practice. As much drill work we do to try and prepare for that, games are just different.

On coming close against USC:

“Last week we went there to win the game and we didn’t get it done. It’s plain and simple. Competed well, but that’s not what we went there to do. We know we’ve got to play better in a certain situation and give up a kickoff return, 100 yard kickoff return and two turnovers in the redzone. And we have to tackle better. There’s a lot of things we can improve on. We just take one play at a time. And that’s the thing. If we take care of the little things, the big things will take care of themselves. So we’ve just got to take one play at a time and continue to improve and execute in all phases of the game: offense, defense and special teams.”

“He made two great catches down the stretch. Those were tough plays. He had to lay out – go back for one. Jorge did a great job in keeping it alive and putting it in a spot. He made a great play. His touchdown catch of catching it and getting the ball in the endzone without putting his knee down – that was an impressive play as well.”

On what it means to him to coach in Bulldog Stadium:

“It’s always special. I’ve been up and down that ramp a lot of times, both as a player and a coach. It’s nice to be home. Always enjoy playing in front of our fans. When Bulldog Stadium gets going, it definitely is an advantage for us. So I hope they come out Saturday night and help us – that energy for us and make it difficult on the opponent. Hopefully everyone comes out. The players are excited to play at home. We have a new field, which is really really nice and has played really well. Going up and down that ramp, it’s pretty cool. I’ve done it a lot of times. It never gets old.”

On what he learned about this particular team seeing them for the first time:

“That they will compete, and they’re going to do it together. When you lose 30 players on a team, one of the things is how they come together as a group. I thought this team in preparation at the hotel and focus was really good. I thought that togetherness was definitely there. The guys will compete, and they’ll play together. That’s what’s important. I think the older guys have done a nice job of providing some leadership, some cohesiveness for the group. I didn’t think it was too big for any of them. I was pleased with the preparation and the mindset going into the game.”

On having left guard Netane Muti back after missing most of last season due to injury:

“It’s big. He’s one of our captains. He’s one of our leaders. He brings a great presence with him, not just on the football field, but in the meeting room and the weight room, all around. I think Netane has really grown into that role. He used to be a little bit giddy and happy-go-lucky. I noticed a difference in him. He’s very serious about what goes on. He wants to hold his teammates accountable. And he has a great deal of respect from his teammates. It’s nice to have him back.”

On his message to the team this week:

“Just prepare one day at a time. Get better every single play. Focus on the game plan. Take care of your bodies. It’s always the same. It’s not different any week. Every week is the same. We need to approach every week the same. We can’t be on a roller coaster and do anything different this week because of who we’re playing or what happened last week or anything like that. It’s just stay consistent, have a standard, have an expectation, hold each other accountable, work hard, make sure we know our opponent. Preparation’s the key. Take care of the details. That’s how we’ll approach the week, just like always.”