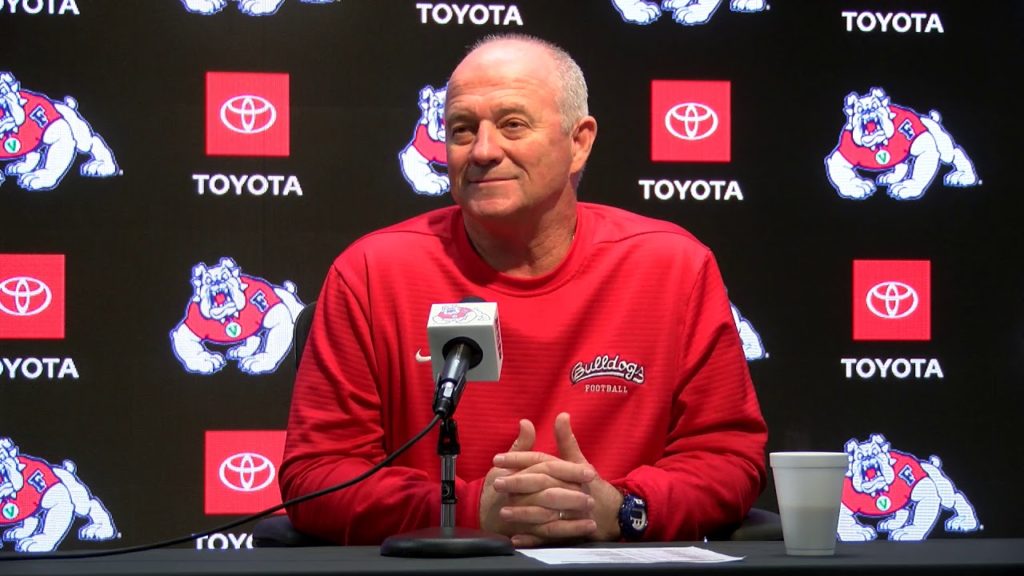 Now in his first game week of the season, Tedford said Monday felt different when compared with the last three weeks of practice, which were repetitive. The players had Monday off and will resume practice Tuesday.

News and notes from Monday

USC head coach Clay Helton announced Sunday that he will not release a depth chart until Friday, which isn’t normal procedure. What’s Tedford’s answer? He’ll do the same.

Tedford announced that junior Cesar Silva will handle field goals this season after performing well in camp. Asa Fuller worked field goals last year, but will focus on kick off duty full-time. Silva transferred to Fresno State this season from the College of San Mateo.

Senior running back Josh Hokit is wearing No. 9 now, which is retired in honor of former quarterback Kevin Sweeney. Hokit has already changed numbers twice in fall camp, going from No. 1 to No. 33, which coincided with his switch from linebacker to running back.

Senior defensive end Kwami Jones has been dealing with a back issue and has missed fall camp. Tedford said they’ll reevaluate his health around midseason and look to get him back into action.

“Well as in any Air Raid offense, the thought is really speed and space. Getting the ball to your playmakers out in space, and getting rid of the ball quickly. And then the challenges that that presents is tackling in space. And running to the football and making sure it’s not a lot of one-on-one out in the field. So it’s going to be really imperative that we run to the football and we can get guys around it because it’s an explosive offense. There’s no doubt about it. Tempo obviously is another thing. They’re particularly high-speed – it’s game pace. We’ve been practicing really fast, but games are a little bit different. They have weapons, there’s no doubt about it, and we’re going to have to fly around and tackle in space.”

On what stands out with USC:

“They’re very very talented, there’s no question about it. They’re USC. A lot of ability. It’s all the first game things that you have to make sure that you focus on. And you don’t get a chance to go live every day. You just can’t because your players end up getting hurt. It’s all the little things – ball security, decision making, obviously being on the road handling crowd noise. All those things. But you try to touch on every single thing you possibly can, take care of every detail. But you just know in the first game it’s brand new. They’re going to have new wrinkles obviously.

“It’s going to be really important for him just to understand to do his job and not try to do too much. Let everybody else around do their job as well. Trust his teammates, manage the game properly, make good decisions. He’s been here a while now. It’s going to be a great test for him against a great defense who flies around. He’s just got to manage the game and do his part and not get to amped up about it. Just play within himself. Never does a game go perfectly. You have to handle adversity through a game, and that’s what he’s going to have to do when it comes up.”

On the four captains being named:

“Juju [Hughes] and Mykal Walker on defense and Jorge [Reyna] and Netani Muti on offense. We always let the team vote on it, and typically we only pick two. But since it was so close this year between two guys on offense and defense we chose four. That’s a good sign that a lot of people are getting votes. When you get voted a captain it means your team has your respect. I think that’s true with all four of those guys.”

“It’s pretty solid, but there are a couple spots still that depending on how this week goes either a guy can start or get more or less playing time. We’re still working through that. There’s still a lot of work to be done in the next three days. So we’ll see how it plays out.”

On if the two-deep is more focused week-to-week based on matchups:

“Always. You have to take into consideration who you’re playing against.”

On the group of new, young receivers:

“We’re really pleased and our receivers both with the playbook and how they competed. Good young group of guys who come to work every single day and give it their best effort. Excited for them to have their first opportunity.”

On being 13 point underdogs:

“I don’t really care about the point spread. We’re going in to play a great football team. We have a lot of respect for them. We have a lot of respect for the venue, the Coliseum. It doesn’t really matter to tell you the truth. It wouldn’t matter if we were favored or not favored. We’re going out to play football one play at a time and give our best effort and see what happens.”

On advice for players going into their first game:

“Just to relax and trust your teammates. Obviously there’s going to be a lot of intensity. Awesome place to play. We just need to relax and trust our fundamentals and rely on one another. It’s going to be a really cool environment coming out of that tunnel. But you’ve got to start somewhere, and our guys have been working really really hard and it’s time to play. This is why we do all this work. This is why they’ve been lifting weights since January and running and practicing in the 102 degree weather for the last three weeks. It’s time to play now.”