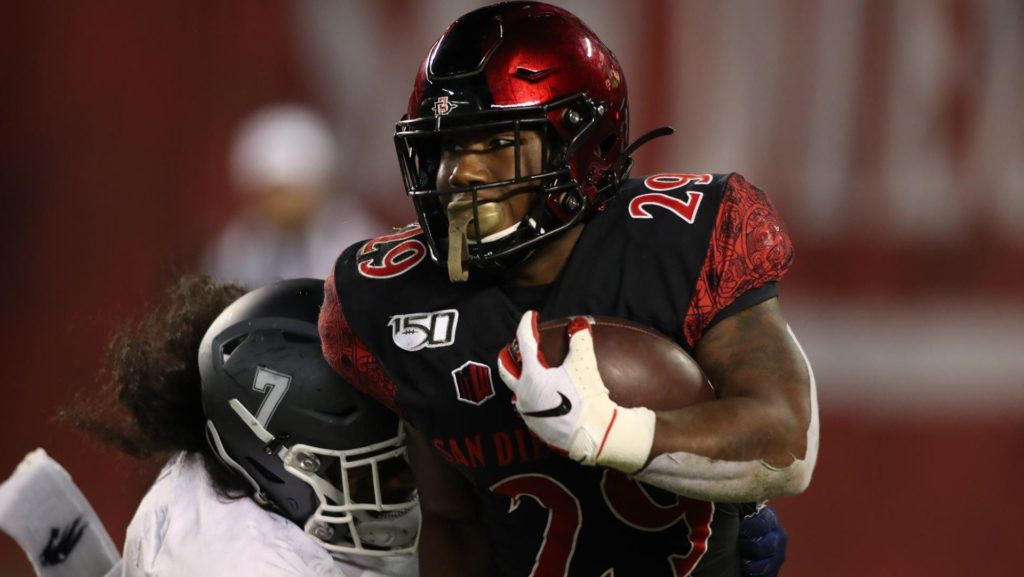 Fresno State’s offense will face its biggest test of the season Friday in San Diego as the Bulldogs take on the Aztecs.

The Aztecs (7-2) struggled opening the season against FCS opponent Weber State, winning 6-0, but they bounced back to defeat UCLA in Week2. They’ve played consistent the rest of the season, but their offense fell short in close losses to Utah State and Nevada.

It’s San Diego State’s defense that teams have to worry about, the best unit in the conference and one of the best in the nation. The Aztecs’ run defense stands out above all. The unit gives up only 65 rushing yards a game, which ranks No. 1 in the Mountain West and No. 2 in the country.

Teams struggle to find the end zone against the Aztecs to the tune of only 14.4 points per game, again, best in the conference.

The good news for the ‘Dogs is that the defensive scheme that San Diego State runs is the same thing they’ve seen for years under Aztecs head coach Rocky Long. Long joined the Aztecs as defensive coordinator in 2009 and was promoted to head coach in 2011. There won’t be any surprises on Friday.

“We know going in who San Diego State is,” Fresno State head coach Jeff Tedford said. “They’re going to run the ball. They’re going to be physical. They’re a little bit more diverse this year offensively, but they play as good of defense as anybody in the country.”

The defense isn’t as solid against the pass, but is still good enough to rank second in the conference and is a top-50 unit nationally.

Senior linebacker Kyahva Tezino is the center of the defense and is one of the best in the country at his position. He’s averaging over 8.5 tackles a game, and he excels at making plays behind the line of scrimmage. He has 8 tackles for loss, 3 sacks and 15 quarterback hurries. He’s also forced 2 fumbles and has one interception.

The Aztecs have another star on defense: senior cornerback Luq Barcoo, who is tied for second in the country with 5 interceptions. He had the performance of a lifetime earlier in the season against Colorado State. Barcoo had three interceptions on three consecutive defensive snaps.

Barcoo has been named one of 14 semifinalists for the Jim Thorpe Award, which is given to the best defensive back in the country.

On Offense, senior quarterback Ryan Agnew returns. He started seven games last season but came off the bench and only attempted 8 passes against Fresno State.

He’s not a world beater, and he doesn’t have an NFL arm like Utah State’s Jordan Love, but he’s mobile and has a 62 percent completion rate.

Multiple running backs contribute to the offense, the best being senior Juwan Washington who was one of the top rushers in the Mountain West last season. He’s not replicating that success this year though, averaging only 3.4 yards per carry.

Standout receiver Kobe Smith leads the way with 554 receiving yards and 4 touchdowns, by far the highest numbers on the team.

Overall as a unit, the offense ranks as one of the worst in the Mountain West. Out of the 12 teams in the conference, the Aztecs rank 11th in scoring, 10th in rushing, 10th in passing and 12th in total offense. They’re a bottom-20 offensive team nationally in both scoring and total offense.

San Diego State’s gameplan is simple: Play excellent defense and hope the offense does just enough to win games. It doesn’t always work – like in last week’s 17-13 loss to Nevada – but Long’s managed to win seven games in nine tries with an offense that does him no favors.

This will be the 59th matchup between the rivals and the 9th year the Old Oil Can Trophy is on the line. The programs first met in 1924, and San Diego State holds the series record 29-25-4. The winner of this matchup has gone to the Mountain West championship game every year since its inception in 2013, and it’s looking like that will be the case once again this season.