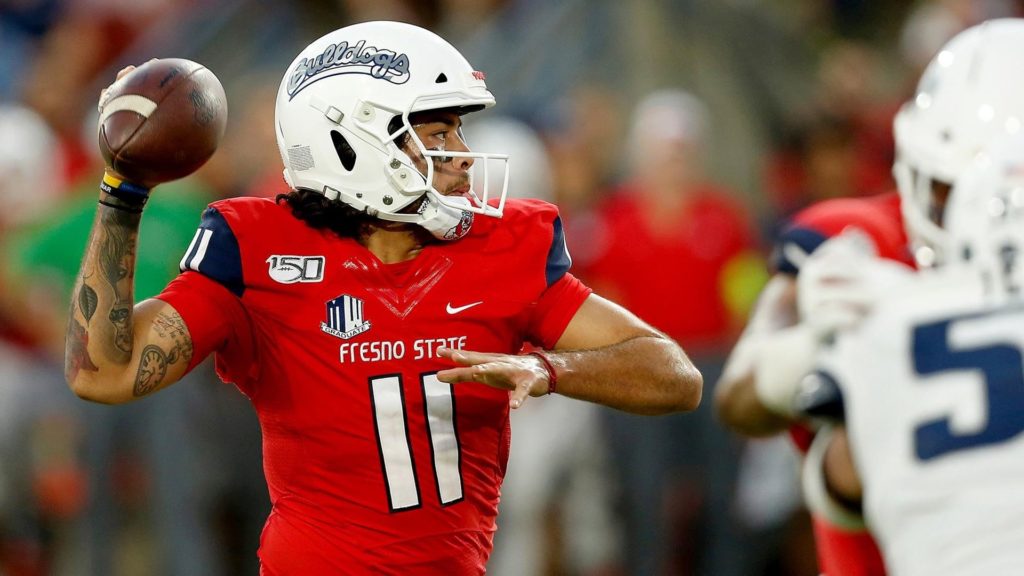 It’s been an up and down year for Jorge Reyna, and the senior quarterback’s Fresno State journey is coming to an end, starting with Senior Day on Saturday when the Bulldogs host Nevada.

After the disappointing loss at San Diego State last week, the Bulldogs are no longer in contention for the Mountain West title. But they still have a shot at a bowl game, and that falls right in step with Reyna’s football journey and mindset of making the best out of any situation, no matter how difficult it is.

He sat behind Marcus McMaryion for two years as the Bulldogs competed for the conference championship. After McMaryion graduated, Reyna was the only upperclassman left on the roster and quickly earned the starting job.

“My journey here was amazing,” Reyna said. “Junior college, you don’t have the best situation. You make the best out of your situation. It’s something that I’m very appreciative of my father teaching me that and then junior college teaching me that. Life isn’t going to give you top dollar, top shelf. No, you’re going to have to take it, and you’re going to have to take it with what you’ve got.”

That’s exactly what Reyna has done this season. He certainly wasn’t gifted an easy situation. Fresno State lost multiple starters on the offensive line, two top receivers and several starters on what was arguably the best defense in program history.

Reyna’s season started rough back at home against USC, throwing an interception late in the fourth quarter. He picked himself up and moved onto the next week where he came out firing against Minnesota, a team that later proved to be one of the best in the country.

But even that game didn’t go his way when he threw an interception in overtime which sealed the loss for the ‘Dogs. He’s led Fresno State to a 4-4 record since then and has been one of the few consistent pieces on a team that’s dealt with injury after injury.

“I think it’s one of Jorge’s strongest attributes, his ability to play day-to-day, game-to-game, and learn from mistakes honestly,” offensive coordinator Ryan Grubb said. “He’s done a nice job of that. He had obviously a rough week last week, and I promise you nobody took it harder than he did. He cares a ton. I think it speaks a lot to his upbringing and toughness and the kind of person he is.”

Reyna threw 3 interceptions last week, his worst performance of the season. But – while he’s been far from perfect – he hasn’t let his mistakes bleed from one day to the next.

A big reason for that is Reyna’s character and work ethic, which is apparent to anyone close to the team. Tedford called Reyna one of the best competitors he’s ever been around.

“I do take my losses hard,” Reyna said. “I don’t like losing, whatsoever. Despite giving everything I have, I believe I could keep giving more and keep withstanding it. But that’s just a testimony to my family.

“My family instilled that in my, preparing – despite circumstances you’re going to have to pick yourself back up and you’re going to have to keep working even harder. That’s just a compliment to my family. It’s showing them that they taught their little boy well, and these lessons that are occurring in my life through college, hopefully I’m able to flourish in my life and take it beyond the field.”

Grubb said Reyna has learned about responsibility in his time at Fresno State, and the quarterback never shies away from criticism or coaching.

“He takes coaching really well, and I think that’s what ultimately will make him successful in life, is that he’s able to do that,” Grubb said. “He’s not a guy that lets things weight him down. He tries to take out of it what he can and march forward. He’s a warrior.”

Reyna won’t go down in history with the likes of David and Derek Carr, Trent Dilfer, Kevin Sweeney and Paul Pinegar, but he wants people to remember him by his ability to work through mistakes and overcome tough circumstances.

“It’s the innate ability to respond to life, I tell people this all the time,” Reyna said. “Yeah, I threw an interception. Yeah, people were emotional about it. I get it. However, they’ve learned through lessons in their life when not everybody looks at you. However, my mistakes, the whole world sees. I’m glad that it is the ability for the whole world to see, because now I have young kids that can look up and say, ‘You know what? I want to see how he responds.’

“Because they might be going through situations similar, and some of them can’t handle it. There’s a big mental health push this year, and a lot of people understanding it. But I wish I could give them the ability to understand that despite circumstances, you’ve just got to keep fighting, keep going, and you never give up. That’s something I aspire to show the fans.”

There’s two more opportunities – possibly three with a potential bowl game – for Reyna to show the Central Valley who he is and to have that final experience with the Bulldogs on the field, starting with Senior Day.