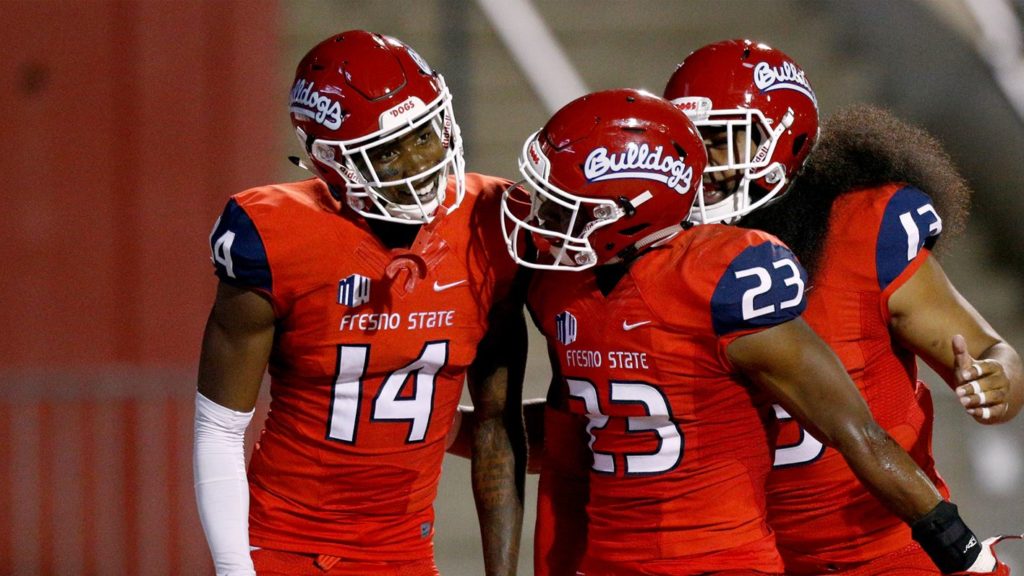 Giving up big plays has been an issue for Fresno State all season.

It was perhaps most apparent from the get-go against Colorado State when the Rams threw a 69-yard touchdown pass on the second play of the game.

The Bulldogs also didn’t have an answer for Rams’ wide receivers Warren Jackson and his 6-foot-6 frame, who averaged nearly 20 yards a reception. While the ‘Dogs won’t face a receiver who can match Jackson’s size, Hawaii still brings a talented group of receivers to the table that help make up the Mountain West’s No. 1 offense.

Hawaii’s run and shoot offense revolves around quarterback Cole McDonald and his four receivers that each have over 400 yards – Cedric Byrd II, JoJo Ward, Jared Smart and Jason-Mathew Sharsh.

Hawaii’s the only team in the conference that can boast four receivers producing at that level.

“It’s definitely different,” Bulldogs safety Juju Hughes said. “Most teams come in with one or two guys they like to target a lot. It’s different when you’ve got four guys over 400 yards receiving, so you see they really spread it around. You can’t key in on anybody specifically. Everybody’s a big factor.”

If the Bulldogs stay in their base defense and don’t bring on an extra defensive back to help in the pass defense, the linebackers drop back in pass coverage quite often on Saturday. They’ve got the speed at linebacker to do it.

Justin Rice has proven to be a true playmaker on defense and is leading the team in tackling. Arron Mosby used to play defensive back, and Levelle Bailey has shown early in his young career that he’s got the speed to compete at this level – as seen in his touchdown-saving tackle where he caught up from behind the Colorado State runner early in the first quarter.

But it won’t matter who the ‘Dogs bring in to defend against the pass if they don’t tackle well, defensive coordinator Bert Watts said. On many of the big plays they gave up last week, the Bulldogs had players in position that simply whiffed on the tackle – something that’s been an issue all year long.

“We’ve got to make sure that we’re running to the ball and we’re tackling,” Watts said. “It doesn’t matter what you do schematically unless you do that. That’s a big point of emphasis for us this week.”

Not only do the Bulldogs have to watch out for big plays through the air, they have to deal with McDonald’s running ability too, something that’s rather unusual out of a quarterback in such a pass-heavy offense.

McDonald is second on the team with over 300 rushing yards and is surprisingly fast for a 6-foot-4 quarterback.

“He’s showing his full capability as a runner now rather than just scrambling here and there,” Hughes said. “He’s showing that he can go all the way with it and really open it up, something we’ve known he’s been capable of. He’s putting it more on display now.”

Rice Added, “There’s definitely some designed runs in there, but his best attribute is getting out of the pocket right now and taking off. Because people are playing the pass so deep they’re past the sticks, and he’ll just run for a first down. That keeps the chains moving, so we’ve got to be aware of that with a good QB spy and not get too deep in our drops, and that should eliminate that.”

Although McDonald has improved from last year – and is a little healthier, Watts said – the Bulldogs had his number before.

In the matchup at Bulldog Stadium last season – a 50-20 Fresno State win – McDonald threw for 225 yards and a touchdown, which is below average for him. Hughes also had an interception that game. But with McDonald’s growth, it’s a different challenge this time around.

“I remember the whole game, every play of that game last year,” Hughes said. “He’s a real good quarterback. He’s not afraid to throw it in there. He throws it all around, uses every receiver in that offense. Everybody’s a big factor. It’s going to be a good matchup.”