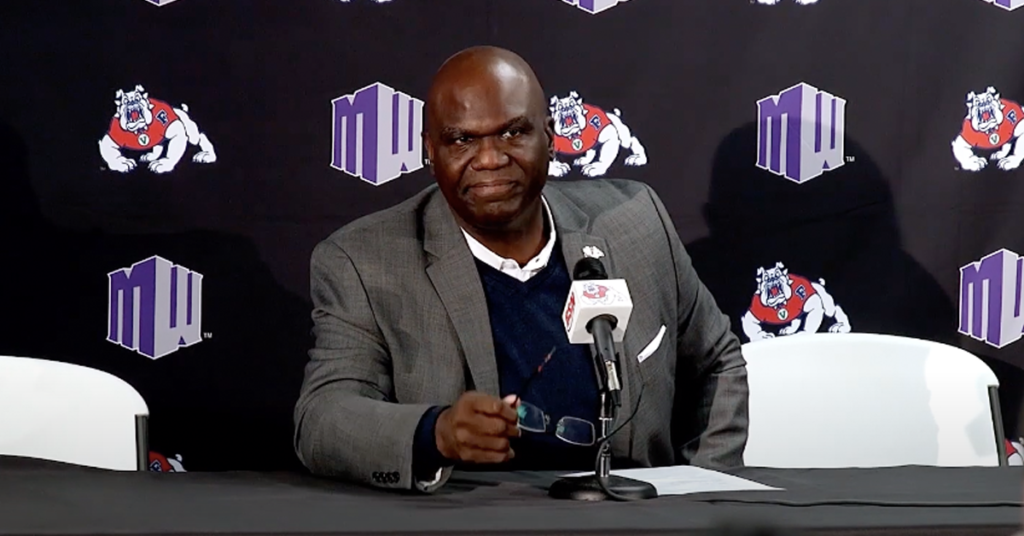 Will Fresno State student-athletes compete in the fall? Will new head football coach Kalen DeBoer be able to take the field at Bulldog Stadium on Sep. 5 for the season-opener?

Those are the questions that Athletic Director Terry Tumey is trying to find answers to, but the path to a solution amid the coronavirus pandemic is far from clear.

“If we look at the presumption of fall sports – and football probably being one of the more complicated pieces to that – what would it entail to try to keep our student-athletes, as well as our coaches and support staffs, all safe and protected in that environment? I tend to believe that that is the question that we’re all continuing to try to figure out and answer,” said Tumey in a teleconference Friday.

That answer starts with bringing students back to campus in some capacity.

“I think as we talk about football, it’s really not about the sport itself, but the introduction and trying to create an environment that is conducive for just the reentry to our campus, first and foremost,” Tumey said.

Earlier in the week, California State University Chancellor Timothy White announced that all 23 universities in the system will conduct the fall semester primarily in a virtual setting, continuing how the 2019-2020 school year finished.

“Consequently, our planning approach will result in CSU courses primarily being delivered virtually for the fall 2020 term, with limited exceptions for in-person teaching, learning and research activities that cannot be delivered virtually, are indispensable to the university’s core mission and can be conducted within rigorous standards of safety and welfare,” White said.

In response to the pandemic, Fresno State President Dr. Joseph Castro has assembled a Fall 2020 Planning Task Force which will determine how the university will operate come August.

The task force will submit a plan to Castro for both scenarios by May 22. Castro will study and discuss the plans with his cabinet and will announce a decision by early June, the university said.

Although neither scenario directly addresses athletics by name, the second plan will bring more students back to campus and does not explicitly say anything about cancelling major events.

That being said, there has been no official word from Castro, Tumey or the Mountain West on if athletics will be able to resume in the fall.

After White issued his announcement, Castro, Mountain West Commissioner Craig Thompson, and the presidents of San Diego State and San Jose State issued a joint statement on May 12.

“Certainly, all conversations are led by academics, as well as public health and safety,” the statement read. “Within that framework, more determinations are necessary. All three institutions will work closely with the Mountain West. No decisions on athletics have been made.”

On Friday, Tumey reaffirmed the university’s commitment to figure out the proper way to bring students back to campus, first and foremost.

“We here at Fresno State are taking things in the most fundamental states possible in order to understand just the reintroduction piece first,” Tumey said. “I think all of my partners throughout our conference and throughout the nation are looking at that as well, not to jump ahead too soon as it relates to the competitive aspect of it.”

Wicker told The San Diego Union-Tribune that he has been working on a plan to begin bringing student-athletes back to campus on July 7.

“We’re still working with campus and developing what our resocialization plan will look like to bring students back to campus so they can at least start working out,” Wicker told the Union-Tribune. “I basically wanted to pick a date that we could build to. The date that made the most sense was the beginning of the summer session.”

Tumey shared some of Wicker’s hopefulness that a summer return is possible.

“We are optimistic and hoping that there is a possibility of at some point during the summer we will be able to reintroduce student-athletes in some aspect, in some form or fashion, back to our campus,” Tumey said.

However, Tumey admitted that it is simply too early in the process to set a date on the decision.

“As it relates to timelines, I think that is a to be determined element, because we’re finding out information daily as it relates to how things are transpiring,” Tumey said. “I think it would be premature for me to put out any sort of timeline as it relates to the efforts that we have here.”

Whenever student-athletes return to campus, the university will have to be prepared in case a student-athlete contracts coronavirus. That’s something Tumey thinks could be an unfortunate reality.

“I think for the pervasiveness of what we’re dealing with here, I don’t know if that will be as much as an anomaly as many people would think given the complexity of the virus and how this transferred among individuals,” Tumey said. “I think having someone test positive, we should not be alarmed but be able to have a plan that would address it properly and appropriately.”

There are several other questions that Tumey, Castro and the university will have to consider as they make their decision on when to resume athletics:

Plenty of questions remain, but only time – and Tumey – will tell.