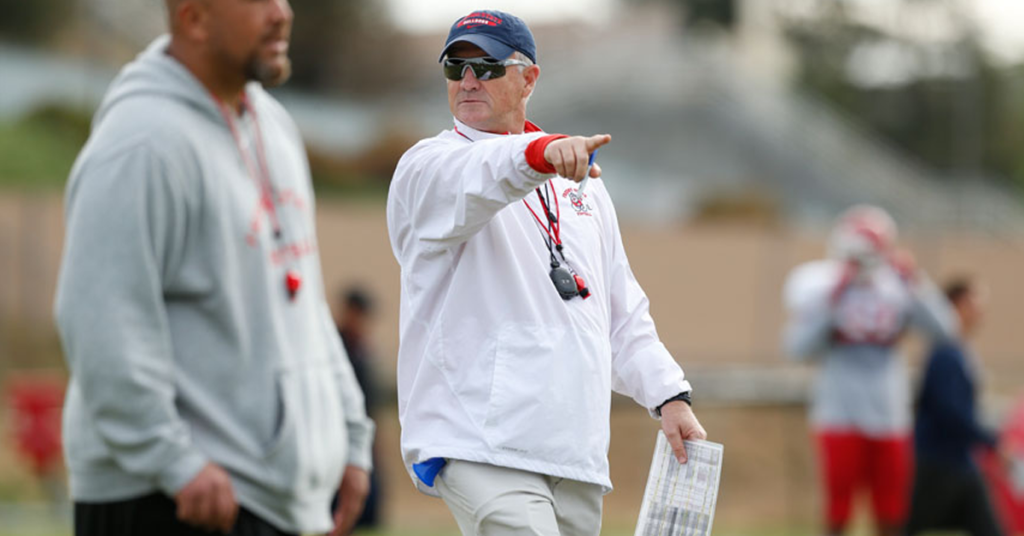 Coming off the bye week, the Bulldogs now tackle their Mountain West schedule looking to defend their conference title.

And so begins eight-straight games in conference, starting with a trip to Colorado Springs for a date with Air Force on Saturday.

“Had a good couple weeks of practice last week,” head coach Jeff Tedford said. “Had an opportunity to get a jump start on Air Force, unconventional for sure with the option. Great football team in all areas.”

The Falcons return home after a 34-25 loss to Navy, bringing their record to 3-2. One key piece Tedford pointed to about Air Force is that all 22 starters are juniors and seniors.

Tedford and Air Force coach Troy Calhoun are two of only 18 head coaches in the nation to be leading their alma maters.

“I think you’re fortunate,” Tedford said. “If there’s 18 that do that, I think it’s really a great honor to go back to your alma mater and not just take your playing days, but the pride and tradition of what it stands for. To be able to be a part of it is pretty special.”

The Bulldogs have played in Colorado Springs just three times before, and they’ve only come away with a victory once before. In 1997 – when Tedford was the offensive coordinator under then-head coach Pat Hill – Fresno State won 20-17 over an undefeated Air Force team that was ranked No. 18 at the time.

For the Bulldogs, there’s a noticeable change to the depth chart. Wide receiver Emoryie Edwards is listed for the first time as a starter after his breakout first game against New Mexico State. But as we’ve seen so far, the listed starters at the receiver position aren’t always who see the field first given how deep the group is.

“It may say that as far as being a starter there, but anybody can start at that position,” Tedford said. “I wouldn’t put too much into that. We have a group of guys there that are all trading off. We try to trade those guys out as much as possible. But it was nice to get Emoryie back.”

On the preparation for Air Force:

“We’ve played diverse teams before, but we really haven’t faced the option like we’re facing this week. So it always brings a challenge, and one of the biggest challenges with it is trying to simulate it in practice. Most other teams that you play, you can do a pretty decent job of simulating what they do. But with the precision and the timing and all that goes into the option, and how diverse they are, it’s pretty difficult to simulate it. So we’re doing our best to put guys in a position to be able to see what they do.”

On having a young team:

“Everything’s new. Each week’s a new challenge, but I’ve been very pleased with our young guys. We’re a very young football team, but I’m very pleased with the work ethic that we have and the way they focus on what needs to be done. You have to start somewhere. When they’re young like this, having game experience is really valuable. I’m really happy with our young kids, and I think they have a really bright future.”

On conditioning for the high elevation at Air Force:

On having the players take time to recognize and respect the Air Force Academy:

“We will for sure. We have a great deal of respect for not just their football team, but for what the military does for us and all the people at Air Force. We will go in there with a great deal of respect not just for their football team, but for the academy itself and the people that will be at the game, the cadets. It’s a great experience to play there.”

On kicker Cesar Silva bouncing back against New Mexico State:

“It was great for him. He’s a very good kicker. He had all the balls solid the game [against Sacramento State] that he missed three field goals, just a little bit wide right. So you go back and you pick up some things and you look at fundamentals and technique, and it could be just an inch or two of foot placement or something like that that makes a big difference in a kicker. So it was nice to see him bounce back and regain his confidence.”

On finding the best spot for Mykal Walker on the defense:

“You always have to look at where the depth is by position. You try to put your players in a position to be successful. He plays a lot of different positions. He didn’t exclusively move to a certain position. He can play mike [linebacker]. He can play defensive line. He can do different things. You try to move him around and put him in a position to be successful. But with that comes who’s going to fill in at linebacker. And so [Levelle] Bailey, who’s a true freshman, is playing and doing a nice job as a true freshman. We’ve been very pleased with him.”

“He does an excellent job not just with the option, but he can throw it. It’s decision making. It’s all the things that he does with being able to either check plays or get the ball in the perimeter or make the right reads in the option. When you have an experienced guy like that who’s done it, obviously that brings a challenge. Then when you can pull it out and throw it, it makes it very difficult to defend.”