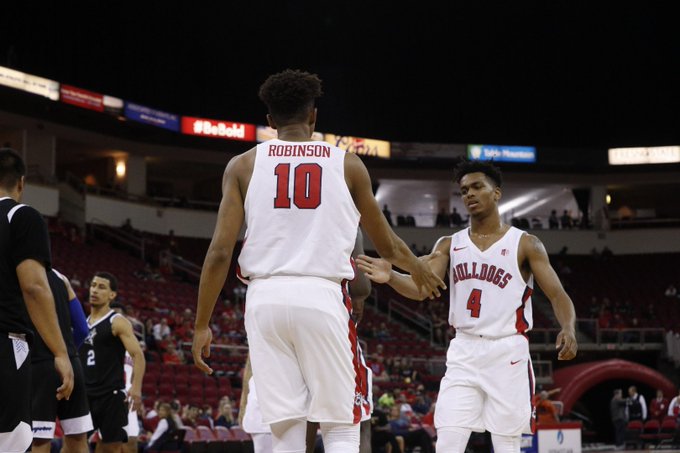 The Coyotes play in Division 2, so they didn’t present much of a challenge for the Bulldogs in any aspect Sunday. But due to sloppy play to start and missed opportunities on the offensive end, the Bulldogs quickly found themselves down 10-4 in the first five minutes.

Forwards Nate Grimes and Orlando Robinson and guard Mustafa Lawrence led the physical charge back leading the ‘Dogs on a 10-0 run with every basket coming in the paint. The Bulldogs didn’t look back and held the Coyotes to just 37 points the rest of the game while moving the ball better and creating space on offense.

“We learned that when the ball moved a little bit in the second half, that’s when you shoot 63 percent and 7 for 10 from three because you’re taking good ones,” head coach Justin Hutson said. “It also reaffirms that the new guys, young guys, deeper rotation, guys in and out, guys hurt – inconsistency is what we’re good at right now.”

CSUSB was averaging nearly 86 points per game coming into the matchup, but the Bulldogs’ defense was too much to handle – Fresno State forced 18 turnovers and had 10 steals.

Guard Aguir Agau came off the bench and led Fresno State with 20 points in just 18 minutes. He was incredibly efficient from beyond the arc making 5-6 three pointers.

Agau said the biggest difference for him from last season to this season on three pointers is that he’s slowing down and seeing the floor first before he tries to score. He made threes at a 33 percent rate last year and so far this season – through four games – he’s made 60 percent of his attempts.

Robinson was second on the team with 16 points and was the perfect compliment for Agau’s outside game. The freshman forward made was 6-7 and also added 7 rebounds.

Grimes found himself in foul trouble early, so he only played in 10 minutes. Even though he was only on the court for a quarter of the game, Grimes made an impact with 7 rebounds and 3 blocks.

Grimes’ foul trouble gave Hutson a chance to get extended looks at center Assane Diouf. The freshman from Senegal struggled to integrate himself early on the offensive end, but he used his 7-foot-2 frame to grab 5 rebounds.

Senior guard Noah Blackwell led the ‘Dogs with 8 assists and took an extra step as a leader, Hutson said.

“Noah led a little bit today,” Hutson said. “I think this was the first day I’ve ever seen Noah lead. He called for some outlets. He matched people up on the floor. He was smart, aggressive. It’s not always about making the shots.”

Hutson said he thought Blackwell “grew up a tad” Sunday.

It wasn’t all good for the Bulldogs though. They struggled from the charity line going 18-35.

The Bulldogs were without freshman guard Jarred Hyder, who was leading the team with 17 points per game. Hyder has been held out of practice with a hip flexor injury and is day-to-day.