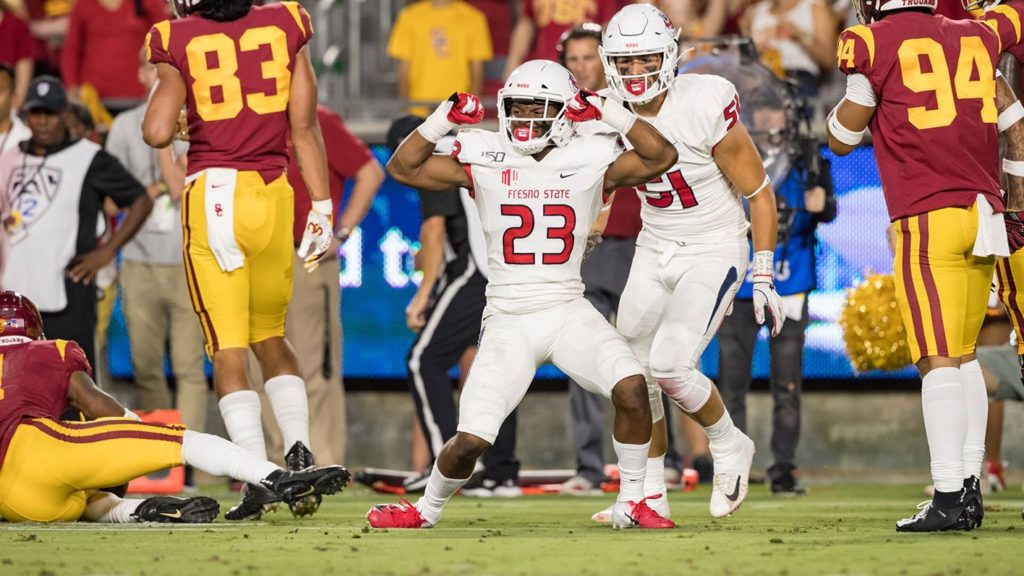 With the loss to San Diego State, the Bulldogs are out of contention for the Mountain West. However, at 4-6, the season isn’t over just yet. Fresno State still has something to play for, starting Saturday against Nevada.

It will be the last time the seniors will ever play in Bulldog Stadium, so head coach Jeff Tedford said he wants them to have a good memory of their final time out on the field.

“You just wish the best for them that they could have a good memory coming up that ramp at the end of this game,” Tedford said.

If the ‘Dogs beat Nevada, they’ll next set their sites on defeating rival San Jose State and becoming bowl eligible, which Tedford said is the No. 2 goal every year behind winning the conference.

“It’s on the list of what you go into the season looking to try to get done,” Tedford said “And here we are in game 11 and we still have a chance to be able to get that done, but it’s going to take a lot of hard work against a good football team.”

Getting to a bowl game is important for other reasons outside of just making the postseason, Tedford said.

“Bowls are a reward,” Tedford said. “They’re exciting. They’re great experiences for the kids. It provides more practice opportunities, which is kind of in essence like an extra spring football. Bowl games are always exciting, and that’s why when they say there’s too many bowl games I don’t agree with that philosophy, because I think anytime a football team has an opportunity to go play in a postseason game it’s a great experience for the kids.”

But if the Bulldogs don’t pull through on senior day they’ll miss out on bowl season for the first time under Tedford.

Hughes is the most experienced of the group. The Hanford native has played in 50 games, starting the last 38 of in a row.

Punter Blake Cusick will also be making his final appearance in Bulldog Stadium. He’s been a mainstay on special teams for years and, like Hughes, has played in 50 games.

Walker transferred from a Division 2 school and had to sit out in 2017. He’s started all 24 games the last two seasons.

Reyna was a junior college transfer, so he doesn’t have the extensive playing time as the other senior starters, but he’s started all 10 games this season and – barring injury – will start the final two games.

Tedford said his message to the senior QB is to keep competing at the same level he has all season.

“Jorge is one of the best competitors I’ve ever been around,” Tedford said. “The way he’s taken the team on his shoulders and he’s trying to make plays with his legs. He’s a very strong competitor – just do his job. I think last week he was trying to do a lot of things because he had a lot of pressure on him as far as pass rush and things like that and trying to make things happen.

“But just do his job and keep doing it. He prepares well during the week. He goes into games ready to go, and he takes losses very hard. He takes them personal. I’m really proud of Jorge. I’m really proud of the way he’s competed this season. He’s a tough kid. Just like any of the other seniors, you just wish the best for them that they could have a good memory coming up that ramp at the end of this game.”

On the team’s focus this week:

“It’s like every week, to go out and play our best and try to reach our full potential. But it’s senior day, so it’s a special day. Typically those are emotional days for the seniors, their last time in the stadium. We still have a chance to earn bowl eligibility, so we’ve got to take one. Nevada’s a good football team. They’re already bowl eligible and had big win against San Diego State. They had a bye this last week, so they’ve had a couple weeks. But, senior day, trying to get bowl eligible.”

“Tough team, very well coached team. Playing really really hard, so quality football team. Defensively they play very hard, very physical group. Offensively they spread the ball around, they can hurt you in a lot of different ways. They’ve done a great job obviously to have six wins right now – Purdue early in the year, so good football team. Probably most likely will come in here with a lot of confidence. We were very fortunate last year to win, I’m sure they’re going to be very motivated to redeem themselves from that. We’ll coached team, a lot of players that play really hard.”

“Playing efficient and not really turning the football over a lot. That’s key. But I thought he played really efficient against San Diego State. Made some key plays when he needed to, and they did a decent job of protecting him. They have weapons all around the field. They have very good receivers, and they can run the football and he’s very efficient with what he does.”

On his message to the Red Wave:

“I appreciate them coming out. We have one more time in the stadium for this year, and to be able to send these seniors off with great support I think would be big. And to help us try to accomplish getting a victory. To help us with one step. We have to win two games obviously. You can’t get there without winning the first one. If they would come out for the last game at home and show these kids some support, because these kids have earned it. You take a look at these seniors, they’ve been through a lot of ups and downs too through their early career and then having success and then this year having the goal of trying to continue to be champions and it didn’t happen. But I think it would be great if people could come out and just pay tribute to these seniors and back them and create an environment that would be long lasting for these kids.”