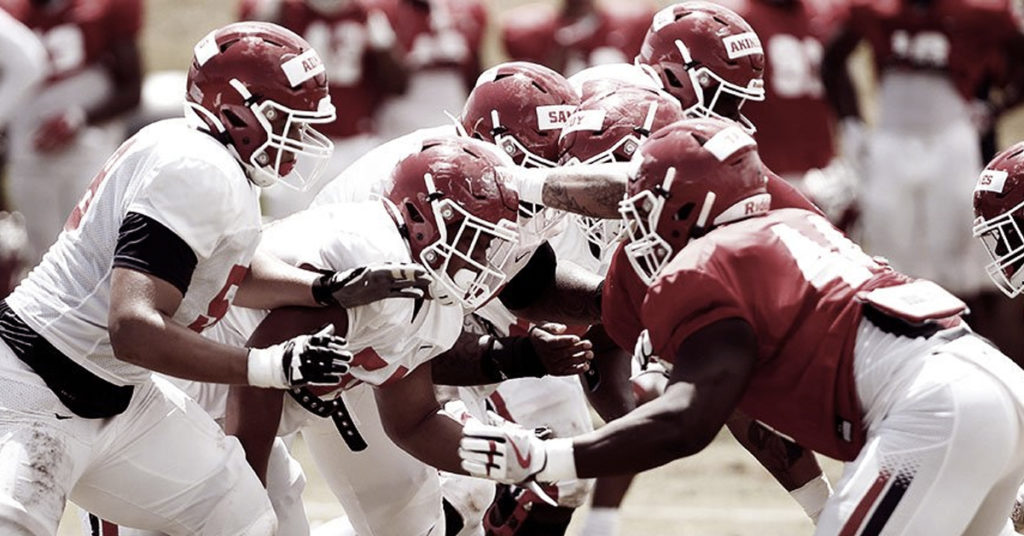 For Fresno State’s defense, it’s all about playing assignment football Saturday against Air Force and the triple option.

The triple option is used sparingly across the country, with only a handful of schools running it. Air Force – and the other military academies for that matter – has run the option for years under head coach Troy Calhoun.

“They do it well. It’s fast,” linebacker/defensive end Mykal Walker said. “You’ve got to have your eyes right. It’s just something real disciplined. It’s the true offense of a team like Air Force, Army, Navy, those teams like that. They run it really well.”

In the triple option, the quarterback generally takes the snap from under center and has the option to hand it off down the middle to the fullback or keep it himself and run outside with the option to pitch to the tailback. It’s all based on what the quarterback reads as the play progresses, giving him the ability to make the split-second decision on where to run the ball depending on where the defense is positioned after the ball is snapped.

So how do you defend against the triple option?

It’s all about the individual assignments and keeping your eyes disciplined, defensive coordinator Bert Watts said. Although the linebackers play a prominent role in stopping the run, no single position group is more important than the others.

“Everybody’s got a role to play, and when it comes to the option, everyone’s got a responsibility that they have to do a great job of playing,” Watts said. “You can’t play all three phases of a triple option. You have to do your job and do it well and disciplined and keep your eyes focused on what that job is. It stresses everybody, and that’s why it’s such a good offense, because it stresses all 11 guys on the defense.”

Linebacker Justin Rice gave a simple explanation for what the assignments are on defense against the triple option.

“Inside guys take care of the dive, outside guy strings out the quarterback making time for everybody to rally for the pitch,” Rice said.

Walker added, “You want to take two people each guy. You’ve got the quarterback, the fullback and you’ve got the running back. As long as those people take those guys out of the play, you should be alright.”

And even though you know what you’re getting with Air Force – the best run game in the Mountain West and fifth best nationally – you can’t just stack the box with the safeties every play.

Watts said Air Force tries to lull their opponents to sleep with run after run until the quarterback takes a shot downfield on a deep pass, which the Falcons have done successfully so far this season.

“It’s up to us to make sure we maintain great eyes and great vision so those plays don’t happen,” Watts said.

Strong safety Juju Hughes will be right in the mix for trying to stop the big-play potential from Air Force.

“You’ve definitely got to adjust to what they do, but it’s not a dramatic change where we’ll have everybody down in the box,” Hughes said. “Nothing crazy like that. They definitely do some things where you have to be aware of, change their alignment just a little bit, nothing too dramatic though.”

That big-play threat lies on the shoulders of Air Force quarterback Donald Hammond and his strong arm – an uncommon weapon in a typical triple option offense.

“He’s a good strong runner, really good arm,” Hughes said. “Most of the time in option football, quarterbacks kind of just get the job done when they need to – somebody that can just get the ball where it needs to be. But he has a really strong arm, actually one of the better triple option quarterbacks I’ve seen. Knows where he wants to go with it, has his plan, and he does it pretty well.”

The Bulldogs last played Air Force in 2016, so this is the first test for head coach Jeff Tedford’s coaching staff against a triple option offense of this magnitude. However, in 2017, Fresno State faced a New Mexico team that a version of the triple offense with spread concepts with shotgun formations.

“It was a little easier,” Rice said. “It wasn’t hitting down hill. Definitely getting that downhill right now in your face is going to be a little different from that, but the triple option’s still the triple option.”

While New Mexico’s version of the triple option was different from what the ‘Dogs will see against Air Force, it still required the same principles of assignment football, Hughes said. Fresno State won that game 38-0.

“Everybody has a job in assignment football,” Hughes said. “They make you use all 11 guys every play, so everybody has to do their part. You’ve just got to stay home and do what you’ve got to do.”