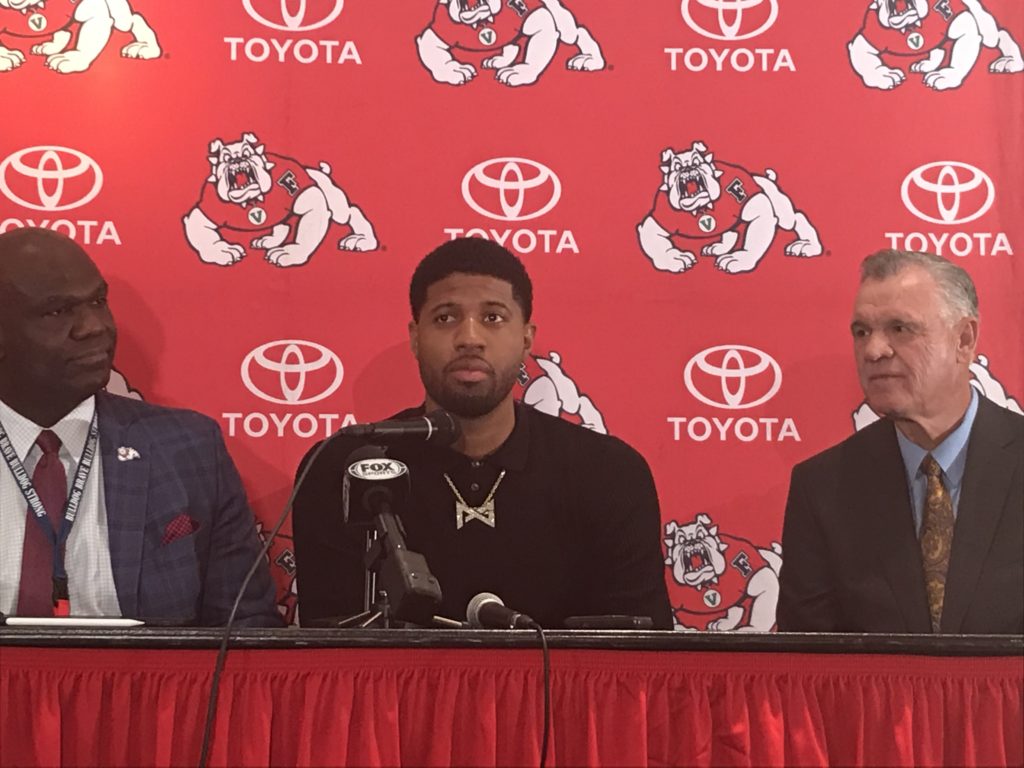 Paul George was immortalized in Fresno State history Sunday when his No. 24 jersey was retired at the Save Mart Center.

“Today is a day where we’re bestowing our highest honor in the area of basketball, and that is to Paul George,” Fresno State Athletics Directory Terry Tumey said. “During his time here he’s done and amazing job of not only being a leader and being a quintessential professional for us collegiately, but also in professional basketball.

“For our leaders and what we do in the classroom and we look for models, I don’t think we could find a better person to model our student athletes about and what they do than Paul. Paul George, for us, is a quintessential Bulldog, and this place will be his forever.”

George thanked the fans for always supporting him from his first day in Fresno through all the ups and downs of his NBA career.

“You guys mean the most to me,” George said. “It’s always love every time I come back here. It’s always easy to come here because you guys make it welcoming, and I appreciate every single one of you guys who’ve been here for me.”

“I have said often times that those were some pretty turbulent times for those of us that have been around – and there were challenging times with a lot of the sanctions and things – and Paul came here,” Cleveland said. “Because Paul came here, because Paul was successful here – but more importantly because he’s been so successful in the NBA – he made it OK for scholar athletes, for outstanding high school players to come back to Fresno State.

“Over the past several years, I think it’s because of Paul making it OK for high school student athletes to be in Fresno and be a part of this prestigious program. So I think maybe his greatest legacy is that he opened the door again for great high school young men from around the world to come here and be a part of this program. So he’s got a lot of talent, and we can talk about that, but most importantly I think it’s the character of this young man that is most impressive.”

George expressed his gratitude for Cleveland for bringing him into the program and for mentoring him, and he thanked Tumey for the opportunity to return to Fresno for the ceremony.

“Today I am more than grateful and more than honored and humbled to have this – wouldn’t have dreamed this in a million years to be able to come to Save Mart Center to be able to look up and see 24 hanging in the rafters,” George said. “This is special.”

In 2014, Fresno State retired former player and head coach Jerry Tarkanian’s No. 2 jersey. George is the only player to receive the same honor as Tarkanian in program history.

“Tarkanian outweighed anything that I could’ve done here in my two years, but to be able to have my jersey up there next to his, it means the most to me,” George said. “It means a lot because this is a place where I called home and a place where I enjoyed my time here. Honestly, I gave everything that I could’ve in my little scrawny body. I loved to put on the red white and blue and loved to perform in front of the fans here – speechless on the words to even find what this moment feels like right now.”

George is from Palmdale, California, and was happy to come play for Fresno State so his parents – Paul and Paulette – could come watch him play. He joined the program in 2008 and was ready to go from the start – he scored 14 points in the Bulldogs’ season-opening win against Sacramento State.

“That was a big emotional night, the first time we stepped on the court, we laced them up,” George said. “I was real nervous, butterflies. I was looking forward to it. This is what I came here for. This is what I signed up for. So I was ready to get out there.”

After his sophomore season, George declared early for the NBA Draft, and he didn’t wait long to hear his name. The Indiana Pacers selected George with the 10th overall pick, and the organization changed almost immediately.

Before George’s arrival, the Pacers had missed the playoffs four years in a row, but he led them to the playoffs in six of his seven seasons in Indiana.

He suffered a fractured right leg in 2014 while training with the U.S. Olympic team, which caused him to miss almost all of the next season. Injury. But he bounced back and returned to his superstar form.

George was traded to the Oklahoma City Thunder in 2017 and played there for two years alongside All-Star Russell Westbrook. He requested a trade to the Los Angeles Clippers to team up with All-Star Kawhi Leonard in 2019.

NFL quarterback Derek Carr, New York Yankees right fielder Aaron Judge and George make up the only trio in the nation from the same school to each be named an All-Star in their respective sport.

“This is my alma mater here,” George said. “I want the best. I want the most for this school. I want this school to succeed far more and for the program far more than I was able to take it.”