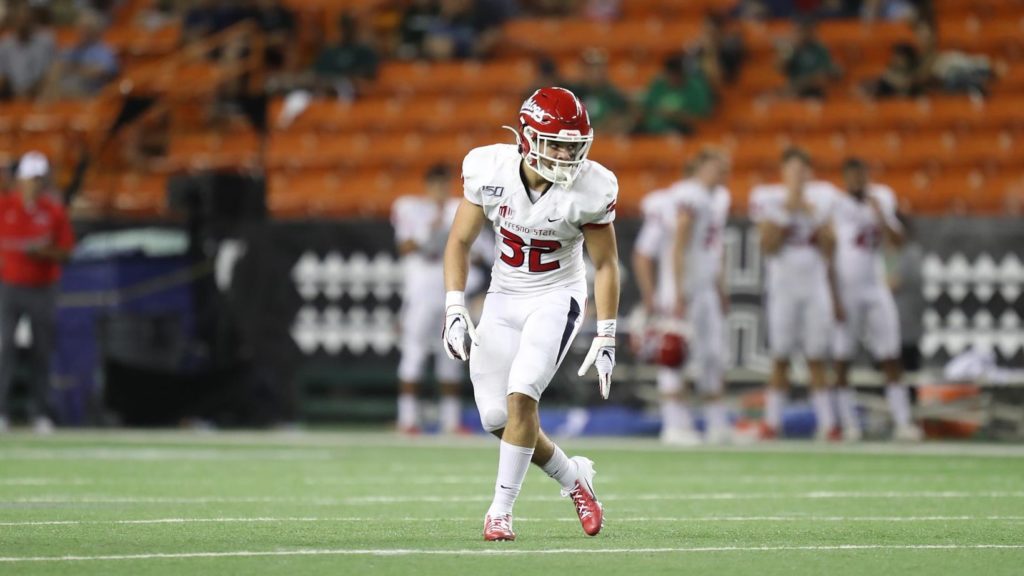 In order to counter Hawaii’s pass-heavy scheme, the Bulldogs brought in a fifth defensive back to play the whole game. Not only did it work, but freshman defensive back Evan Williams earned Mountain West Defensive Player of the Week because of his performance.

“It’s a crazy honor,” Williams said. “The Mountain West brings tons of talent every week. So just to be recognized as one of the best this week, that they recognized my performance is a pretty special thing.”

This season he’s mostly come on to help defend on passing downs. But with the situation against Hawaii calling for an extra defensive back all game, he was the go-to-guy. He was thrust into the spotlight in his first collegiate start, and he didn’t disappoint.

Williams was second on the team with 9 tackles and had the game’s lone interception, the first of his career. Hawaii quarterback Cole McDonald tried to hit his receiver on a slant route on the left side, but Fresno State strong safety Juju Hughes played tight coverage and tipped the ball in the air, which Williams got with a diving catch.

“I’ve got to shout out Juju Hughes, he broke on a slant ball pretty well, tipped the ball up in the air, gave me a great opportunity to make a play,” Williams said. “I was just covering my dig route. He was covering his slant ball, they threw it to him, next thing I know, the ball’s popped in the air. We’re ball hawks at Fresno State – ball’s in the air, it’s ours. That’s our mentality. So I just went and got it, celebrated with the guys. It was awesome.”

The interception came at a critical time for the ‘Dogs. Fresno State just took a 31-24 lead, and after Evans came up with the turnover in the fourth quarter, the Bulldogs were able to capitalize and go up by 14.

The defensive back’s performance should bring Bulldogs fans some peace with losing Hughes to graduation after the season. Williams is listed as Hughes’ backup at strong safety, and his development is similar to starting free safety Wylan Free.

Free was a backup last season, but came on as the fifth defensive back and started the Hawaii game. When the free safety spot opened up this year, it was his to lose. Williams could follow a similar path since he’s positioned himself well to take over for Hughes next season.

“I learn so much from [Hughes] every day,” Williams said. “He’s one of the role models that I see on this field day in, day out. Just his commitment to the game and just dedication, and also his work ethic. He’s really inspiring, just as somebody as a freshman looking for some inspiration, looking for somebody to pick up after. He’s a great role model, he taught me a lot of the defense, and he’s just helping me in meetings in everything.”

While he may not have an opportunity to play a full game again this season since the ‘Dogs won’t face another offense like Hawaii’s, Williams proved to be – at minimum – a solid depth piece that has what it takes to compete in the Mountain West.

With the number of young cornerbacks rotating in because of injury, Williams will certainly play a role if the Bulldogs win the West Division, starting Saturday with Utah State and quarterback Jordan Love.

Although Love isn’t having the same season numbers wise that he had last year, he’s an NFL caliber quarterback that could hear his name called early in the 2020 NFL Draft. JD Williams said Love has the tools to be one of the top quarterbacks selected.

“He’s the real deal,” JD Williams said. “He’s the piece that makes that thing go there. He’s got a great command of their offense. He can put the ball where he wants to put it. He’s an accurate thrower. We’ve got a big challenge.”

Evan Williams added, “We know he’s a special guy. He could stretch out the defense and make difficult throws in tight windows. We’ve just got to be prepared to play fast. It’s an awesome opportunity just to play with a great quarterback like him. Just to be able to learn from it and hopefully make some plays on the field. I’m excited for the opportunity.”