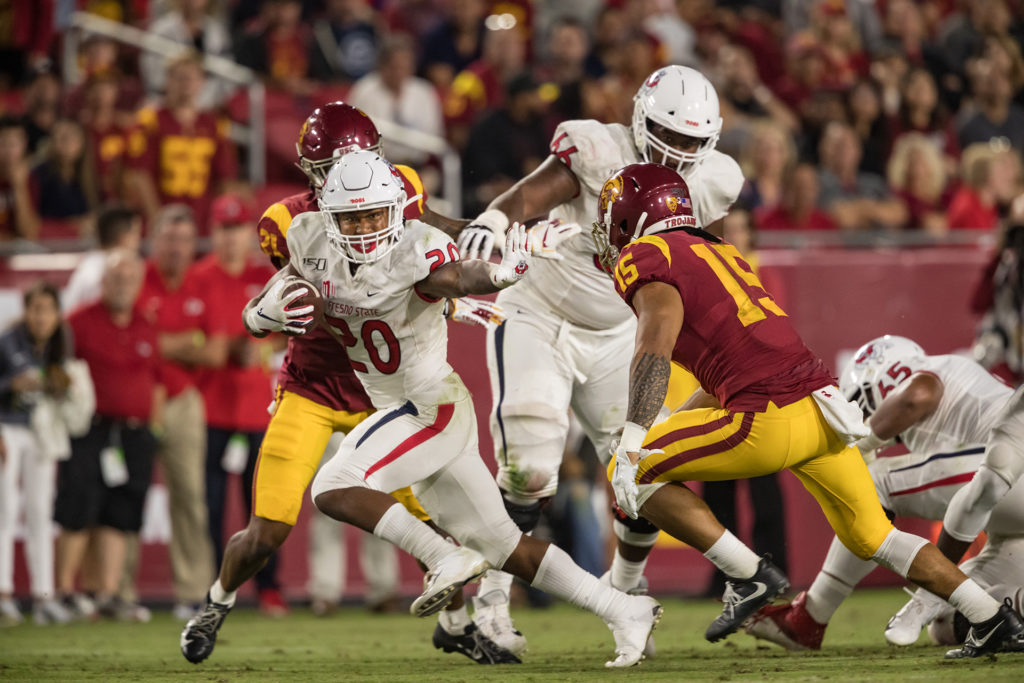 About two weeks after revealing the 2020 fall football schedule, the Mountain West released the national television package on Monday, giving Fresno State seven opportunities to draw eyes from across the country.

However, the broadcast for Fresno State’s first game of the season is still up in the air as the only game to not have been picked up by either CBS Sports or Fox Sports.

After the Bulldogs open the season at home against Hawaii on Oct. 24, they will have a Thursday night game looming against Colorado State at Bulldog Stadium.

“Sometimes being simple and having that quick turnaround is a good thing, because you don’t overthink things with your schemes, and you just let guys go play,” said head coach Kalen DeBoer in a press conference Monday. “And just knowing how Coach [Ryan] Grubb and I have worked on offense, shoot, hearing that schedule that’s exactly what I’m thinking already.”

Another way to look at the short week is that the players will be able to have a day or two off before gearing up for UNLV in Week 3. Those couple days of rest could make a difference in a shortened season that does not offer any bye weeks.

“I kind of like that there’s a couple days in there to ease up, because our guys will have been going for five weeks strong up until that point,” DeBoer said. “So a day or so of rest leading into UNLV the next week is a good thing. We’re always going to look at the positives. Yep, it’s a quick turnaround, but it’s a quick turnaround I’m sure for them as well.”

DeBoer compared it to his time as the offensive coordinator with Eastern Michigan – a MAC school – from 2014-2016. The Mac has often gone against the grain of college football and played weekday games. Over the last several years, those games have picked up the name MACtion from fans and the media.

“It’s a quick turnaround for sure,” DeBoer said. “I guess the MACtion season that I was a part of, that experience is going to come into play when you play and day and every day. You have short weeks and long weeks, because that’s going to be the situation.”

Following Week 2, the only other non-Saturday game comes on Friday, Nov. 27, when the Bulldogs will host San Diego State in the battle for the Old Oil Can. Outside of Week 1, all games will be broadcast on CBS Sports Network, FS1 or FS2.

With the season quickly approaching, Fresno State held its only scrimmage of fall camp last Sunday, giving the Bulldogs a chance to simulate game scenarios to an extent that they don’t usually get in a normal practice.

“It went well,” DeBoer said. “What I’m really pleased with our team is how quickly we’ve become good at our tempos, protecting each other, but being able to play hard and play fast and play aggressive. That’s a sign of a mature football team.”

The quarterback competition is still open – between Jake Haener and Ben Wooldridge – and the scrimmage didn’t make things any easier, DeBoer said. Both players continue to produce in practice and have stepped up as leaders, and the decision should come by the end of the week.

“It’s going to be tough,” DeBoer said. You’ve got two guys that want this position really bad, and they’ve been doing a great job. And the thing I’ve really enjoyed is how they’ve handled each other. That starts in the meeting room, with how Ryan Grubb runs the meeting.

“I hear nothing but positive things on how those guys talk about each other when they’re around the rest of the team. That makes me feel good about how we’ll handle it. I know someone’s certainly going to be disappointed, but they’ve both got to be ready to go. We know anything and everything can happen this season. We’ve got to have two great ones at the minimum.”