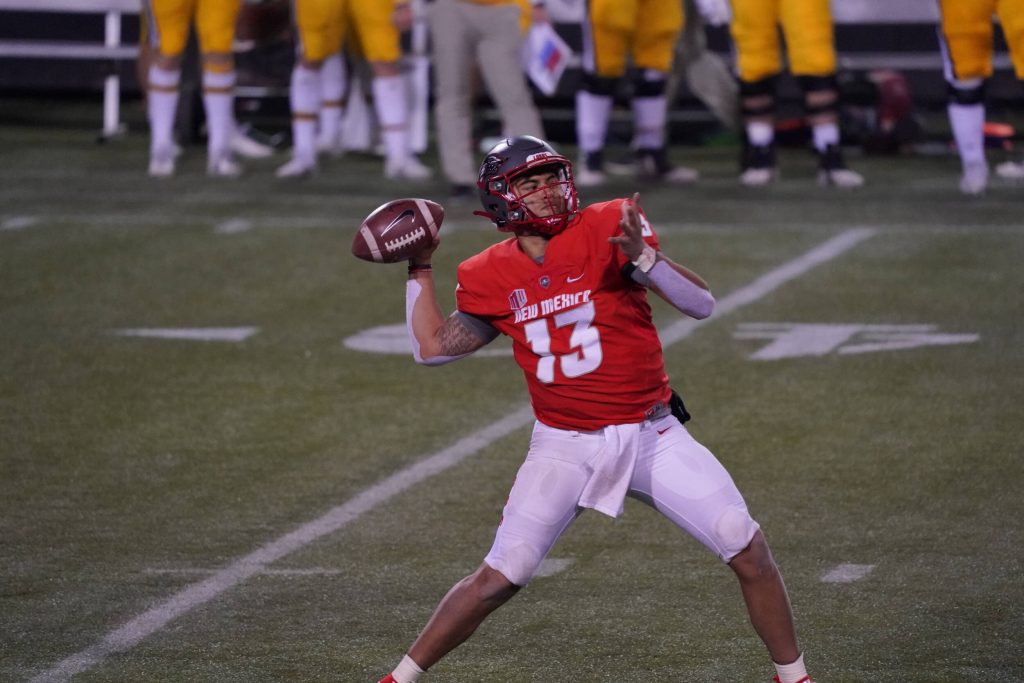 At 1-5 on the season, New Mexico doesn’t exactly strike fear into the hearts of the Bulldogs.

But the Lobos did manage to pick up their first win of the season last week, 17-16 over Wyoming, and two of the losses to Hawaii and Nevada were by a touchdown or less – better than Fresno State’s results against the same teams.

New Mexico’s strength on offense is in the run game. Fresno State defensive coordinator Williams Inge said the Lobos like to run what he called “the new age of triple option.” The Lobos won’t attack in exactly the same fashion as a traditional triple option team such as Air Force does, but Inge expects them to run zone read options and consistently get the ball to the edge to let their skill players make something happen in space.

“It’s very challenging, because what you have to be able to do, you always have to have players filling in their interior gaps, players on the edge to be able to set the edge of the defense on the quarterback, as well as players in the exterior edge being able to be prepared to play the pitch when it shows up or wherever it may come from, because it doesn’t always start off in the backfield,” Inge said.

With the option attack, New Mexico has the No. 4 ranked rushing offense in the conference averaging 178.5 yards per game. However, the successful rushing attack has not translated to the scoreboard. New Mexico has scored only 19.7 points per game, coming in at 10th in the Mountain West.

Many of those scoring struggles can be attributed to a passing game that has been hampered by injuries.

New Mexico’s top three quarterbacks are injured, so walk-on freshman Isaiah Chavez will get the start. He has played in two games this season, and his stat line reads as follows: 5-10, 55 yards and 1 touchdown.

If the injury bug makes matters worse for the Lobos and Chavez gets hurt, head coach Danny Gonzales will lean on 5-foot-7 running back Bryson Carroll to take the snaps. While Carroll only has racked up 97 rushing yards on the year, he has thrown two passes, both of which were touchdowns.

While New Mexico’s offense does not look like it will prove to be too challenging for the Bulldogs, the Lobos’ defense is coached by Rocky Long – the former longtime San Diego State head coach who has won more than anyone else in the Mountain West.

Long brought along his signature 3-3-5 defense to in his return to New Mexico (he was the Lobos’ head coach from 1998-2008). Whereas his San Diego State teams would routinely rank among the top defenses in the conference, he has not achieved those same results with the Lobos.

New Mexico’s pass defense is last, giving up 271.8 yards per game, but Lobos are in the middle of the pack against the run – 7th in the Mountain West allowing 181.83 yards per game. Notably, Wyoming sits right above the Lobos in 6th but is only giving up 128.2 rushing yards per game.

The Lobos also rank No. 10 in scoring defense, allowing their opponents to score 35.2 points per game.

Nonetheless, Fresno State offensive coordinator Ryan Grubb has the utmost respect for Long after facing the San Diego State defenses for the past three seasons. Grubb called the first matchup in 2017 “an eye opening experience.”

“That’s one thing you can guarantee is when you’re getting ready for Rocky Long, you’re going to have some long horse because there’s a lot of answers you have to have,” Grubb said. “And he’s extremely well-versed, one of the most impressive guys I ever went up against in my career.”

Grubb and Inge both declined to specifically name which players will not take the trip to Las Vegas this weekend due to COVID-19 contact tracing protocols, but it’s looking better by the day that star running back Ronnie Rivers will take the field.

Grubb provided a positive update to Rivers’ status Wednesday: “He’s not out. He’s out here working out today, so we’re hopeful that he’s going to be able to make the game. And we think he’s going to. He made a lot of progress between yesterday and today. We’re hoping for that same result over the next two days – got a lot of time until Saturday night, so we feel good he’ll be able to make the trip.”