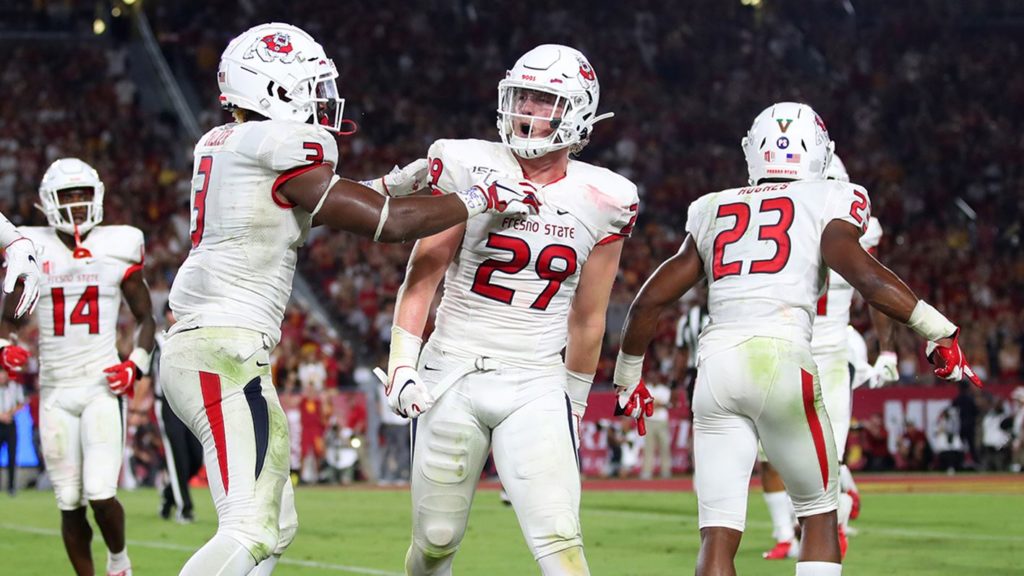 Julius Brown – or as he likes to be called, Coach Juice, – enters his first year as a Bulldog after several years on the opposing sidelines.

Brown joins Fresno State football as the recruiting coordinator and the coach of the huskiest position – a linebacker/safety combo in the ‘Dogs’ new 4-2-5 defense.

He was a defensive back for Boise State from 2000-2003 and coached for the Broncos and for Utah State, among other teams, before heading to Texas Tech last year.

Just as head coach Kalen DeBoer is figuring out how to manage his staff and team during the coronavirus pandemic, Brown heads up Fresno State’s recruiting operations without being able to bring any recruits to campus.

“I think this is what coaching’s all about, it’s the ability to adjust,” Brown said in a teleconference Wednesday. “ You look at a new staff, and guys moving their families, and you don’t have spring ball. It’s recruiting, it’s football. You just adjust, and you try to get everybody through it. The main thing is just making sure that our student-athletes are taken care of, that they’re being safe and being smart. And that’s what we really try to educate them on.

The current situation hasn’t been all bad though, especially for Brown. Usually at this time of year, he would spend the morning on the practice field, and then have a good part of the rest of his day filled up with meetings. He still has daily meetings, but now he’s able to spend much more time going after Fresno State’s top targets.

“You get a chance to recruit a lot,” Brown said. “I feel like we’ve been covering a lot of ground just talking to kids, explaining to them things that we’re all about at Fresno [State], and the response has been really good so far.”

Just like the rest of the staff, Brown has to do all his work from home. Unique to him, however, he is currently in Texas as his family is waiting for the pandemic to die down before making the move to the Valley.

Without having spring practice, sorting out his position group is certainly more challenging without having a chance to see how the players perform on the field.

“We have a little pot, and we thought we were going to add some ingredients, and you don’t really get to,” Brown said. “And honestly it’s kind of just studying the scheme and really just studying our guys. I kind of have a group there right now. We had talks of possibly moving other guys there right now.”

One of those players could be senior linebacker Aaron Mosby, who was a standout defensive back at Sanger High School.

“Mosby will tell you he definitely has the tools for it,” Brown said. “He’s lobbying for it every single day. He brings a bunch to the table. I think what you guys will see about our defense is, we’re going to be an attacking defense. We’re going to be a physical defense. Mosby’s a guy that can do a lot of things.

Back on the recruiting trail, Brown and DeBoer share the same vision for future Bulldogs: They want the most competitive players they can find.

“It’s guys that they love to compete,” Brown said. “They never back down from a challenge. That’s No. 1. And then we want kids who are smart who love to play the game. I think if a kid has those attributes, I think you can teach him the skills you want. But at the end of the day, it’s all about pride and having pride in where you’re playing. Having a belief that you are the best so you can be the best. And we want guys who want to take care of business in the classroom.”