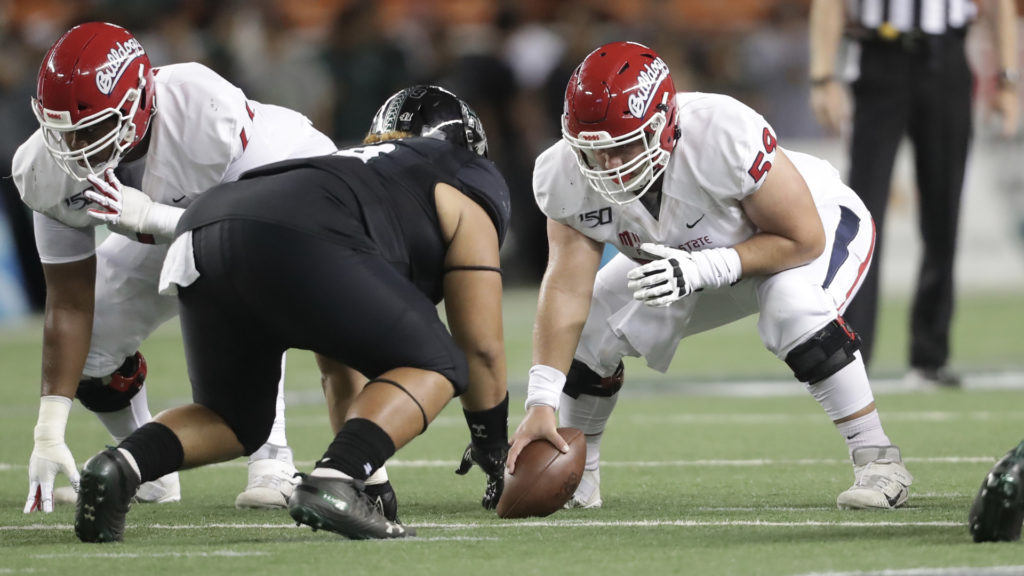 One of the most injured groups from last year’s Fresno State football team, the offensive line, could turn into a strength in the 2020 season.

Offensive line coach Roman Sapolu is one of the staff members to return as head coach Kalen DeBoer takes the reigns of the program.

“We had a really good relationship last year working hand in hand with that group,” Sapolu said. “It was good. We built some rapport that way and some trust. It feels good to know that he trusts me with this group. That’s his baby.”

Sapolu is in charge of a group that will miss former left guard Netane Muti, who declared for the NFL Draft. Although Muti was often injured, his leadership and presence in the room did not go understated.

“The program hurts a lot without having Netane Muti. We’d take him any day of the week,” Sapolu said. “I think the best thing about Netane was the type of person he was, the type of worker he was. That’s the thing I think we’ll miss the most, not necessarily the on field contributions, but the leadership, the work ethic in the weight room, the extra work really grabbing guys and taking them and bringing them around. I think that’s the thing that we’re going to miss the most. But it’s also a good thing that he laid the foundation of what it should look like.”

Looking at the 2019 season, one of the reasons the Bulldogs struggled to a 4-8 record was due to the rash of injuries along the O-line. Fresno State used 10 different starting combinations for the offensive line – the Bulldogs only played 12 games.

However, the large number of injuries allowed the younger lineman an opportunity for some playing time, which will prove to be a valuable experience moving forward.

“No matter what happens those standards should never change,” Sapolu said. “Whoever hops in there, our standard is excellence in that room, and everybody needs to play to that part. But the good thing is a lot of guys got reps and a lot of guys have experience. It’s going to be fun to see these guys compete.”

After Muti went down with an injury early in 2019, Smith filled in as a team captain and was a constant on the line, until he suffered a leg injury in Week 8. Tuitele and Woodley also started for most of the season but were unable to finish it out due to injury.

“Healthwise we’re in a good spot,” Sapolu said. “Guys are really attacking, rehabbing day-to-day, and they’re excited to get back here whenever we do get back off the road. And they’re going to be geared to go. It’s almost – you’re letting the leash off these guys, so they’re hungry dogs right now.”