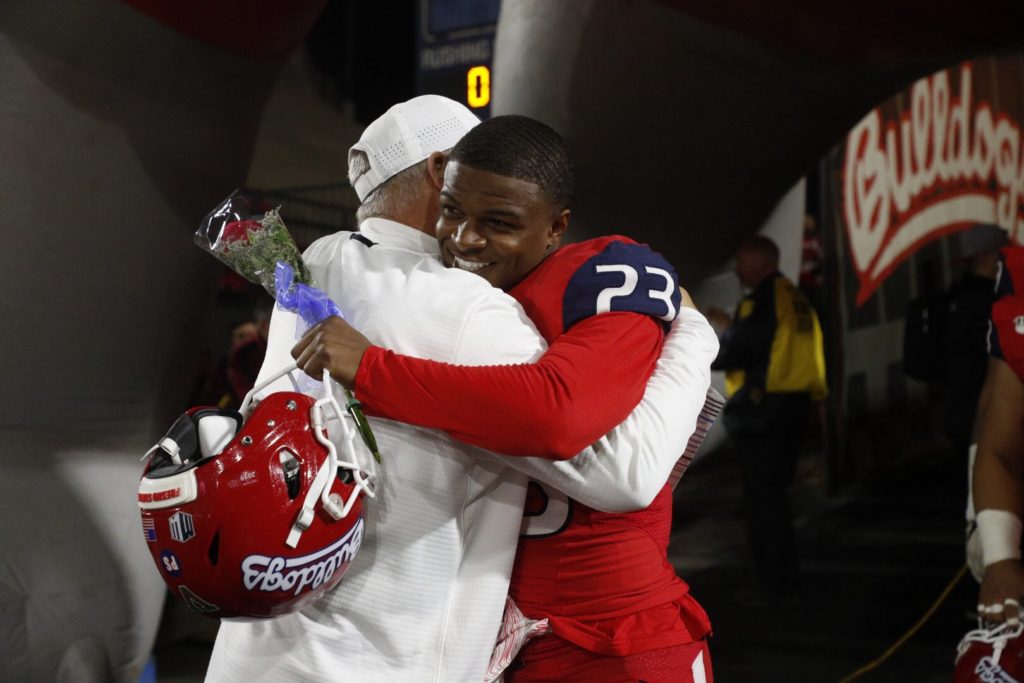 It wasn’t how the seniors wanted to finish in their last game in Bulldog Stadium. Fresno State lost to Nevada 35-28 on Saturday, dropping the ‘Dogs record to 4-7.

Last week the Bulldogs were knocked out of contention for the Mountain West Championship. This week Fresno State lost any chance at making a bowl game.

“I feel bad that we weren’t able to come away with a victory on senior night, but they’ve been a part of a lot of great times in that stadium,” head coach Jeff Tedford said. “And those are the things that they should remember. There’s been a lot of close games this year that we haven’t found a way to win, but the class and integrity that our team plays with and is all about every day is something I’m really proud of. We weren’t able to pull things out in certain games this year.”

Tied 28-28 with under two minutes remaining, the Bulldogs had a chance at the end of the fourth quarter to at least force overtime. They were backed up at their own three yard line and attempted three passes – all incompletions – and only took 15 seconds off the clock.

The Nevada return man fielded the punt around midfield and returned it to the Bulldogs’ 25, putting the Wolfpack in field goal range which effectively ended the game.

Nevada promptly ran the clock down and scored the game-winning touchdown with 12 seconds left.

“The thought process was trying to win the game, try to complete a ball, give us a little bit of space so that we could do some things there,” Tedford said. “You can look at it two ways. We could take a knee. It wouldn’t have been everything. We could’ve done that, but we were aggressive. We tried to win the game. We tried to throw the ball and make some plays to get the ball down the field, and it wasn’t successful.”

The highlight of the game came in the second quarter. Fresno State was down 14-7, and quarterback Jorge Reyna tried to scramble out of bounds but took a hard hit. He was down for a few minutes, so backup Ben Wooldridge came on in relief.

On his first play, Wooldridge attempted to throw the ball away, but he didn’t throw it deep enough. Luckily for him, wide receiver Keric Wheatfall was waiting all alone in the end zone for a touchdown.

Fresno State started strong in the second half. The ‘Dogs put together a nine-play 75-yard touchdown drive coming out of the locker room to go up 28-14.

The Bulldogs couldn’t come anywhere close to that for the rest of the game, and the Wolfpack came alive and simply made plays when it mattered, including converting all three attempts on fourth down.

Fresno State couldn’t put together a running game all night. Running backs Ronnie Rivers and Josh Hokit combined for only 52 yards. Conversely, the Wolfpack ran for 254 yards and two touchdowns.

Reyna struggled throughout the game with holding onto the ball too long, and he was sacked four times – including three times in the second half. .

Outside of that, Reyna was mostly solid – he finished with 261 yards and 3 touchdowns, but he also had an interception in the second half.

Rivers led the team in receiving with 88 yards and a touchdown, and senior tight end Jared Rice was right behind with 71 yards.

Linebacker Justin Rice once again led the team with 12 tackles. Defensive end and senior Mykal Walker had 11 tackles, 1 sack and 1.5 tackles for loss.

Fresno State still has something to play for. The Bulldogs go on the road to face off for the Valley Trophy against San Jose State next week.

No players were made available to speak to the media after the game.

“We want to make everyone proud,” Tedford said. “We want to make our fans proud. We want to make the students proud, the university proud, all the alumni proud. That’s part of what we try to get done. I think there’s one thing that no one can ever say is that our kids don’t play hard.

“There were a lot of close games this year, and they didn’t go our way. So there’s some growing pains there, but this program will not go away. There’s a lot of very young talented kids here. We’ll continue to work hard to bring the pride and tradition back. It doesn’t always go our way.”