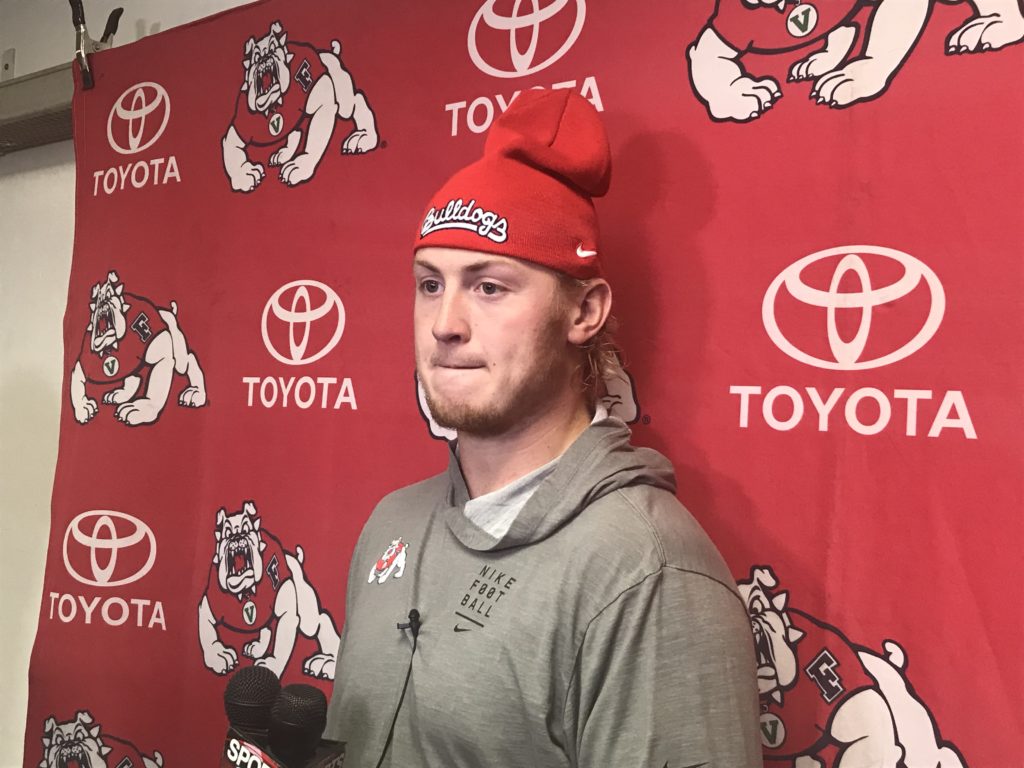 Any hopes Fresno State had of winning the West Division were squandered Friday night as the Bulldogs lost 17-7 to longtime rival San Diego State.

The Aztecs reclaimed the Old Oil Can trophy for the first time since 2016 and now have the clearest path to winning the division.

“Got beat by a better team tonight,” head coach Jeff Tedford said. “San Diego State played very very well, and we turned the football over and they executed. You’ve just got to give them a lot of credit. They played really really well on defense, and we couldn’t really get anything established in the run game and had a lot of pressure on the passer all night long. Guys played hard but just didn’t do enough to win.”

The Bulldogs struggled throughout in all phases of the game and dealt with a rash of injuries that prevented them from gaining any momentum. The offensive line, which was already down three starters, lost left tackle Alex Akingbulu early on. They also rotated between Bula Schmidt and Tyrone Sampson at center, so the unit had a difficult time finding consistency.

“It was a struggle today, no doubt,” Tedford said of the offensive line.

Unfortunately for the ‘Dogs, their injury woes weren’t contained to the offensive line. Freshman wide receiver Jalen Cropper – who is arguably the most explosive weapon on the offense – got blown up in the backfield on a fly sweep for a loss of seven yards. He left the game with a leg injury and was on crutches by the end of the night.

Tedford said the staff will evaluate Cropper’s injury once the team is back in Fresno.

The Bulldogs also started shorthanded on defense. Starting cornerback Jaron Bryant didn’t play in the first quarter. Tedford said he held Bryant out for violating a team rule, but said that it was “nothing major.”

Strong safety Juju Hughes came off the field in the first half with an injury but was able to return in the second half. He simply didn’t look healthy as the game progressed.

With or without Bryant and Hughes, it didn’t really matter. Fresno State’s defense could not keep up with San Diego State’s passing attack, which before Friday ranked as the third worst in the Mountain West.

Aztecs’ quarterback Ryan Agnew had a career night shredding the ‘Dogs for 323 yards through the air, completing 33 of 47 attempts.

To put into perspective Fresno State’s struggles defending the pass, the Aztecs haven’t had a 300-yard passer since 2014, and Agnew’s yards and completions were career-highs by a wide margin.

“I thought we did a pretty decent job in the run game for the most part,” Tedford said. “But on the corners they made a lot of plays, whether just fade balls, back shoulder balls, whatever it may be. I thought their quarterback played really well and was accurate and converted on some third downs that were really important.”

The Aztecs ran for 102 yards, but they only averaged 2.8 yards per attempt.

“We knew if we stuffed them in the run they’d get into a lot more 11 personnel, which is one tight end, a bunch of receivers,” linebacker Justin Rice said. “So once they got into that, we knew they were basically a pass-heavy team, and then they started trying to take shots over our head.”

Rice and fellow linebacker Arron Mosby led the team with 11 tackles each. Rice had 2 tackles for loss and Mosby also forced a fumble in the third quarter that the ‘Dogs recovered at their own two-yard line.

Cornerback Chris Gaston got his first interception of his career when he picked off Agnew in the first quarter.

On the other side of the ball, quarterback Jorge Reyna had his worst performance to date. With pressure constantly in his face, he struggled to the tune of 136 yards, no touchdowns and three interceptions.

“I thought Jorge competed really really hard, made some plays with his legs,” Tedford said. “We just couldn’t do enough to get it done.”

Reyna’s dual-threat ability almost spurned a comeback, but his third interception of the night in the fourth quarter put the game out of reach.

The Bulldogs struggled to convert on third down, and were 0-7 before converting their first in the third quarter. They finished 3-12, one of their worst performances of the year.

Fresno State drops to 4-6 overall and 2-4 in conference. Since the Aztecs now have five conference wins, the Bulldogs can no longer win the division and play in a third-straight Mountain West Championship game. But, with two games remaining, the Bulldogs can still fight their way to a bowl game.

“I have no doubt that our kids will compete,” Tedford said. “Our kids compete hard every single day. Sometimes it doesn’t work out our way, but I have no doubt that we’ll respond by coming back and having a good week at practice and competing for the next game. And that’s going to be the goal.”