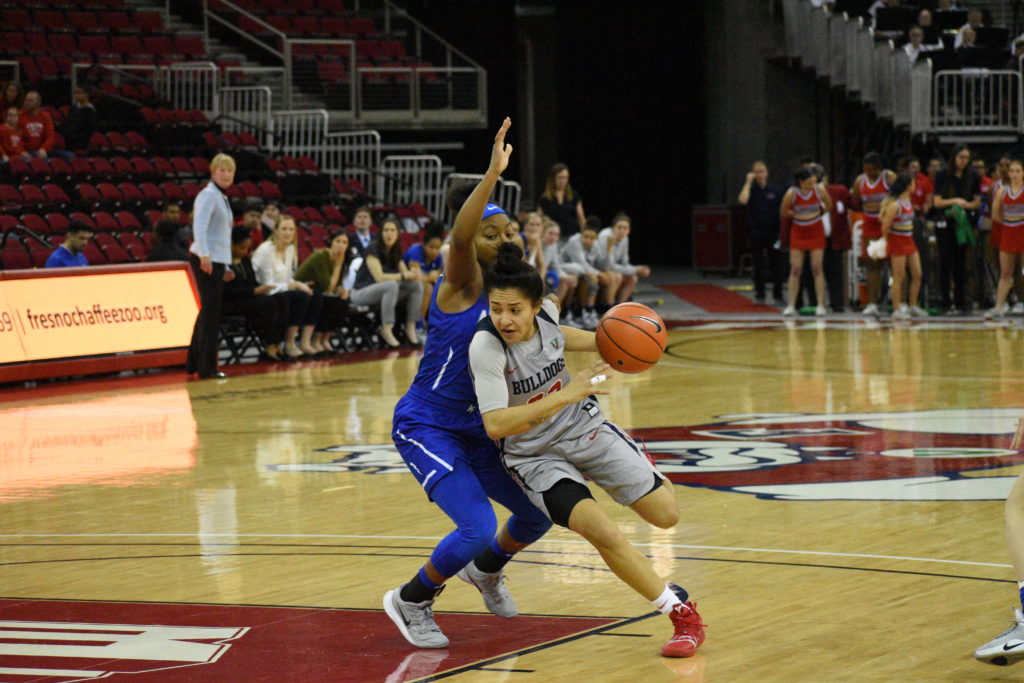 It took some resolve and determination to hold off Air Force in the 4th quarter, but the Fresno State women’s basketball team came out on top 61-52 Wednesday evening at the Save Mart Center.

“I thought we started well,” said Fresno State head coach Jaime White. “We got up, and when we get up, it seems to happen, the other team comes back. Same thing when we get down – we seem to come back.”

The Bulldogs were coming off an emotional win at Boise State last Saturday, which played into Wednesday’s game, White said.

“Hard game coming off the Boise win,” White said. “That was such a big win and hard on the road. We really did play well. We had to come back to school, and all the good stuff, but you’ve got to bang through those. I thought we had a little bit of physicality, and we fought through it, so proud of our kids for doing that.”

Fresno State jumped out to an early lead behind a strong showing from junior guard Aly Gamez. Gamez routinely drove to the hoop and found success in the paint, which became a common theme all night for the ‘Dogs, especially since they only made 2-18 attempts from beyond the arc.

After pulling away to a 29-17 lead at halftime, the Bulldogs extended their lead to 16 points midway through the third quarter, but the momentum started to shift in Air Force’s favor.

The Falcons cut the Bulldogs lead to 9 entering the fourth quarter and caught the Bulldogs in a bit of an offensive slump. Air Force caught fire and pulled within 2 with 4:19 remaining.

The Bulldogs didn’t panic after blowing the lead. Following a timeout, freshman guard Hanna Cavinder hit a corner-three to give the Bulldogs some space.

Air Force answered back with a layup by forward Riley Snyder – who led the Falcons with 16 points – but the Bulldogs beared down and didn’t allow Air Force to score for the rest of the game.

Freshman guard Haley Cavinder followed up with a layup, and the Bulldogs drew Air Force fouls the rest of the game to hit free throws and walk out with the win.

Fresno State improved to 10-0 in the Mountain West and 17-4 overall in what’s shaping out to be a special season so far.

However, the Bulldogs have a tough challenge ahead in a 2-game road trip starting Saturday at New Mexico, followed by Colorado State on Feb. 5. The Bulldogs beat both teams at home earlier in the season, 84-81 over the Lobos on Jan. 8 and 55-53 over the Rams on Jan. 22.

“I think we play well on the road,” White said. “We’ve taken a lot of pride to work hard and be ready for the games on the road, and it’s kind of fun because on the road you feel like it’s you against the world. And when you go to The Pit [New Mexico’s arena] it kind of is.

“I think we’re excited to play there. Some of our kids haven’t played there, and I think that’s kind of fun too with the young kids that we have. They don’t know what to expect, so we just go in and play our game and hopefully come out with a victory.”