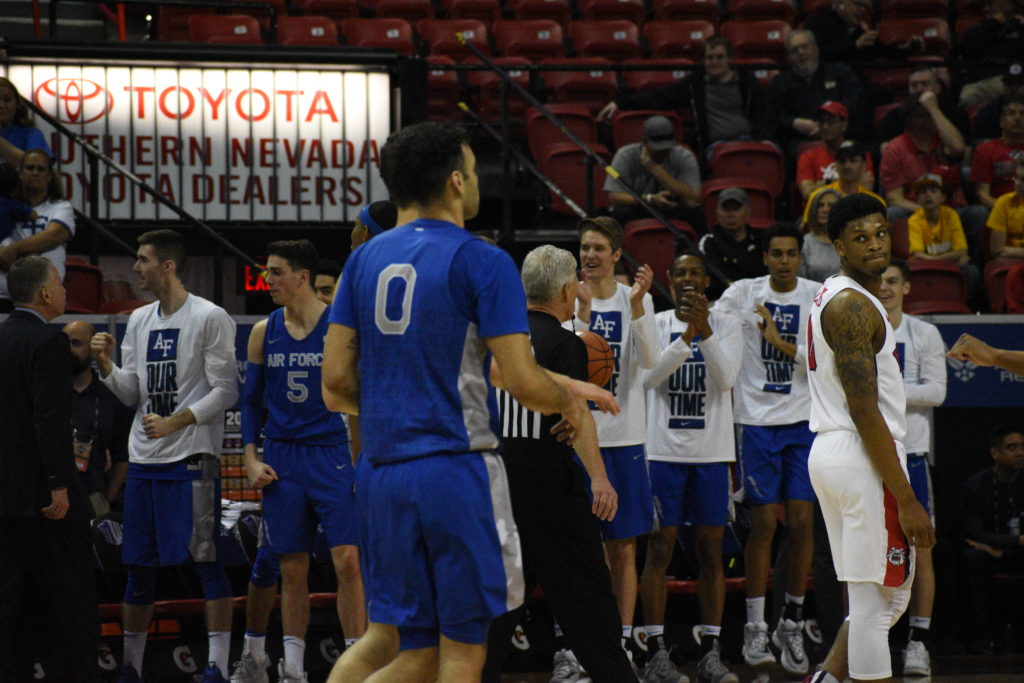 Air Force held the edge in the paint and bullied Fresno State out of the Mountain West Tournament in the first round. The Bulldogs fell 77-70 and head home from Las Vegas after just one game.

“I thought it was a hard-fought game,” said Fresno State head coach Justin Hutson. “I thought [Air Force] handled our pressure this game a lot better than they did the previous games before. And we actually tried to pressure a little bit more, and they handled it. They didn’t rattle.”

The Bulldogs entered Wednesday’s matchup as the favorites having beaten the Falcons both times they met earlier in the year, but that did not carry over into the game.

Air Force started strong and doubled up the ‘Dogs 22-11 midway through the first half, forcing them to play catch-up from there on out.

The Bulldogs didn’t fold however and eventually caught up with four and a half minutes left after Nate Grimes sunk a three to give Fresno State a one-point advantage.

But that momentum didn’t last. Air Force continued to pound the paint, feeding the ball inside, and Fresno State had no answer.

The Falcons held the advantage in the paint all game. Even though the Bulldogs held the size advantage with Grimes and freshman forward Orlando Robinson, the Falcons played a tougher, more physical brand of basketball.

That toughness carried over to the defensive end. The Bulldogs started off with poor shot selections and struggled to find any rhythm, and when they finally started making shots, Air Force didn’t allow the ‘Dogs to penetrate inside too many times. The Falcons led the ‘Dogs in points in the paint 30-10.

“That was the one thing we talked about in the locker room,” Hutson said. “When we threw the ball inside, it didn’t quite materialize. We went inside early and often. We went inside early and often in the last game in Fresno. We kind of got bumped off our lines. As we’re making moves, we’re bumped off, we’re not finishing quite well. We dropped it a little bit, and that was the story of the game.”

Fresno State played zone defense for most of the game. In the two previous matchups, Air Force struggled to find any consistency against the zone, but the Falcons had the answer in round 3.

“We were in a zone,” Hutson said. “It’s a matchup zone. We didn’t want to guard their Princeton offense with so many freshmen on the floor, and they have so many shooters out on the floor, you kind of go with the flow on who you’re going to have attention to. And once [Walker] got going, those first three, we have him a lot of attention after that. But then you have some breakdowns.”

Senior guard New Williams caught fire in the second half and made six three-pointers. Without his performance, Fresno State would not have been in the game at the end. Williams led the ‘Dogs with 21 points.

“I had it going a little bit, but I felt like I didn’t do enough,” Williams said. “I’ve got to do more, and moving forward, I’ll look at this as an OK game for me because we didn’t come out with the win. And that’s what’s most important.”

Air Force’s defense was far more effective than Fresno State’s. The Falcons had 8 steals while the Bulldogs only managed 1. Turnovers presented the same story: Air Force had 8, and the Bulldogs had 15.

The Falcons move on to face No. 1 seed San Diego State on Thursday while the Bulldogs are sent packing.