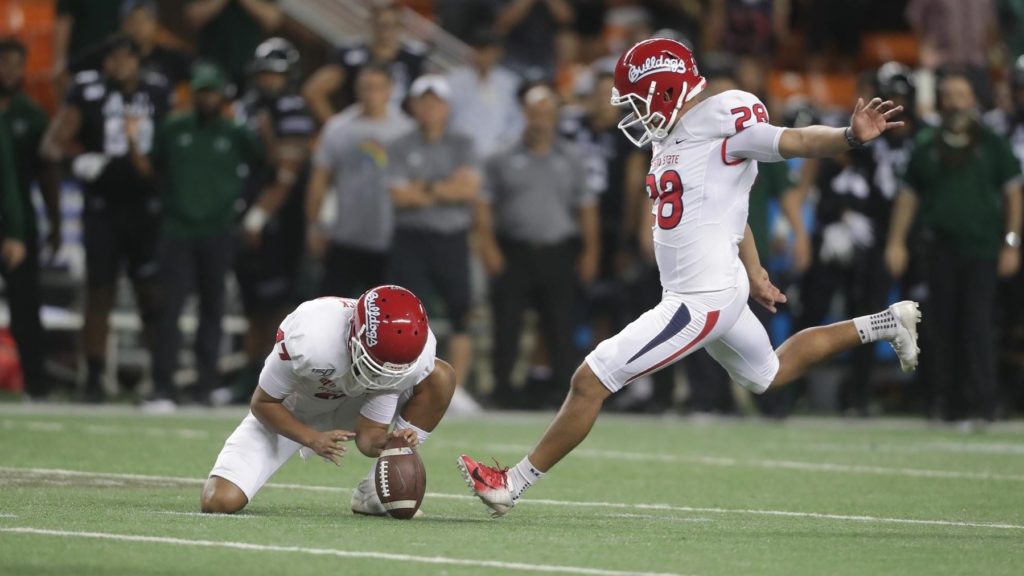 The Bulldogs managed to come back in the second half and win 41-38 in Hawaii, keeping their aspirations for a Mountain West championship alive.

Fresno State started strong, but quickly fell behind Hawaii in the second quarter as the Warriors scored 24 points to head into the locker room up 24-14. The ‘Dogs’ offense stayed consistent and the defense didn’t allow the Warriors to score again until late in the fourth.

Hawaii made it interesting though. Quarterback Cole McDonald never found his groove, so head coach Nick Rolovich brought in backup Chevan Cordeiro who lit a fire under the offense. A quick touchdown drive with a couple minutes and a successful onside kick that led to another touchdown tied the game at 38.

The two and a half minute sequence was surprising and deflating, but not completely shocking given Fresno State’s inability to finish games this year. But, with a minute left, quarterback Jorge Reyna led the ‘Dogs down field into field goal range, and kicker Cesar Silva put the ball through the uprights as time expired.

The true freshman wide receiver is a playmaker. He finally received more chances with the ball, and it paid off. His performance begs a question: Why hasn’t he had these opportunities all season?

He’s a difference maker and adds so much life to the offense. He’s the most exciting and explosive true freshman for Fresno State since Ryan Matthews in 2007.

He got things started on the ‘Dogs’ first drive with a bit of trickery on his perfectly-placed touchdown pass to wide receiver Zane Pope. He couldn’t have thrown a better pass. Even though he played some quarterback in high school, I don’t think anyone saw this coming.

Then, near the end of the first half, Cropper took a fly sweep for 53-yard touchdown, which now feels like a weekly occurrence.

His most impressive performance, however, was what he did in the receiving game. Coming into the game, Cropper only had 8 receptions for 54 yards. He caught three passes for 62 yards against the Warriors, finally showing his receiving potential. His 17-yard reception on 3rd and 14 early in the second half was critical.

They almost didn’t close it out with the near-meltdown in the last few minutes, but they pulled through after faltering earlier in the season against USC, Minnesota and Colorado State.

It was nice to see some resilience after Hawaii had gained all the momentum. It’s those moments that provide hope that this team is capable of competing for a conference championship.

Everything seemed to go against the Bulldogs, from the multiple turnover reviews that helped Hawaii out to safety Wylan Free tripping over himself which gave the Warriors an easy touchdown. Silva had a rocky-start in the kicking game, but his game-winning kick truly represented Fresno State’s resilience.

Give the defense credit for containing the No. 1 offense in the Mountain West and knocking McDonald out of the game. The Hawaii quarterback only completed 50 percent of his passes in what was his all-around worst game of the season.

Also, give Reyna credit for the game-winning drive. He kept a cool head, and it looked like he learned from his missteps earlier in the season. That drive could be a turning point for Reyna and the Bulldogs. If they end up winning the division, I bet that will be the drive that kicked it all off.

Complete, creative game for the offense

Running back Ronnie Rivers had his second-consecutive 100 yard game, the first time he’s ever done that. There’s clear momentum in the run game. Josh Hokit didn’t add to his touchdown total, but he added a much needed physical presence at perfect times throughout the game. And Cropper was the x-factor throughout the game.

Tight end Jared Rice finally made an appearance. For whatever reason, the all-conference tight end hasn’t had an impact in the passing game. But it was different this week. He had 4 receptions for 46 yards and a touchdown.

Offensive coordinator Ryan Grubb deserves credit for his playcalling. The offense was, overall, very consistent and creative. Look at what the ‘Dogs did on the game-winning drive. The call to give Rivers the ball to set up the field goal was perfect.

The ‘Dogs could’ve easily stalled when center and fill-in captain Matt Smith left the game with an injury, but they scored 27 points in the second half and got better as the game progressed.

While Reyna didn’t put up huge numbers through the air – 188 yards and 1 touchdown – he rushed for 96 yards on 9 attempts.

Everything was clicking for the Bulldogs, and it’s coming at the right time. The offense has to find a way to replicate that creativity and consistency if they want to win the division.