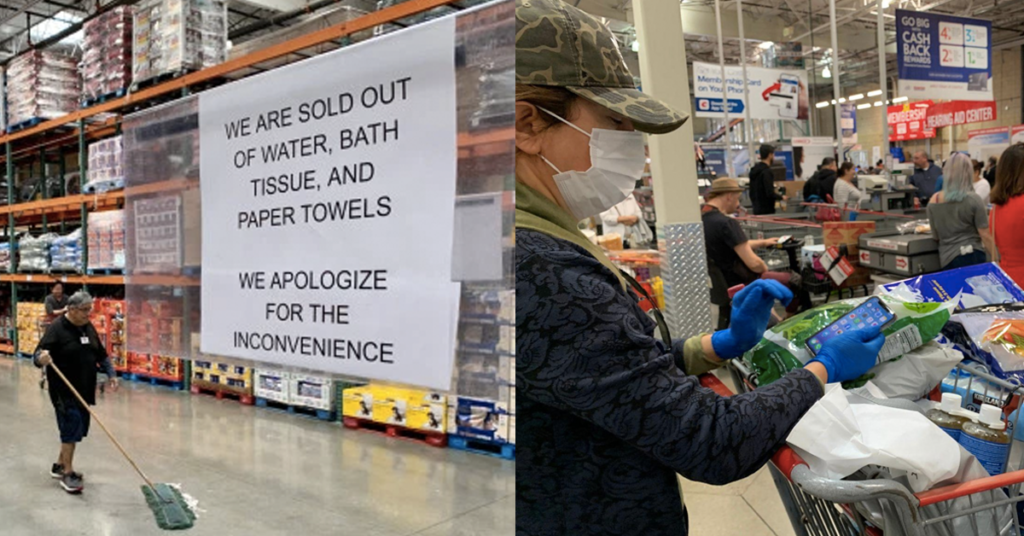 I’ll admit: I read more news than the average person.

I spend most of my evenings drafting the next morning’s edition of Sunrise AM. And even though I know what is most likely to wind up in your inbox, I still look through local and national headlines just to make sure.

This week, in particular, has dealt a heavy dose of panic over the coronavirus.

But that panic has spread far beyond the headlines of the past three weeks. It has crept into every conversation as a seed of doubt over daily life itself.

Amid other projects, I began to reconstruct how we – the media – have played a role in affecting the public psyche.

From the headlines to your neighborhood Starbucks, I’ve seen the four stages of pandemic panic.

The first stage is novelty. Starting with the commonplace name of the disease itself – and the endless beer jokes it generated – coronavirus is itself a novelty of epidemiology.

Initial headlines detailing the Chinese-born virus with a sketchy origin and voracious growth read as a health equivalent of stories on election interference or the privacy travails of the modern tech age.

Yet, like those topics, the story is captivating because – as viruses in a globalized society are prone to do – it spread geographically in a method simple enough for soundbites.

What was once a Chinese epidemic began affecting people continents away through global travel.

As new layers and complications arose, the world didn’t stop, it shifted in tectonic fashion.

The second stage is the fog of war. In National Review, esteemed columnist Victor Davis Hanson analogized coronavirus as the viral equivalent of a military combatant.

“To a popular culture that laps up creepy zombie movies, the virus certainly knows how to use its greatest weapons: fright and panic,” he writes.

But a virus in and of itself does not trade on fright or panic. Those conditions are incubated by an overwilling megaphone in the form of news media.

Work in news long enough, and patterns – no matter how short-lived – emerge.

With coronavirus arriving on the West Coast, public health department press conferences are becoming as commonplace as those held by law enforcement.

The fog of war has thickened, largely, due to patient privacy laws like HIPAA. Public health officials are often hamstrung as to how much they can reveal on initial cases of epidemics.

Locally, public health officials are in a tough spot by balancing transparency in a mission critical juncture with patient privacy.

The end result are statements that have often offered vague statements about potential exposure without releasing too much information to violate those bedrock privacy laws.

In short, they often leave plenty of room for a reader’s interpretation – or perhaps imagination.

The third stage is the run on the sundries. With imaginations running wild, it’s time to stock up.

Valley Costcos, which once featured the eighth wonder of the world – mountain ranges of Kirkland and Charmin brand toilet paper – have become ground zero for suburban survivalist shopping sprees.

Even O.J. Simpson, the defendant in the Trial of the Century, wasn’t immune from a run on America’s Costcos.

I couldn’t help but crack a joke at The Juice’s expense.

A whole pallet of items from Costco and no gloves?

Irrational buying led to Costcos nationwide instituting per customer limits on the number of cases of water and toilet paper you could purchase.

In Visalia, the rationing led to a police altercation involving an irate customer.

Yet, the run isn’t limited to the warehouse chains, either. Amazon is currently out of nearly every brand of toilet paper.

Unless you’re looking for a gag gift.

The fourth stage is institutional feedback loop. Welcome to the last 72 hours.

While the small population of highly-trained epidemiologists work round the clock to improve virus testing and treatment methods, the interlocking gears of government agencies, health care institutions, and schools have begun the slogging process of coordinating responses.

This week, I played second-hand witness to the correspondence between local school officials and state officials attempting to determine what, if anything, warrants a response.

Much like their public health brethren, institutional players are playing a balancing act: between transparency and public protection.

For educational institutions, it’s been particularly messy. Never in the internet age have schools been faced with the necessity to transition all operations online.

Yet, the momentum launched by public institutions all-too-often trickles down beyond what is needed to truly protect the public.

Small employers, taking heed from massive institutional players, have opted to send their employees home with little to no present risk.

The same goes for minor local government players, for whom absence of evidence is merely an opportunity to join the Panic-Ridden Public Relations Express.

Four stages in, where do we go? Perhaps the fifth stage may be to “flatten the panic curve.”

How? Starting with an ample dose of rationality and a moderated supply of toilet paper is a first step toward the ultimate cure to a pandemonious panic.

And if not that, a round of so-called “Quarantinis” might just be in order.