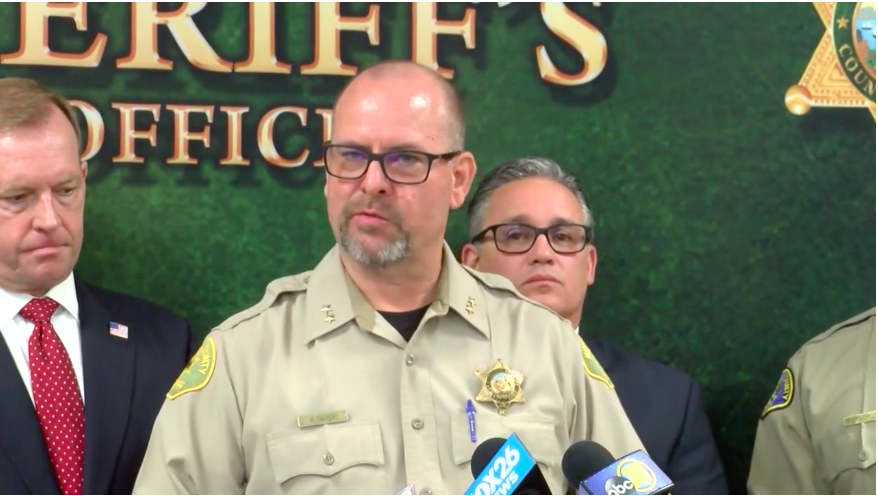 A gang sweep on Tuesday aimed at crippling a drug trafficking operation out of Pleasant Valley State Prison netted the arrest of more than 50 people connected with the Nuestra Familia prison gang and Norteño street gang.

Law enforcement officials announced the arrests were part of Operation Red Reaper, capping 10 months of work in the southern San Joaquin Valley with nearly every level of law enforcement workers.

“This operation was successful,” Kings County Assistant Sheriff Robert Thayer said. “We have dismantled to the best of our abilities the upper rankings of this structure, and we hope and pray now for a peaceful summer and months to come as we have disorganized this organization.”

The operation was an all-hands effort from the heights of the FBI and U.S. Attorney’s Office and California’s Attorney General’s office to local law enforcement, including the Sheriffs and District Attorneys of Kings and Tulare counties, and the police departments of Hanford, Lemoore, Corcoran, and Avenal.

The investigation began in September 2018, Thayer said, and the agencies concentrated and ramped up their efforts in January.

In the 10-month period, 96 people were arrested and 74 firearms were seized, including 14 fully automatic firearms.

One Tuesday, more than 50 search and arrest warrants were executed in Kings, Tulare, Fresno and Kern Counties, Thayer said.

Tulare County Sheriff Mike Boudreaux said that they executed 21 search warrants in his county and 1,000 rounds of ammunition were confiscated.

“Our desire truly is to make our communities as safe as we possibly can, and I think we’ve done a great job in doing so with this operation,” Boudreaux said. “But this isn’t over by any means. There is much to be done, and there will always be much to be done. Gangs are not going to go away. But we have to be vigilant in that fight.”

United States Attorney McGregor Scott said this is the second prison gang in two weeks to have its leadership charged following an investigation into the Aryan Brotherhood at Folsom State Prison.

“I can’t help but think as I stand here today that were [former] Attorney General [Jeff] Sessions here with us, he could not be more proud of what this team represents and the accomplishments that have been carried out over the last several weeks to reduce drug trafficking and violent crime in Kings and Tulare Counties,” Scott said. “It’s a great day for us in law enforcement.”

This is the third time in the last decade law enforcement has come together as a team to take out Nuestra Familia in Kings County, Scott said.

“I can assure you, if we have to come back a fourth time, we will,” Scott said.

Sean Ragan, the FBI Special Agent in charge of the Sacramento Field Office, said they brought in about 200 FBI personnel to the area for Tuesday’s operation.

A total of 21 individuals have been charged in federal court, and they will be arraigned in the coming days at the federal courthouse in Fresno, Scott said.

“I want every gang member to hear the law enforcement here locally in Tulare and Kings County, Fresno County, the Central San Joaquin Valley – we will be coming after you,” Boudreaux said. “And we want you to know that we take this seriously, and we take our communities seriously. And the good that we see in uniform is what we will utilize and use to make sure that our families, our churches, our parks and our communities are safe.”