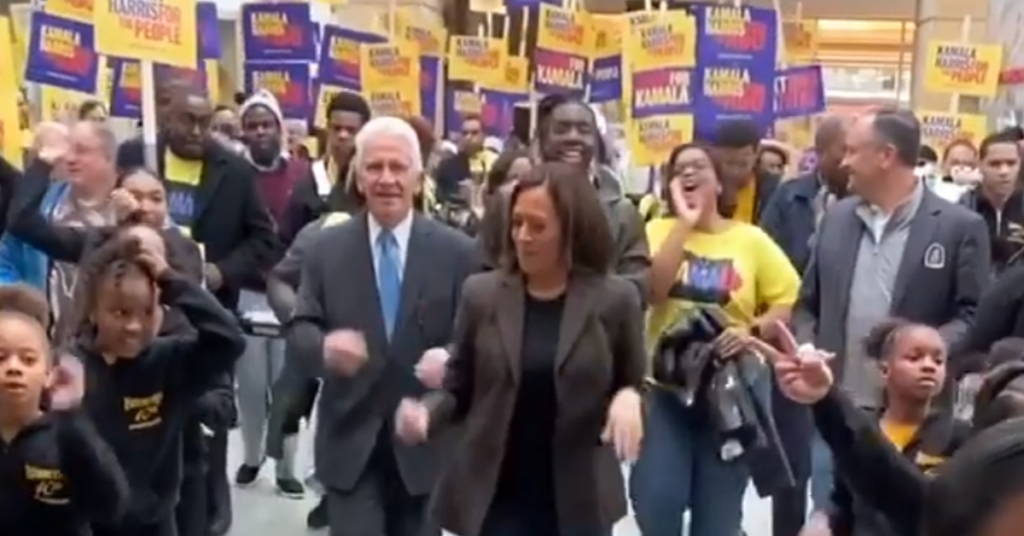 As California’s Sen. Kamala Harris headed for the Iowa Liberty and Justice dinner this weekend, she was accompanied by a cacophonous ensemble from the Des Moines-based Isiserettes drum corps and one other notable guest.

In a bevy of videos published by Harris’ camp, Costa is seen marching in tow with Harris through the streets of Des Moines toward Wells Fargo Arena for the Democratic cattle call event.

The video gave commenters on the left and right an opportunity to knock Harris’ tenure as San Francisco’s District Attorney. On the campaign trail, Harris has been on the receiving end of criticism for, among other things, her handling of school truancy cases that led to jailing parents.

Kamala marching the kids to foster homes after imprisoning their parents for truancy. pic.twitter.com/QshvqCFAMp

Others criticized the junior senator for poor optics in the midst of California’s devastating wildfire season and rolling public safety blackouts hitting the Bay Area and Southern California.

And she’s too busy dancing in Iowa to care

Families are still struggling because of water, immigration and education challenges in the Valley… yet Costa is wasting time enjoying himself and playing politics in Iowa. Wonder why nothing here has ever changed…. pic.twitter.com/9P7oKDtuac

Costa is one of five members of the California House delegation to endorse Harris.

Harris, meanwhile, is among a bevy of California Democratic heavy-hitters to have endorsed Costa for what is shaping up to be a unique re-election in 2020.

For the first time since he joined the House, Costa is facing a primary challenge from Democrats – Fresno City Councilwoman Esmeralda Soria and Kim Williams of Merced.

Earlier in the week, Harris announced a major shakeup in her campaign apparatus – laying off staffers and closing three offices in New Hampshire – turning her focus exclusively onto Iowa.

Recent polling could suggest why.

The RealClearPolitics polling average has Harris sitting in fifth place nationwide, at 3.9 percent. In Iowa, she averages in sixth place with 3 percent support.