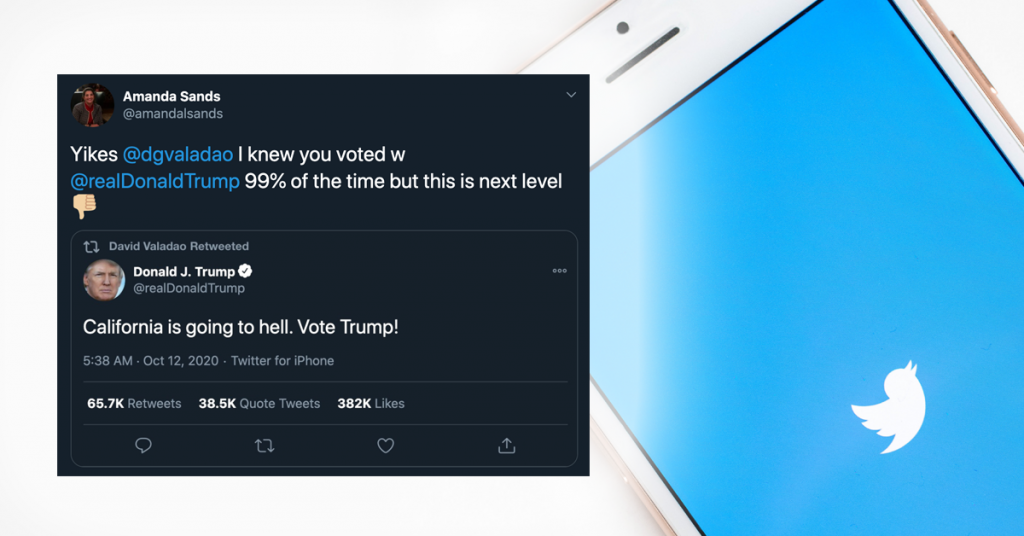 A late-night row between the top campaign staffer for Rep. TJ Cox (D–Fresno) and officials with the National Republican Congressional Committee over a fabricated tweet raised questions about misinformation on the social media platform.

It began Monday night when Amanda Sands, Cox’s campaign manager, tweeted out a purported screenshot of a tweet sent by President Donald Trump reading “California is going to Hell. Vote Trump!” which featured a notation that Cox’s opponent and predecessor, former Rep. David Valadao (R–Hanford), had retweeted it.

Valadao did no such thing, his campaign and D.C.-based GOP operatives quickly asserted.

There was a small problem: the image was missing Valadao’s middle initial “G” in the retweet segment.

Sands quickly came clean that her “Photoshop skills leave something to be desired” after NRCC spokeswoman Torunn Sinclair called for the tweet to be deleted and reported for abuse.

“TJ Cox has spent almost the entire campaign misleading voters about his unpaid taxes and lying about David’s record, so it isn’t surprising that his top staffer knowingly fabricated a tweet in David’s name in a deliberate attempt to mislead voters,” Valadao campaign manager Andrew Renteria told KGET in Bakersfield.

“This is a clear indication of the extent T.J. Cox and his aides will go to in order to win in November. The Central Valley has had enough of T.J.’s failed leadership and lies.”

The back-and-forth between Sands and NRCC staffers, however, raised questions about Twitter’s policies regulating political speech for misinformation.

The company again applied the label to another Trump tweet in mid-September. The tweet contained a video of Vice President Joe Biden’s famous “Despacito” moment with the audio switched to N.W.A.’s “F*ck Tha Police.”

Reached for comment on Tuesday about manipulated media in the Cox-Valadao incident, Twitter spokeswoman Elizabeth Busby said the tweet from Sands was not in violation of Twitter’s rules and referred The Sun to the company’s manipulated media policy.

One of the guidelines in determining harm is voter suppression or intimidation.