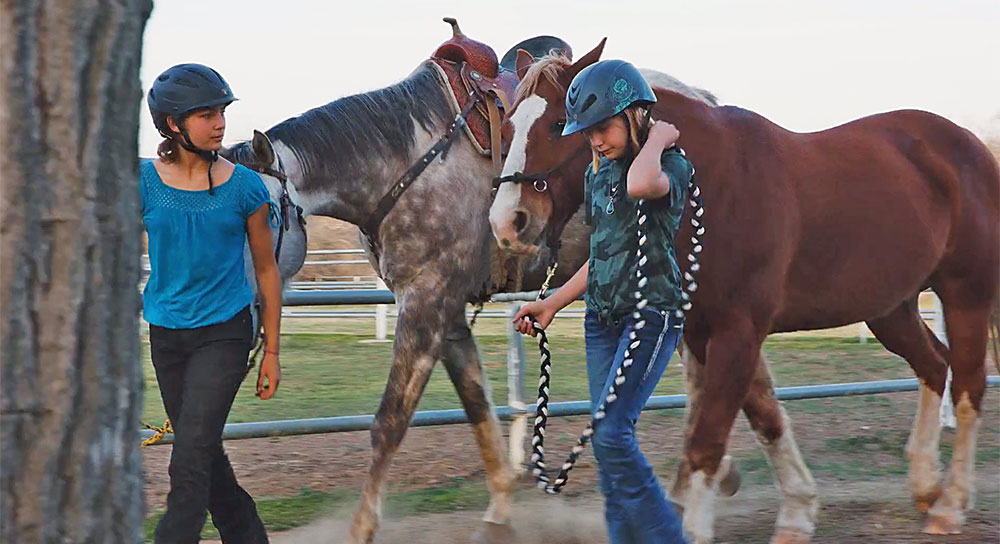 The 3-minute drive across the family’s 400-acre horse ranch was the longest in Nicole Ainger’s life. She heard fear and panic in the phone call telling her to come fast. When she pulled her truck up beside the training barn, she found her trainer Earl on the ground cradling her 10-year-old daughter Ashlyn’s blood-covered head.

“Earl was crying and telling her to stay with him. He was calling out to Jesus, ‘Please dear God. We need a miracle,’” describes Ainger.

Ainger feels like she got a series of miracles over the next few hours, from how fast the ambulance arrived to having a surgical team assembled and waiting for Ashlyn at the region’s only Level 1 trauma center.

During the 8 minutes they waited for the ambulance to arrive, Ashlyn’s grandmother and father came from other parts of the ranch to sit by Ashlyn’s side. “We didn’t know in those moments what was happening and if we might be saying goodbye,” Ainger says.

Ainger remembers a terrifying ambulance ride down Highway 180 from their Sanger ranch, lights and sirens blaring as they blew through stoplights and Ashlyn slipped in and out of consciousness. “I looked at the medic in the ambulance with tears and said, ‘Please tell me something good.’”

Ainger continues, “He told me, ‘Well, she has a good pulse and she has a good blood pressure and when you ask her to respond, she is. And she’s moving her feet and her toes.’”

Nicole asked if they should be heading to the children’s hospital. “The guys in the ambulance said, ‘No, trauma is trauma and the best place to take her is Community Regional downtown.’”

Community Regional Medical Center is one of only 13 Level 1 trauma centers in California and the only one between Los Angeles and Sacramento. Serving a 15,000-square-mile region, the Table Mountain Rancheria Trauma Center has specialists in brain, heart, trauma and other surgeries available 24/7. Injuries caused by falls comprise a third of the more than 4,200 trauma patients the hospital treated last year.

Studies have shown that access to Level 1 trauma care, like that provided at Community Regional, not only significantly increases a severely injured person’s likelihood of survival, but also improves the likelihood of a good recovery. And those within an hour of a trauma center have a 25% greater chance of survival from critical injuries.

With no traffic and lights blaring, Ashlyn made it to the trauma center in under 15 minutes, Nicole says.

“When we came through the double doors they were waiting for her in their blue (protective) suits. They just swarmed,” describes Ainger. She remembers a blur of explanations and signing to give permission for Ashlyn to receive blood if she needed it. Then her little girl was taken away to get a CT scan.

Neurosurgeon Nicholas Levine describes what Ashlyn’s CT scan showed: “She had a skull fracture which depressed into the dura (outermost brain membrane) which lacerated the covering of the brain and then went into the brain itself. So it was more than a concussion.”

After consulting with an oral maxillofacial surgery colleague, Dr. Levine got to work lifting the bone fragments off of Ashlyn’s brain, stopping the bleeding and reconstructing her skull, patching it together with tiny metal plates.

Ashlyn was “exceedingly lucky,” says Dr. Levine. “It did not affect her eye at all. We were able to reconstruct so that she would look normal … She had very minimal brain injury. She did have a bruise (of the brain) that I was able to take out. It was superficial, so it really should not have an effect on her long-term personality, thinking or performance.”

Ainger says she was calmed by the physician’s assistant who described what was going on with her daughter. “He came in to explain to me all the things that were going to happen and that could happen with brain surgery — which was terrifying to hear as a mother,” she says. “He was telling me all the risks and then he said, ‘On a scale of 1 to 10 this is probably like a 2 in difficulty for Dr. Levine.’ He said, ‘You got one of the best around who happens to be working on your daughter today.’ That was good to hear.”

Ainger counts that as another one of the small miracles that made a difference for Ashlyn.

Dr. Levine agrees. “We were in the OR within a half hour of being called. That is exceedingly quick.” He adds that the trauma team aims to get such patients into surgery within an hour.

A decade of investment in neurosurgery resources

Ainger is grateful too for the ambulance crew that knew the best place for Ashlyn: “I believe had she not gone there (to Community Regional) it would be another story. The time frame, the efficiency, how fast she got into surgery and how fast Dr. Levine was able to stop the bleed played a big part in how fast she was able to recover.”

Having the right equipment, nursing team and post-operative hospital care also make a difference. “We’re very fortunate in that the hospital has a neurosurgical operating room, neurosurgery nurses and team,” says Dr. Levine. “Most hospitals have cardiac nurse teams and regular OR teams. But we have our own neurosurgery team. So, we’re prepared for everything, and I think we’re very fortunate now that we also do pediatric cases at Community.”

Over the past decade Community has committed the resources to more than triple the number of neurosurgeons from 3 to 11 and open a 20-bed neuro intensive care unit — the first in the region. Community also increased surgical staff by 80% and added four more operating suites to support a surge in patients, many of them transferred from other hospitals for a higher level of care.

Grateful to have Ashlyn back on her horse

Just before Ashlyn went into surgery, Ainger begged staff to bend rules so she could see her, in case it was the last time. “I asked and they gave me 30 seconds to go pray over her before she went into surgery. I prayed for the doctors and for God to guide the hands that were going to touch her.”

Then she waited. “I was literally sick to my stomach. I was afraid of losing her. As soon as Dr. Levine came out of surgery he started talking about her scars and how she was going to have a little one. I said, ‘Wait a minute! Does that mean she’s going to be okay?’ I wasn’t worried about a scar. I was just praying she would be alive.”

The only mark of Ashlyn’s fall is a 2 ½-inch crescent-shaped scar on her forehead. Two months after her brain surgery she’s back to doing everything she did before — except she has trouble raising her right eyebrow. She’s returning to school and back on her saddle.

“Riding horses is something I basically do every day,” says Ashlyn, who is an accomplished barrel racer and began riding horses on her own at age 5. She says she’d be “a mess” without her horses. “This is what I love. This is my happy place. I’m feeling better now that I can ride a horse.”

There is one difference to her riding. Now, Ashlyn always grabs her helmet first. “There will never be another kid on a horse without a helmet in my eyesight,” says Ainger. “And Ashlyn will also be a helmet advocate from now on.”

The children who come to the family’s Sanger horse ranch for riding lessons now have stickers for their helmets that read “I wear this for Ashlyn.”

Ainger says, “I’m just so thankful for everyone who was put in our path that day. We believe she’s a miracle, but we also believe God worked through the hands of the doctors and the nurses.”