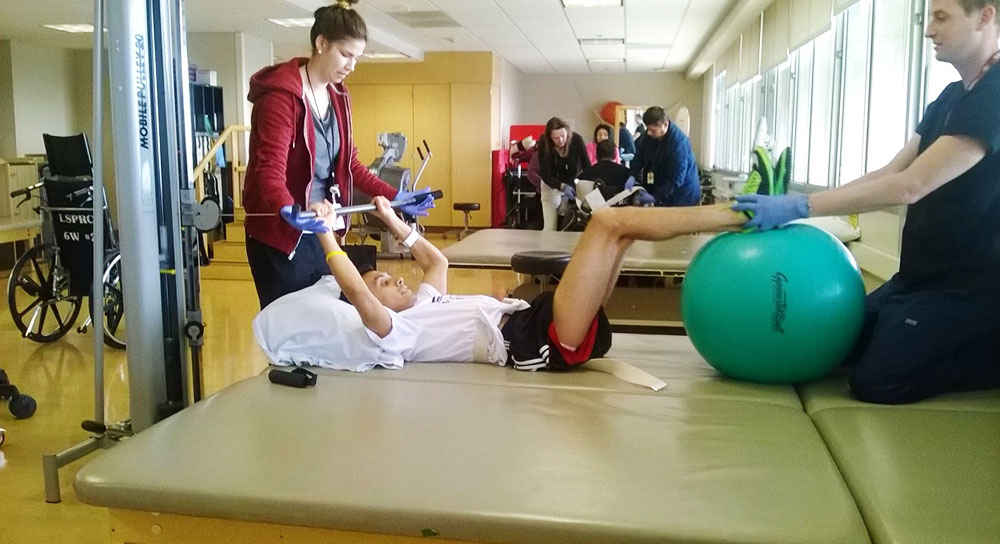 The first word he spoke after waking from a coma was “Dad.”

Dominic “Nick” Burriel Sr. had been sitting by his son Nick Burriel Jr.’s hospital bed for 22 days waiting for a sign his son might heal from an assault that stopped his heart and cut off oxygen to his brain in late 2013. The then 23-year-old woke from his coma unable to form words, see or walk.

It took more than a year of intensive therapy at Community Regional Medical Center and at the Bakersfield Centre for Neuro Skills, but Nick Jr. is now running half-marathon races, working with his church youth group and speaking about his experience as a trauma survivor.

At the end of March, Nick Jr. was honored by the California Speech Language Hearing Association with the “Consumer of the Year” for his work in telling his story and in encouraging Fresno State students studying speech language pathology. He’s also been asked to speak at the American Trauma Society’s virtual, national conference in April.

“He’s my firstborn son, I’ve always been proud of him. But for him to have the opportunity to speak on his own, with his own voice, it’s an incredible blessing,” says Nick Sr. remembering days at the hospital that he wished for just one clear word. “I think God has a plan for Nick. And God has put people in place to help him so that he is able to use his voice and learn again and use the mind he was blessed with.”

The grateful father counts key people as the Level 1 trauma team that helped bring Nick back from the brink of death, Community Regional’s Leon S. Peters Rehabilitation team and the first paramedic on the scene that winter night when Nick crossed paths with the wrong guy. The father still chokes up talking about Nov. 16, 2013, when they got a frantic call from a friend saying Nick was dead.

“We received a call from a friend who found Nick lying on the pavement,” his father describes. “I just remember getting in the car and driving as fast as I could (to the hospital) … One of his best friends was the EMT who arrived first and she didn’t give up. I can just imagine her tears staining his chest, not allowing him to die. She just kept working on him. And finally there was a glimmer of hope with a pulse.”

Nick Jr. doesn’t remember much about that November night. He was home from the University of San Francisco, where he played soccer, and had gone to a local bar to hang out with his girlfriend when he tangled with a stranger. A fight broke out in the bar and security escorted both men out. Witnesses offered differing accounts of a second fight that erupted in the parking lot and caused Nick Jr. to hit his head on the pavement.

“My assault caused me to flatline for 25 minutes,” Nick Jr. says. “They gave me a 30% chance and by the grace of God I pulled through it … I had to learn to walk and talk all over again.”

He suffered an anoxic brain injury from oxygen being completely cut off for so long. His head hit the pavement on the left side, Nick Jr. says. That side of the brain controls language and speech and plays a big role in interpreting visual information.

Lucky for the Burriel family, Nick Jr. was just minutes from the Level 1 trauma center at Community Regional with 24/7 neurologists and surgeons and a team of therapists to help with recovery. The Leon S. Peters Rehabilitation Center is located a few floors above the emergency room where Nick arrived. It provides 24-hour nursing along with physical, occupational, recreational and speech-language therapy.

Courtney Young, an acute care speech language pathologist at Community Regional, is among the first people to see trauma patients after they’ve been stabilized or awakened from a coma. “We have a big role in assessing and treating cognition, so we do see most of the trauma patients, especially if they’ve had any loss of consciousness, even momentary,” Young explains. “The trauma team trusts us to assess patients and identify any deficits.”

She explains that speech-language therapy is about a lot more than speech: “We work on swallowing and getting patients eating and drinking again. We also work a lot with cognition and how a patient remembers things, pays attention, comes up with language, gets the words out, organizes their thoughts, their problem solving, things like that.”

Most trauma patients have some loss of consciousness that causes a traumatic brain injury with symptoms ranging from a mild concussion to being unable to swallow or speak, says Young.

Nick Jr. needed help with everything. “I was 100% disabled. I had to have help cleaning myself, feeding myself, dressing myself, all aspects of life. I had a bad case of aphasia (being unable to access words). I would just zone off. I had to learn everything — colors, shapes. But my speech therapist Tracy used Uno cards to help with getting my colors and shapes better.”

While Young’s job is early assessment, other therapists take over with intense 45-minute sessions to help patients relearn the art of talking.

The father remembers therapists asking Nick Jr. to repeatedly lift his tongue and move it side to side. “We take it for granted that our tongues are going to move to allow us to speak. Nick had to relearn that. I remember they wanted him to lick a spoon to generate that muscle memory,” Nick Sr. says of how therapists patiently took his son step-by-step through that relearning process. “I can’t give them enough accolades.”

Determination and faith was key to finding his voice

What got Nick Jr. through difficult weeks of therapy, he says, was his faith and the support of family and friends who came every day to the hospital. “I never lost my drive to be better. I never lost my work ethic. That’s a big key to my recovery,” he says.

Encouragement from caring therapists also made a huge difference. “Without them and their love for their jobs, I wouldn’t be here talking to you,” Nick Jr. says. “Throughout my journey all the people I encountered loved their job and that was key. And it was my job to try with my full effort to do everything they asked.”

Now he easily gets on Zoom meetings to encourage others who are struggling. He speaks about his faith journey with teens at church. And he’s a regular speaker at Fresno State’s health classes. He’s honored that the California Speech Language Hearing Association recognizes how far he’s come and how much in turn he’s working to give back.