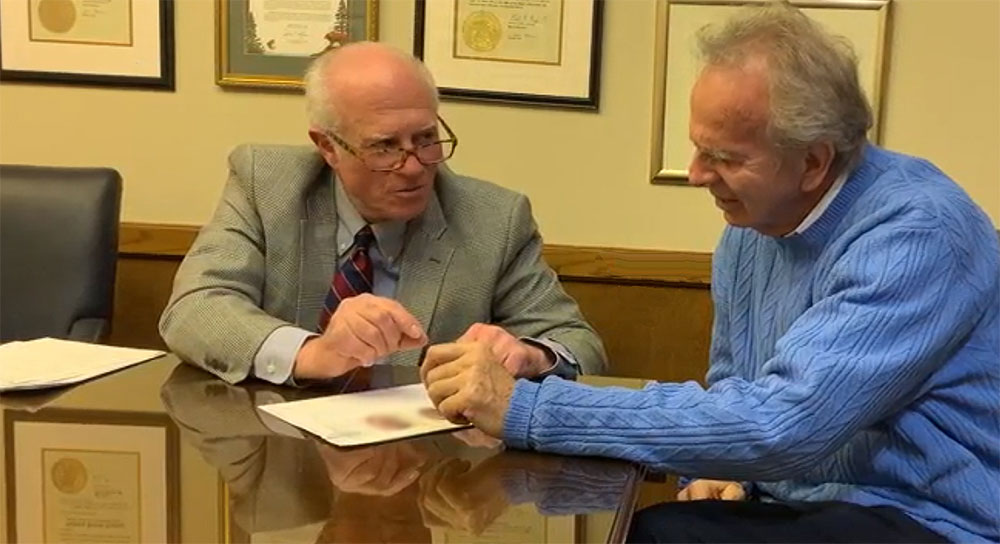 Arteriovenous malformation, or AVM, is an abnormal cluster of blood vessels that can cause life-threatening symptoms. Normally, arteries take oxygen-rich blood from the heart to nourish the rest of the body. Veins then take that oxygen-depleted blood back from organs to the lungs and heart.

When arteries and veins merge before they reach crucial parts of the body, it disrupts normal blood flow and oxygen and nutrient circulation. This complex jumble of blood vessels causes high pressures, increasing the risk that blood vessels will weaken and rupture. One of the first signs of AVM often is bleeding or a swelling in the tissues around the tangle.

For Tony Capozzi, it was swelling and bloating that caused him concern and pain.

“He came into the office and had this large mass on his abdomen that felt like cancer,” describes Dr. John Garry, who was puzzled because he had just done a routine colonoscopy two and a half months before and found no signs of anything wrong other than a few slightly swollen blood vessels. “He looked sick, so I took him to the ER at Community Regional Medical Center and had a CT scan done and lab work.”

Lab work came out normal, but the CT scan showed an odd mass in the lower abdomen and upper pelvic region on the left side.

“I did another limited colonoscopy and it was completely different than it had been in June,” Dr. Garry explains. “The wall of the colon was very engorged … It looked like a spider web. Normally you would see (a colon) that looks like a straight tube with air in the center of it.”

An angiogram done by vascular and interventional radiologist Chandra Venugopal filled in the picture. A dye that would show up on X-ray was injected into all the blood vessels that supply the gastrointestinal system so they could map how blood was flowing. It clearly showed arteries and veins merging in a maze surrounding a part of the colon.

“As soon as we injected the dye, it went from the artery and then directly into the veins …This is very abnormal and was concerning,” he describes.

Stanford experts send patient with rare condition back to Fresno

In 30-plus years of colon and rectal surgery, Dr. Garry had never quite seen anything like it. He called longtime radiology colleagues to take another look at CT scans of his patient. They used angiography to map out the tangle of blood vessels surrounding the lower part of the colon, likely the source of a swollen area causing problems and pain.

Through the mapping, the physicians could see that arteries and veins were merging, a malformation that shouldn’t happen. Dr. Venugopal suggested they send scans up to Stanford Health Care to their experts at the Arteriovenous Malformation Clinic, which specializes in such blood vessel defects.

Capozzi was grateful to have the Stanford experts refer him back to his longtime doctor for the procedure. After a complicated surgery and an 11-day recovery in the hospital, he advises others: “If you don’t think the doctors in Fresno can take care of it, think twice about it. Because they can. And the treatment you get here at the Community Regional Medical Center is great.”

Community’s more than 40-year partnership with one of the nation’s top-rated medical schools, UC San Francisco, attracts top doctors and the latest treatments to the Valley. The faculty helping train the 300 UCSF Fresno medical residents engage in a broad spectrum of research to address critical health issues in the Valley and increase access to care.

Dr. Garry, an assistant clinical professor in surgery at UCSF Fresno, put together a team of longtime colleagues for Capozzi’s complex surgery. He knew he would need a skilled vascular radiologist like Dr. Venugopal to map the disordered area with an angiogram right before surgery. He reached out to trauma surgeon Lawrence Sue, also an assistant clinical professor at UCSF Fresno, to assist in surgery. And their chief surgical resident, Nicole Takeda, worked by their side.

“I really have to thank my colleagues for their expertise and their collaboration,” says Dr. Garry. “These are people that I would choose to take care of me personally, or any of my family members.”

Without surgery Dr. Garry worried his patient could have heart failure, or serious internal bleeding.

Capozzi jokes that he’s 35 lbs. lighter after his surgery. “I went in for what I thought would be a 2-hour surgery and when I finally woke up, Dr. Garry came in and said, ‘Well it took 9 ½ hours and it went well.’”

During recovery, Capozzi says he had “tubes everywhere” but he learned to be patient about his recovery, and each day he felt better and better. “I have to say, after the surgery the pain was gone, and I’m back in my law office dealing with issues and helping people.”

Dr. Garry visited his longtime patient in his law office and declared him “immensely better than he ever was in the last five years.” He believes the AVM was an inherited condition that started forming at birth and may have been causing subtle problems for decades. He reassured Capozzi the AVM is unlikely to come back.

Grateful for expertise and attentive care

He was surprised at his nurses’ insistence that he get up and walk around so soon after surgery. But during those frequent hallway walks, he got to know those caregivers while they exchanged stories about their families. “I would walk around that hallway 4 or 5 times. And they would walk with me, holding me under my arm and carrying the intravenous bottles for me, and stop and chat with me. It was really helpful in making me feel better.”

Capozzi heard patients around him asking eagerly to be discharged. He says he made sure to let his nurses know he felt differently: “I said, ‘Well, I want to go home too, but I feel so good the way you are treating me I would rather stay here until I’m really good enough to go home.’”

And when he was discharged, he came back to say a formal thank you to all his caregivers with a special Honor Your Care Hero donation and ceremony. “These people are in a very difficult job and they’re trying to save lives … they do work that I don’t think others could possibly do and they do it with vigor and a happy attitude, and are always willing to help and asking if you need anything more,” says Capozzi. “I just can’t be more appreciative.”

He now tells friends who need surgery: “Stay here. If you go up to Stanford or somewhere else you’re away from home, you’re going to have to get a hotel room, your family’s not going to be able to see you. It’s so much better to be here in Fresno. They have the expertise and the personnel to take care of you. I’m a prime example about that.”