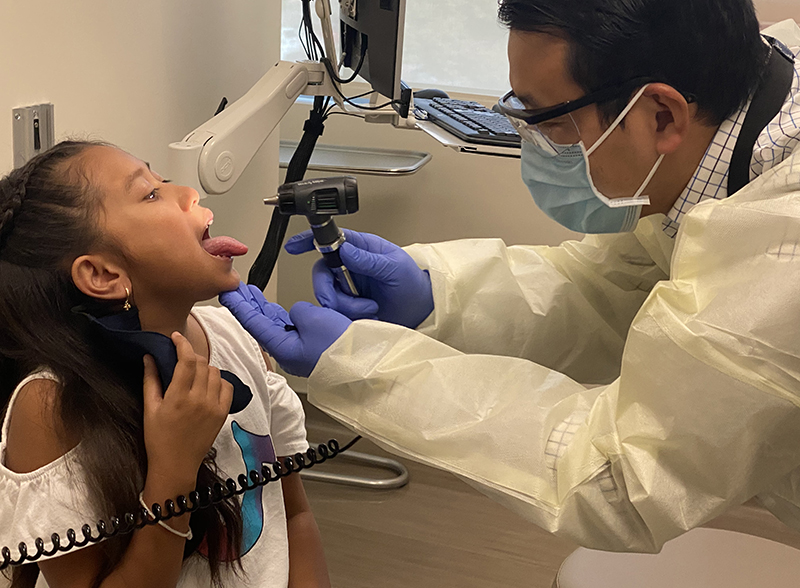 Kailee Sidamrong-Phan was a tiny, sickly baby that her parents rushed to Valley Children’s Hospital frequently for breathing troubles first diagnosed as asthma. At age 2 ½, a test to measure the concentration of salt in her sweat showed Kailee likely had cystic fibrosis – something newborn genetic screening had not picked up.

“We were heartbroken and a little confused,” said her dad, Sok Phan. So were her doctors.

She’s a unique and rare case, explained Dr. John Moua, the pediatric pulmonologist who first diagnosed her: “She didn’t fit the regular profile of a cystic fibrosis patient… a blonde, blue-eyed kid that’s very small and malnourished. She’s Asian and she doesn’t have any of the mutations on her genes, yet she has the positive sweat test. That’s Kailee.”

Cystic fibrosis is a genetic disorder that thickens all the secretions in the body, making it difficult to digest food, creating gummed up lungs and often affecting other organs. Kailee sees a whole team of specialists – respiratory therapists, nutritionists, pulmonologists, gastroenterologists and social workers – during checkups.

The team care approach is typical at the UCSF Fresno Cystic Fibrosis Program at Community Regional Medical Center even if Kailee’s case is not. As the only cystic fibrosis care center between Sacramento and Los Angeles accredited to take care of both children and adults, the program does newborn screening and treats patients from birth throughout their lives.

“I’m blessed to have the colleagues that are not just smart, intelligent, compassionate physicians, but also physicians that will collaborate,” said Dr. Moua. “That’s the beauty of what we have here. There’s a cardiologist that sits in the same room as a pulmonologist and just down the hall you have a geneticist and in the other room is an endocrinologist and at the end of the hall are the G-I doctors and neurologists. For the complex cases you really want to have that multi-disciplinary coordination and care. Kailee is definitely really a complex case.”

For local children like Kailee, it’s difficult to find a specialist and even more challenging to get a timely appointment or get all the different specialists to coordinate care. “The catchment area for our hospital has over a million children, so we see quite a few cystic fibrosis patients,” said Dr. Moua. “In the Valley there’s a huge disparity in not having enough doctors or specialists for them.”

The challenges finding the right care can be exacerbated by having Medi-Cal or no insurance at all. More than 16,000 children in Fresno, Madera, Tulare, Kings and Kern counties are enrolled in California Children’s Services because of their financial needs and chronic disabling medical conditions such as cystic fibrosis, cancer, diabetes, cerebral palsy, birth defects or conditions that arose from a premature birth. Statewide, more than a third of families who have children with special healthcare needs report difficulty accessing pediatric subspecialty care.

Community and UCSF Fresno’s strong partnership provides those local children with increased access to specialists not only in the Community Regional clinic, but via telemedicine, which connects them to additional subspecialists and UCSF pediatric faculty members who have been practicing at top-ranked UCSF Benioff Children’s Hospital campuses.

The ready access to a team of experts has been key for Kailee, said Dr. Moua, who pulled in UCSF pediatric endocrinologist Renee Kinman when Kailee’s little sister started surpassing her in height and weight.

“Kids with CF tend to be shorter and they tend to have delayed puberty,” said Dr. Kinman, a UCSF pediatric clinical professor. “They can’t absorb food as well and they tend to use more calories breathing, so they have less calories left to grow.”

But for Kailee her lack of growth was alarming enough that Dr. Kinman prescribed hormone help. “She’s my only CF patient who is on growth hormones,” said Dr. Kinman. “Right now she’s the average height of a 7-year-old and she’s 11. And her weight is that of an average 8-year-old. We’re hoping to get her past 4-foot 10.”

The bulk of pediatric patients Dr. Kinman sees in the Valley are kids with diabetes or thyroid problems that need hormone help. She recognized the need for doctors like herself and moved to the Valley to help train more with the UCSF Fresno residency program.

Helping with Kailee’s care is Gastroenterologist Michael Haight, because she also requires a feeding tube to deliver special formula directly into her stomach and medications to help her absorb nutrition better.

“Kailee’s normally a pretty happy, confident girl to begin with,” said Dr. Kinman, “but I can tell you she was really happy today when she saw her increased growth on the growth curve.”

Tiny fighter has a few teams helping in the struggle

Kailee loves math so when Dr. Kinman starts showing graphs and talking percentiles on the growth curve, she understands what it means and her eyes light up. The shots she administers to herself daily are working.

Kailee won’t say what she wants to be when she grows up but her parents are seeing a bright future. She’s becoming more confident as she grows, facing TV cameras last year while signing an honorary letter of intent with the Fresno State softball team. She’s part of the Bulldog family and attends every game her health allows.

“The human growth shots are going fine, she’s taking it like a champ,” said her father Sok. “We’re thrilled. Weight-wise and height-wise I think she’ll get there.”

When she was little it was difficult to see those possibilities, said Sok. “She struggles every day. She can’t play sports or be active like every other kid. And it hurts. She asked me and her mom, ‘Why am I different?’ We broke down and cried, because we really couldn’t explain to a 3-year-old.”

Sok’s grateful to have the support of a team of UCSF pediatric specialists to lean on when it gets tough. “It’s heartwarming for them to be with us for this struggle,” he said.