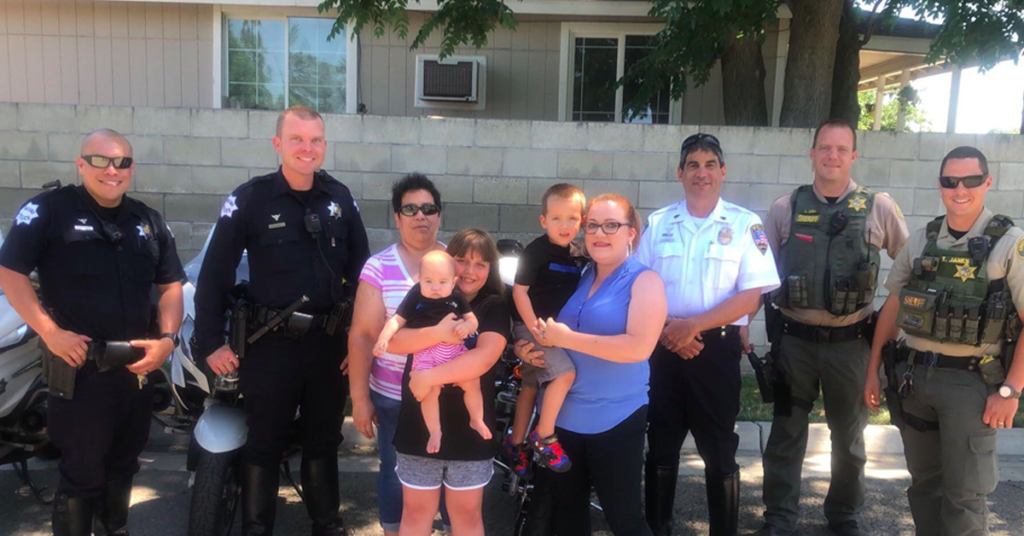 Crystal Giles was standing in the rear parking lot of the Lemoore Police Department headquarters on what was meant to be a solemn day.

Wednesday, officers from Lemoore and beyond were preparing for a memorial procession to Hanford to bring awareness to officer mental health and suicide prevention, in honor of the Corporal.

What followed would lead most evening newscasts on Wednesday as Lemoore City Councilwoman Holly Blair was arrested after leading Lemoore police on a high-speed chase through the city.

“[The procession] did not happen because of [Blair’s] actions yesterday,” Giles told The Sun.

Just before the processional began, Giles had a photo taken with her family and some assembled officers and Sheriff’s deputies.

“We had literally just taken the picture, and [Blair] came blaring through the station’s driveway towards the back,” Giles said. “There was a PD officer in his patrol car trying to leave, and she went straight for him.”

The officer had to swerve his car to miss Blair, Giles said.

Giles and her children ran across the lot to avoid being hit by Blair’s vehicle.

“She was inches – I mean inches – from hitting my nine-year old daughter,” Giles said.

Aside from her nine-year-old, Giles was also accompanying her 4-year-old son and 9-month-old stepdaughter.

“My first reaction was, ‘Oh my God my daughter’s going to get hit,’” Giles said. “And my second reaction was, ‘She about ran that officer over and now she’s on a high-speed chase.’ She flew through two stop signs and kept going – had no remorse for anybody in her path at all.”

Giles said Blair tried to ram officers and bystanders and nearly ran over the Kings County Sheriff’s deputy when he told Blair to stop.

“Now my nine-year-old is asking, ‘Mommy, why did the lady try to hit me?’” Giles said.

Blair was arrested Wednesday and charged with five felonies and two misdemeanors, including assault with a deadly weapon.

She was released from jail Thursday.

“I want to thank the officers for keeping my kids safe – my mother-in-law safe,” Giles said. “One of Jon’s good friends and her daughters were also present and saw it all. I’m glad that all the officers went home to their families, and I’m glad all my kids are still here.”