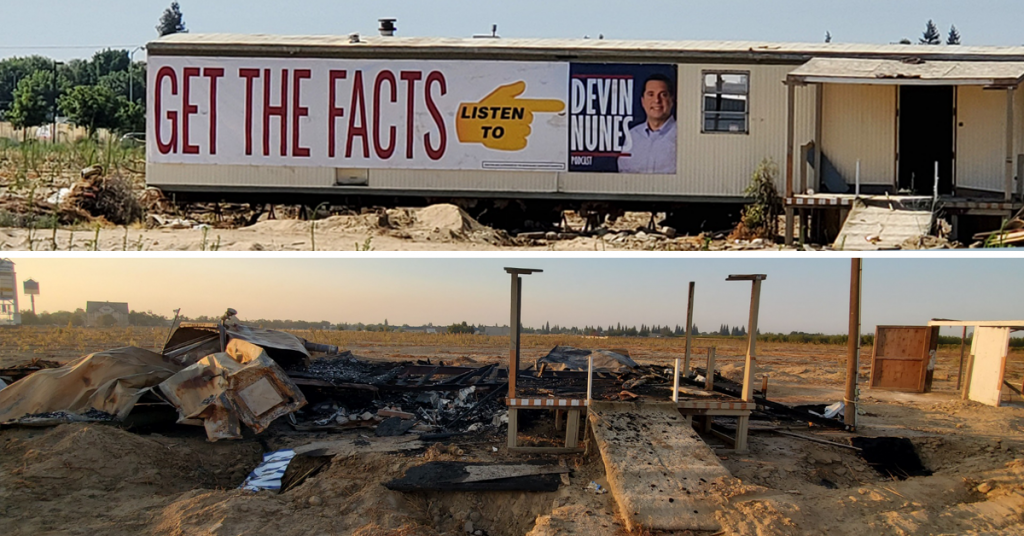 The unique brand of political vandalism that has arrived in the central San Joaquin Valley has taken fiery to a new level.

One day removed from a repeat arson on a Dinuba haystack featuring signs for Rep. Devin Nunes (R–Tulare) and President Donald Trump, vandals set fire to a different property, this time in Kingsburg.

And the target of flames wasn’t a mere haystack – it was a mobile home.

George Matoian, a farmer and owner of the property north of the Sierra Street exit along Highway 99, said the home was one of two such mobile homes placed on the property.

The other home is currently occupied by squatters who – due to California’s eviction moratorium – cannot be removed from the property.

Matoian said he was alerted by Fresno County CAL FIRE officials around 2:17 a.m. on Monday that the mobile home was set ablaze.

The Kingsburg farmer said it wasn’t the first vandalism attempt at his signs, and the vandals themselves were quite brazen.

“The property is right off the freeway and highly visible,” Matoian said. “It’s not like anyone could just sneak around and not be seen by cars.”

Prior to the arson of the mobile home, individuals had attempted to light the Nunes sign on fire to no avail. Monday morning’s arson required an accelerant, he said.

One side of the home featured a banner for Nunes’ podcast. The other, Matoian said, featured Trump signs and flags along with the American Flag.

“Is it surprising? No,” Matoian said, giving a sigh. “But it is disappointing.”

For Matoian, unlike Dinuba farmer and livestock auctioneer Jon Dolieslager, whose property has twice been the victim of arson for its political signage, the next headache is dealing with his insurance company to recoup the losses taken at the hands of vandals.