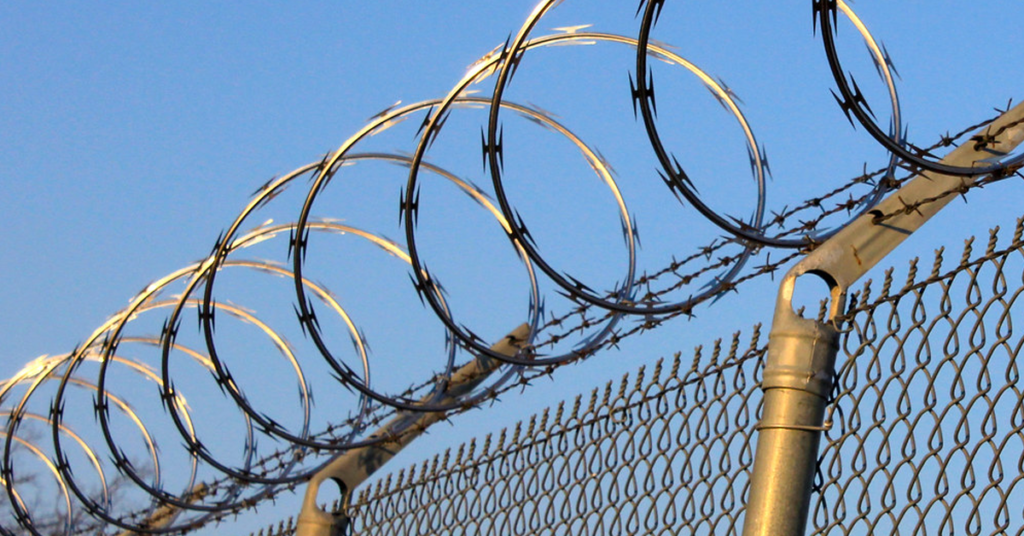 Council Members Luis Chavez and Garry Bredefeld want to give Fresno business owners in certain parts of town another option when it comes to combating theft and vandalism.

City code currently permits the regulated use of barbed wire on security fences. Chavez and Bredefeld want to add the use of razor wire.

Barbed wire, often associated with livestock security in rural settings, is increasingly common in commercial and industrial areas of cities. Wikipedia describes barbed wire as “a type of steel fencing wire constructed with sharp edges or points arranged at intervals along the strands.”

Razor wire is a more imposing type of wire used for security purposes. Wikipedia describes razor wire as “much sharper than the standard barbed wire; it is named after is appearance, but is not razor sharp. The points are very sharp and made to rip and snag clothing and flesh. The multiple blades of a razor wire fence are designed to inflict serious cuts on anyone attempting to climb through and therefore have a strong psychological deterrent effect.”

Chavez represents District 5, which covers much of Southeast Fresno. It is a district that is seeing strong growth in both the residential and commercial/industrial sectors. Speaking to The Sun by phone, Chavez said of razor wire on security fences: “There is a time and a place for this kind of deterrent. I think we’ll come up with something that works for the city as a whole.”

Chavez said he has spoken to many business owners who have been victimized by thieves and vandals.

Bredefeld represents District 6, which covers much of Northeast Fresno. This district has smaller industrial base than, say, Districts 5 and 3 (that’s because of the way Fresno’s surface transportation network is laid out). But District 6 does have a substantial and thriving commercial base.

Bredefeld told The Sun that he, too, is listening to the security concerns of business owners trying to protect their property in a law enforcement environment that itself is full of complex challenges.

Chavez and Bredefeld describe a situation ripe for some astute policy-making.

At the same time, it’s no secret that Fresno has all of the property crime challenges that one would expect in the nation’s 34th largest city. Fresno long ago passed the half-million mark in population. Who commits this property crime? Chavez and Bredefeld choose their words carefully when answering such a question. It’s sufficient here to note that both Council Members say there is considerable wisdom in allowing property owners so inclined to use razor wire as a security measure.

Finally, there’s a limit to what police can do when it comes to protecting all of the commercial and industrial property in a city covering more than 110 square miles. Officers are getting calls for service 24/7. Many calls involve life-threatening situations. Someone seen hopping a vulnerable security fence at midnight in an industrial area may not be the most important call on an officer’s plate.

Deterrence thus assumes more importance for both City Hall and the property owner.

Chavez and Bredefeld said their proposed amendment is tailored to meet the needs of other property owners. For instance, both Council Members say razor wire has no place in residential neighborhoods. In other words, their intent isn’t to give Fresno the appearance of a war zone.

Derrill Biddy, owner of Affiliated Recovery, wrote a letter to City Hall in support of the Chavez-Bredefeld proposal. The letter was posted on the City Clerk’s website.

The amended code “will have ramifications for many Fresno business and commercial districts,” Biddy wrote. “By making it more difficult for thieves to easily climb over a chain link fence, barbed wire or razor wire along the top of the fence can prevent climbing and break-ins. Industrial districts and construction sites in Fresno will especially benefit by preventing vandalism and damage to expensive equipment.”